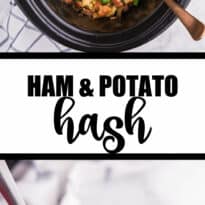 Slow Cooker Ham and Potato Hash is the perfect day-after-Christmas meal! Throw your leftover ham in a Crockpot with some hash browns and onions for an amazing one-pot meal for any time of day. 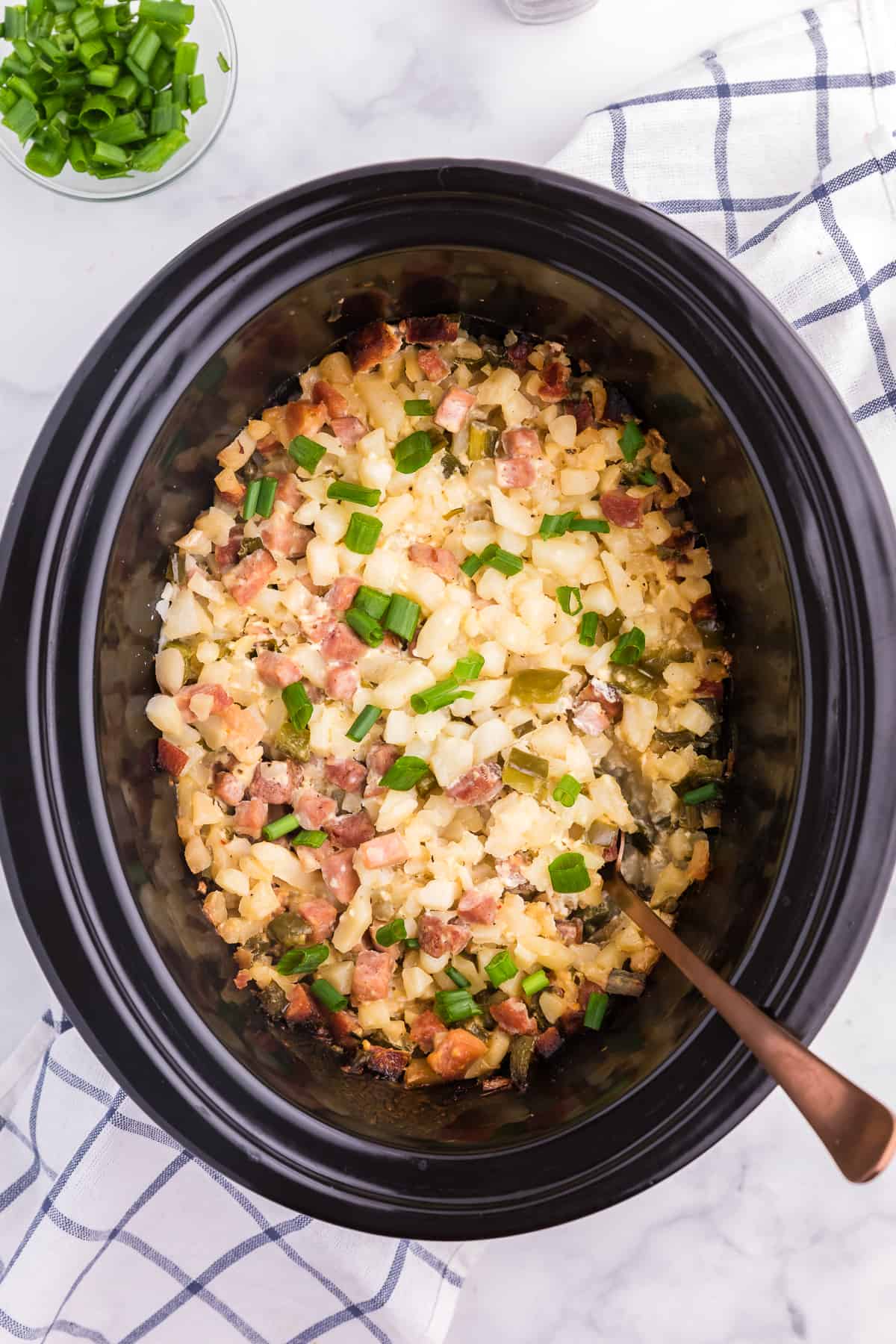 I’m not sure if this recipe for Slow Cooker Ham and Potato Hash is a breakfast recipe or dinner main dish. I think it’s both! It’s definitely a tasty way to use up leftover ham and doesn’t require much prep work.

Plus, it’s a Crockpot recipe and it’s that time of year again. I love that it doesn’t require a full day of cooking time. You could put it on at lunch and it would be ready to serve in a few hours! 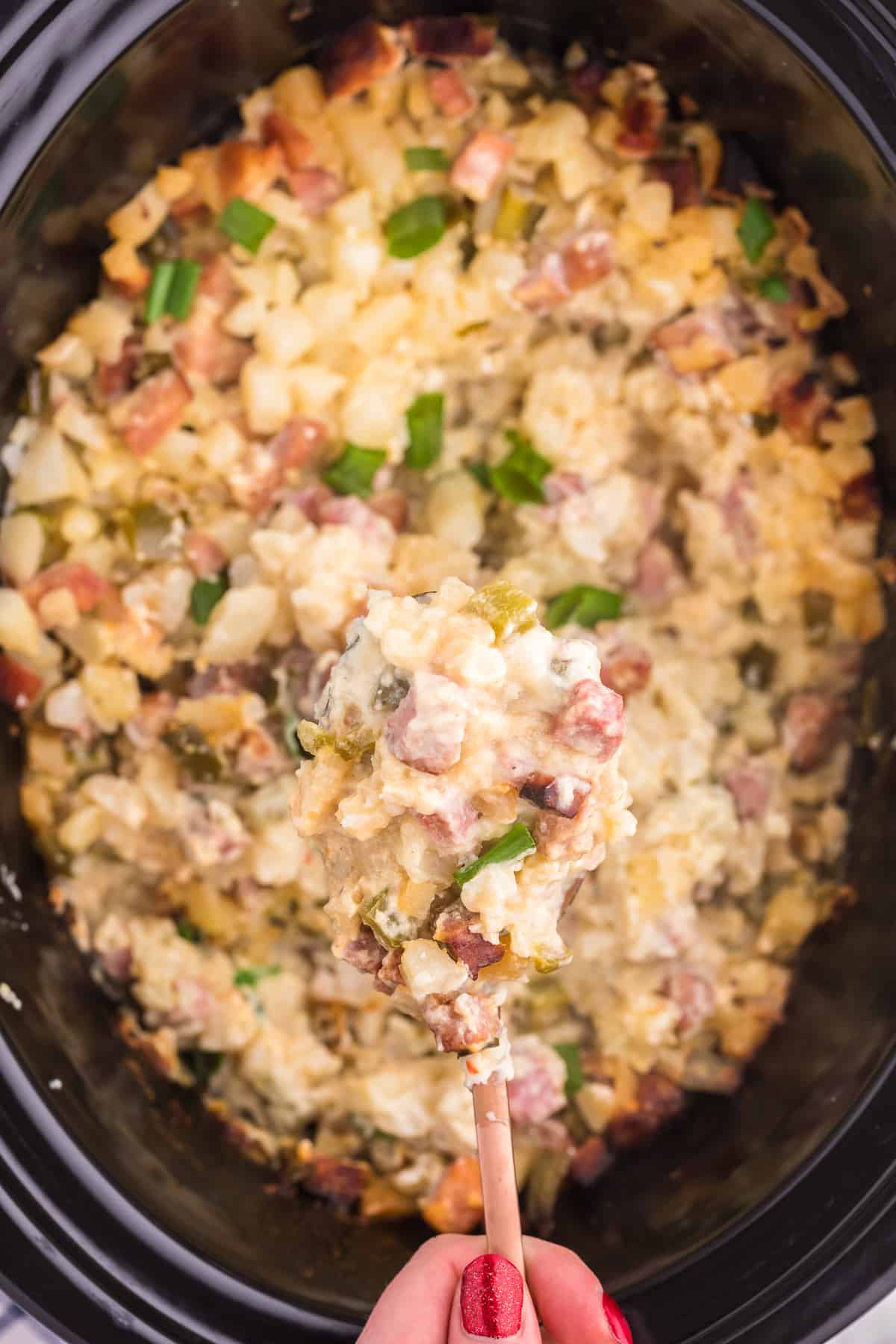 Frozen hash browns are so versatile and cheap! It’s easy to turn frozen potatoes into a great breakfast dish or fast and filling dinner (like this Lasagna Tater Tot Casserole).

Ham and potato hash is one of those empty-the-produce-drawer recipes for me! You can add white onions, other peppers, shredded cheese, diced tomatoes, or even make it a sweet potato hash! 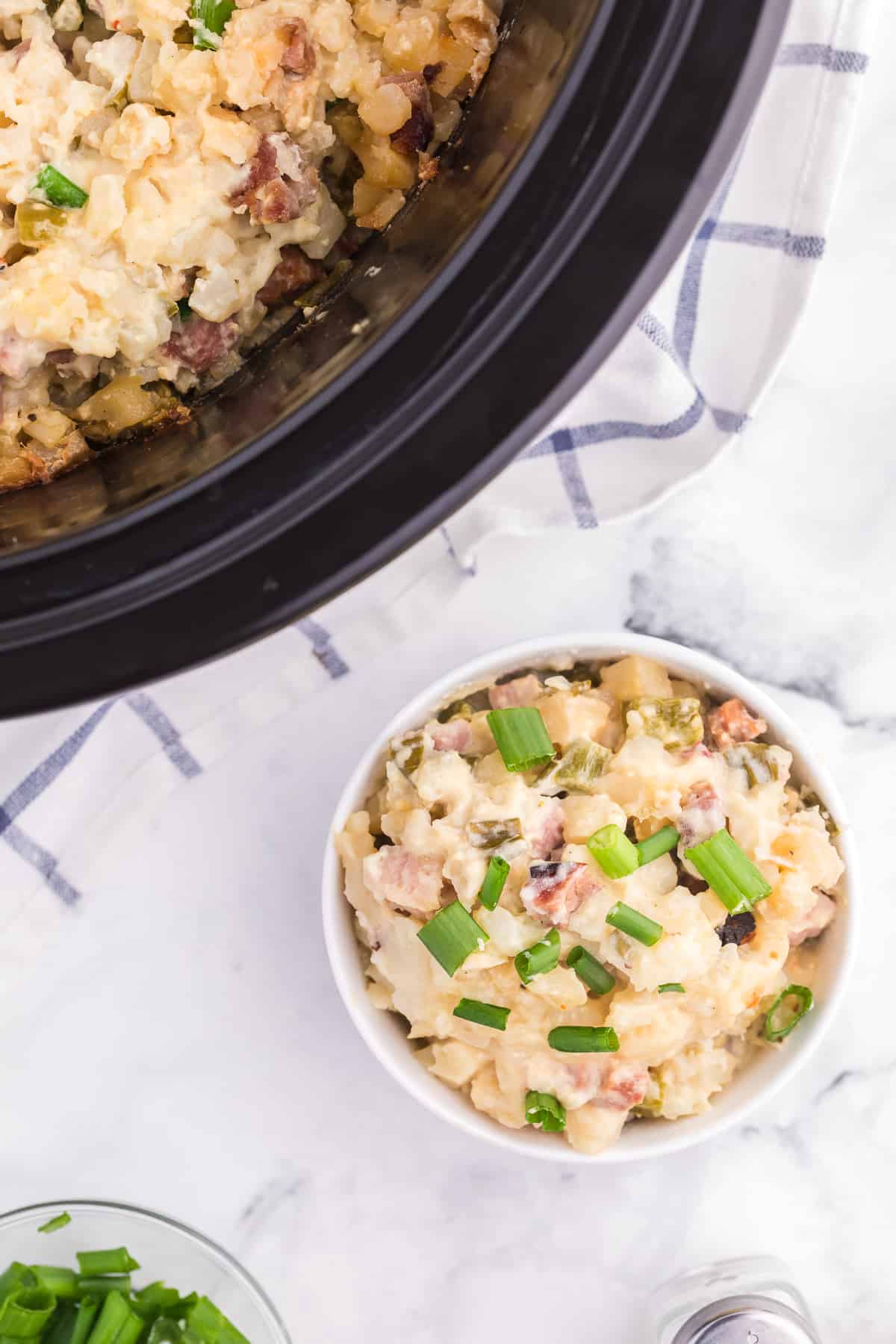 What I used for my Crockpot Ham and Potato Hash

How to Make Slow Cooker Ham and Potato Hash

Serve warm garnished with green onions, shredded cheese, or a dollop of sour cream.
There are never any leftovers when I make this Crockpot recipe! Creamy potatoes, salty ham, and a bit of veggies makes this comfort food a winner in my book.

When you DO have leftovers, they’ll last up to 4 days in the fridge. I don’t recommend freezing this hash casserole because the potatoes have already been frozen once.

You can easily reheat the ham and potato hash in a skillet or in the oven! Just check every few minutes until it’s heated through. 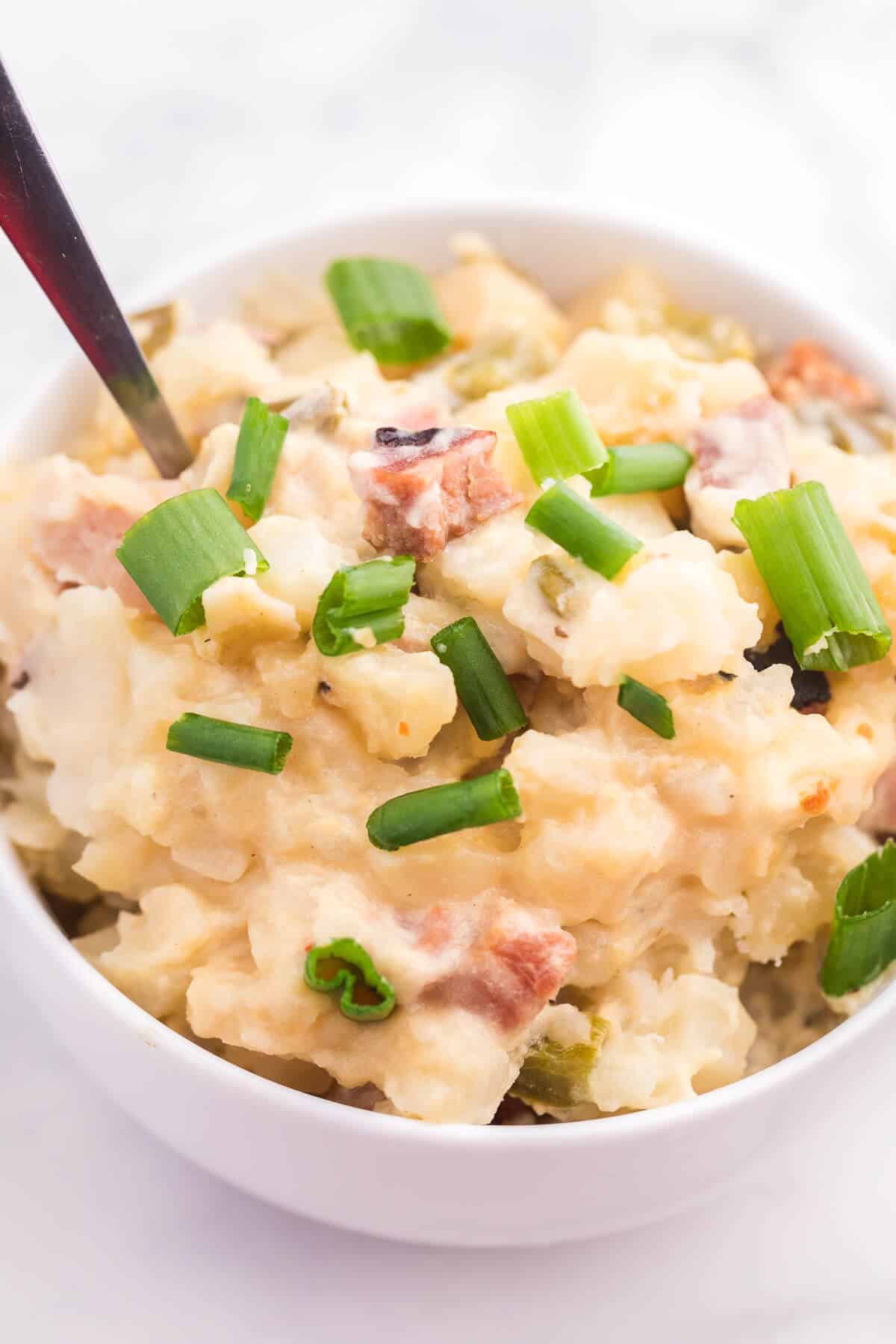 Can You Put Raw Potatoes in a Slow Cooker?

You can put anything in the Crockpot! Literally, it’s such a great kitchen tool for slow roasted meats, simmered soups, and decadent desserts like this Chocolate Peanut Butter Cheesecake.

Raw potatoes are easy to cook in the slow cooker. These frozen hash browns cook in a flash since they’re so thin. However, you can make whole raw potatoes in a Crockpot, too!

Like all Crockpot recipes, you need some liquid in the pot to help create steam. For small potatoes, you want to cook them on high for about 4 hours or on low for at least 6 hours.

The larger the potato, the longer it will take to cook! You can tell potatoes are done if you can pierce through the center without resistance.

What to Serve with Ham and Potato Hash

I always make Slow Cooker Ham and Potato hash for brunch the day after Christmas. There’s no better way to use leftover ham!

There’s no more perfect brunch dish than quiche. It’s got EVERYTHING: eggs, veggies, and a flaky crust. I love a classic Quiche Lorraine, but sometimes there’s nothing better than a super simple crustless quiche with bacon, spinach, mushrooms, and of course cheese.

I grew up eating this Mediterranean Brunch Bake on Christmas morning. It’s so flavorful with olives, zucchini, red peppers, tomatoes, and feta cheese all bound together with fluffy scrambled eggs.

French toast is a breakfast favorite in my family, but it’s hard to serve it for a crowd. French toast casserole takes the guesswork out of servings! This one’s as delicious as apple pie but acceptable for breakfast, of course.

Need an overnight brunch recipe? Try this overnight bacon breakfast casserole that’s so savory and delicious with loads of bacon and plenty of cheese.

Other amazing recipes to try…

Do you have any amazing leftover ham recipes? I’m always looking for more recipes to try! Follow me on Instagram @simplystacieblog, on Facebook at Simply Stacie, and on Pinterest @SimplyStacie and let me know how you liked this and my other recipes!

If you can't find garlic pepper, you can use a garlic seasoning. 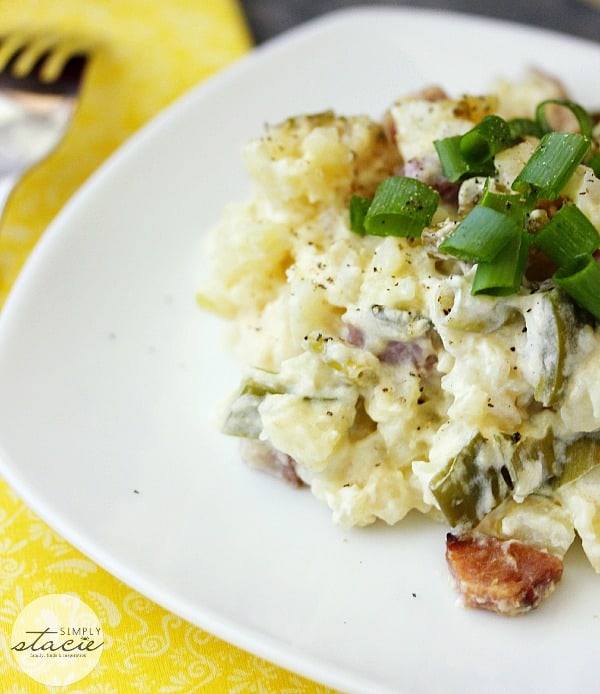 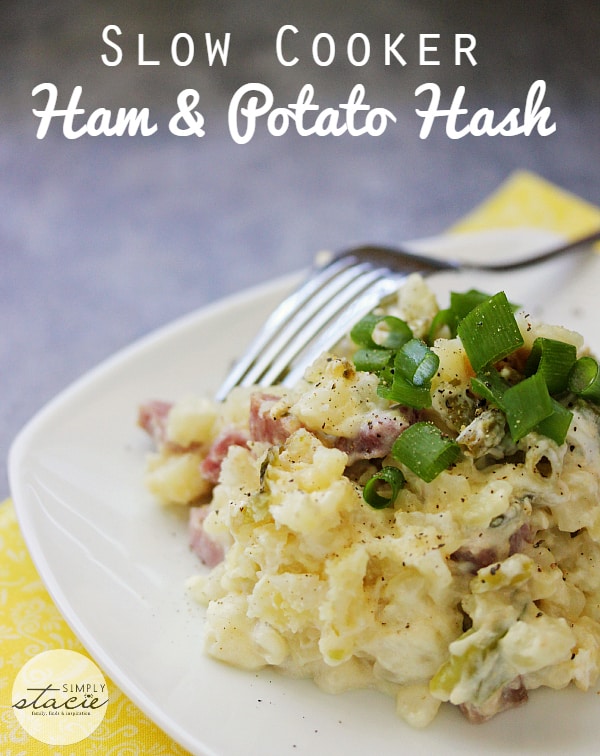 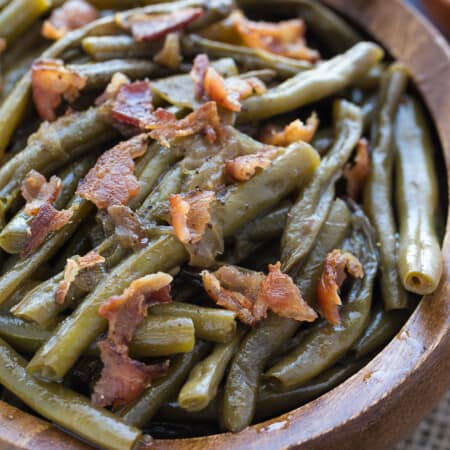 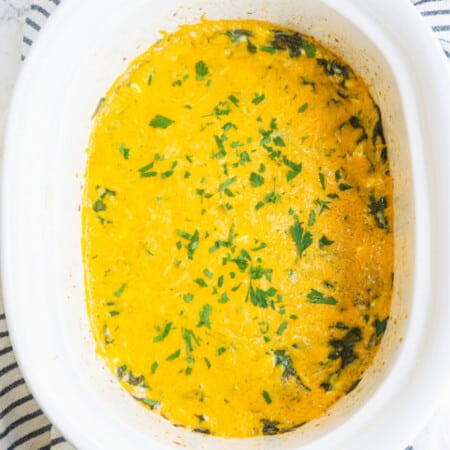 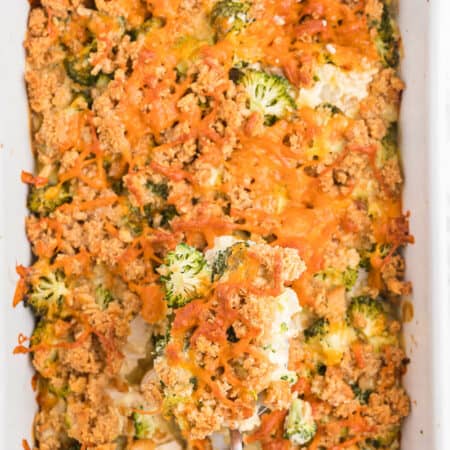