Cherry Cheesecake with Oreo Crust is one decadent dessert. Oreo crust that is filled with a creamy and velvety smooth cheesecake layer, and topped with a homemade cherry filling.

Hi all! Nicky here, calling in from Kitchen Sanctuary with a recipe for a delightfully wicked cheesecake. 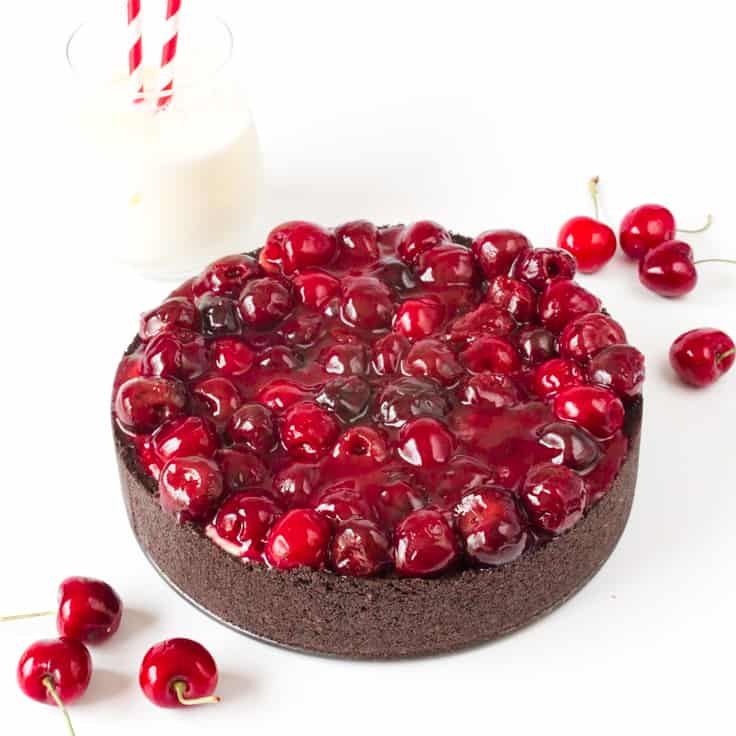 I hope you like Oreos (who doesn’t like Oreos!) as this recipe contains, erm, quite a few.

Ignoring the two (ok 5 or so…) that end up in my mouth whilst I’m making this, we’re talking two whole packs in the base of the cheesecake, and then pretty much another pack crumbled into the no-bake cheesecake filling.  So it may be worth saving this recipe for a day when you need an indulgent treat.

You won’t be disappointed though.  In fact you may not want any other cheesecake again in your whole life!!

I’ve finally got the technique right for getting the perfect crust.  A measuring cup, a spoon, and a little bit of patience, and you’ll have a lovely, thick and even crust to hold all of that creamy filling. 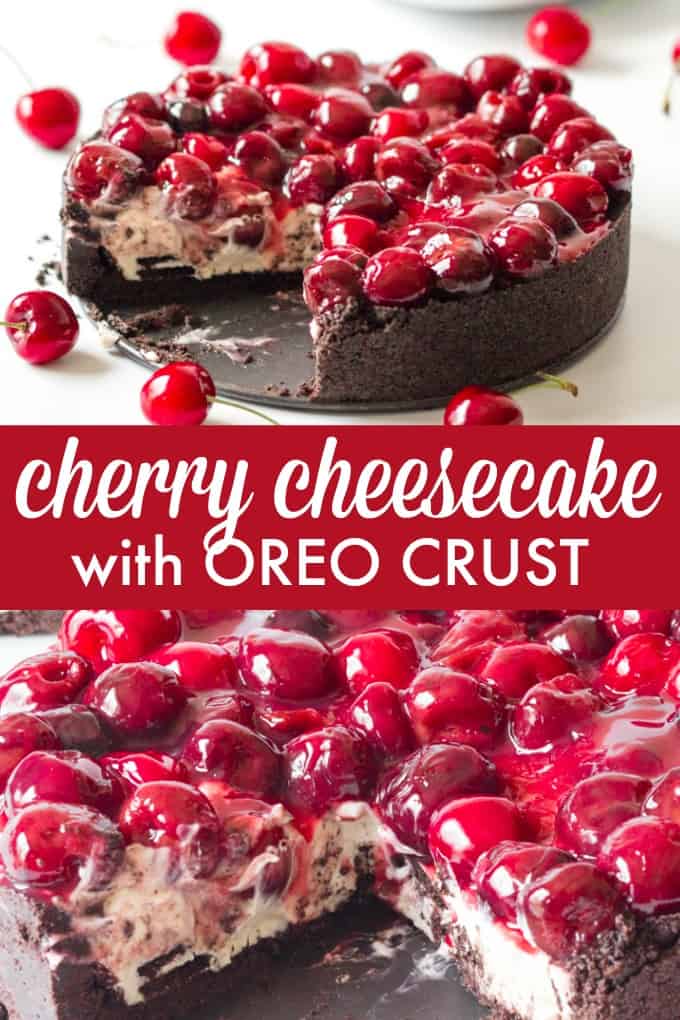 Can I Use a Regular Graham Cracker Crust

Yes, if you don’t want to use Oreos you can use a classic graham cracker crust. Just make it as normal and then press it into the pan to make a pressed crust.

You could also swap out the regular Oreos for even a Golden Oreo if you wanted a different flavor component to the crust.

What Type of Cherries Do You Use for Cherry Filling

The topping can be made from fresh, frozen or even tinned cherries. I like to use a mixture of tinned and fresh, as this results in cherries of different shades, that I think looks quite nice.

The addition of a little kirsch or cherry brandy really takes the flavor to the next level, but if you’d rather leave it out, you can just add a little bit of cherry jelly mixed with water, or even a drop of cherry or almond extract. 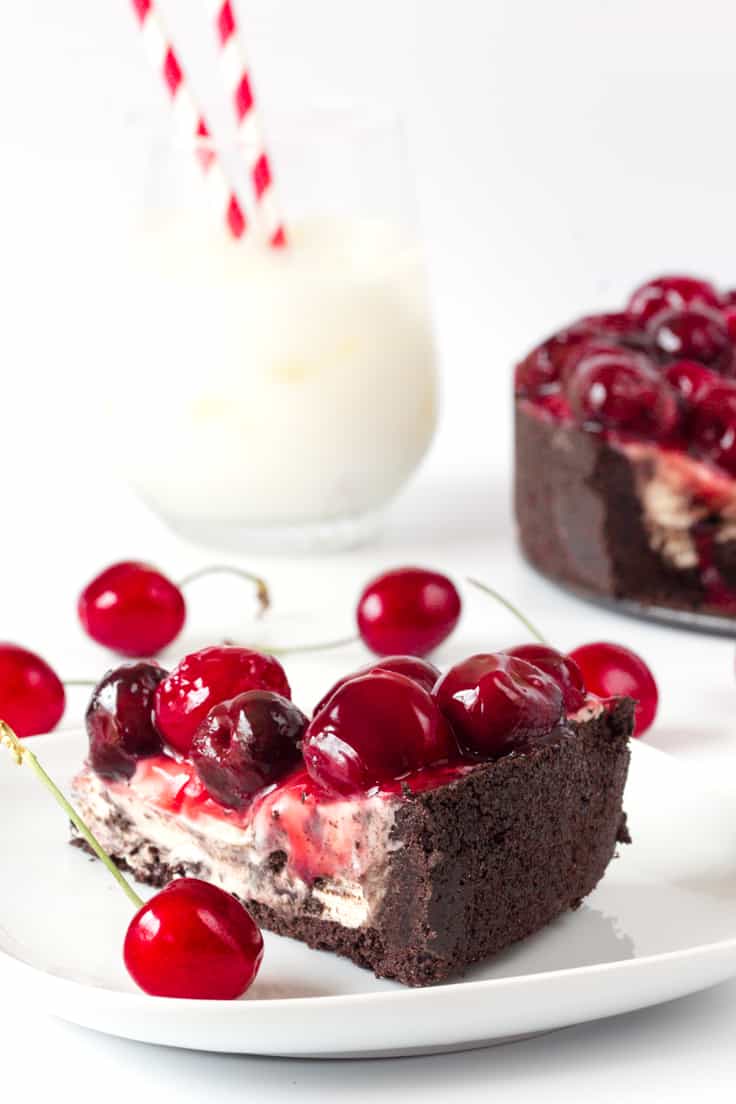 Can I Use Canned Cherry Pie Filling Instead of Homemade

Yes. If you want to cut a corner and skip the homemade cherry filling, go ahead. Of course, it will change the flavor a bit but I get if you don’t want the extra steps of making the filling homemade. In that case, buy a can or two and use that instead of homemade. Load up as many or little of cherry topping as you would like.

So grab a fork and maybe a bib, as this cheesecake is creamy, sticky and a little bit messy. If you’re anything like me though, you wouldn’t want it any other way. 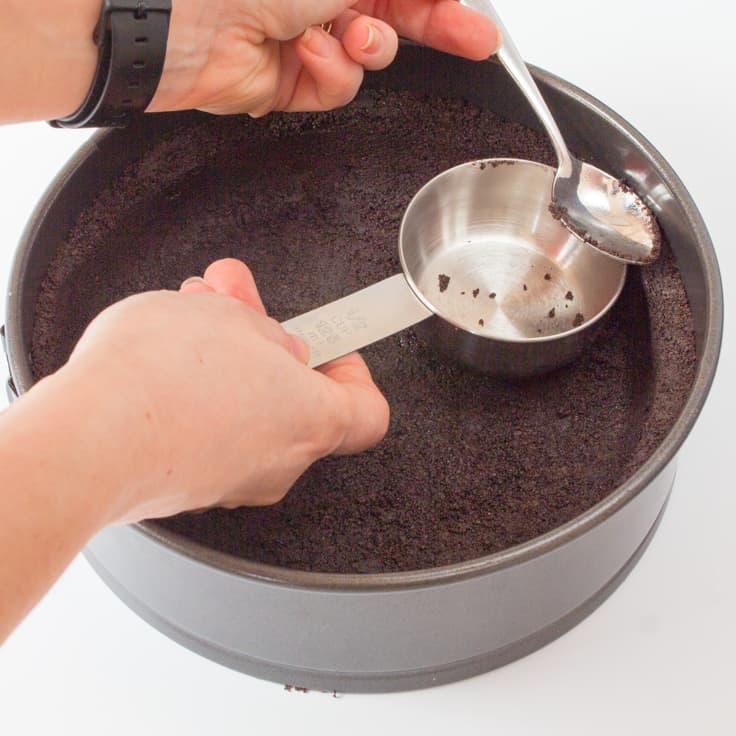 Do You Bake This Cherry Cheesecake

No, this is a no-bake cheesecake dessert. You will prep the crust, whip up the filling and top with the cherry topping. It is crazy easy to whip up and boy is it an incredibly indulgent dessert. 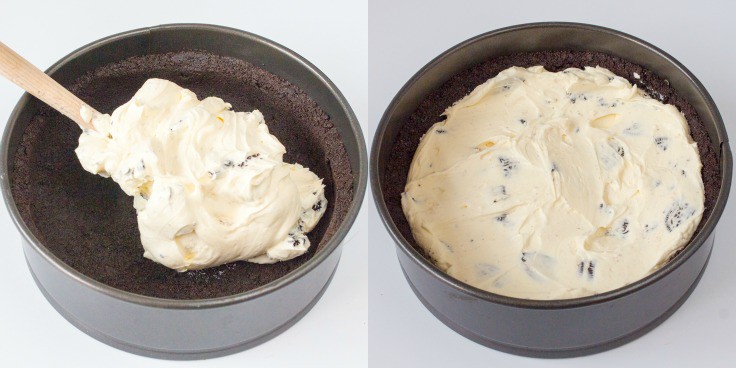 How to Make a Cherry Cheesecake with Oreo Crust

Start by pulsing up your Oreo’s in a food processor until they are coarse crumbles. Then you will mix with the butter and create a crust that you firmly press into your cheesecake pan.  Store in the fridge while you prepare the filling. To do the filling you want to take a stand mixer and whip up the cream until it creates soft peaks. Then fold in your cream cheese and pour over the Oreo crust. Place in the fridge to store.

Now grab a pan and work on your cherry filling. Prep your cherries and place on a pan with sugar, lemon juice, and the brandy and vanilla. Heat on low until sugar has dissolved. Then pour cornstarch mixture while stirring. This will thicken the sauce. Allow the cherry mixture to cool, before pouring over the cheesecake mixture. Chill for around an hour before serving. 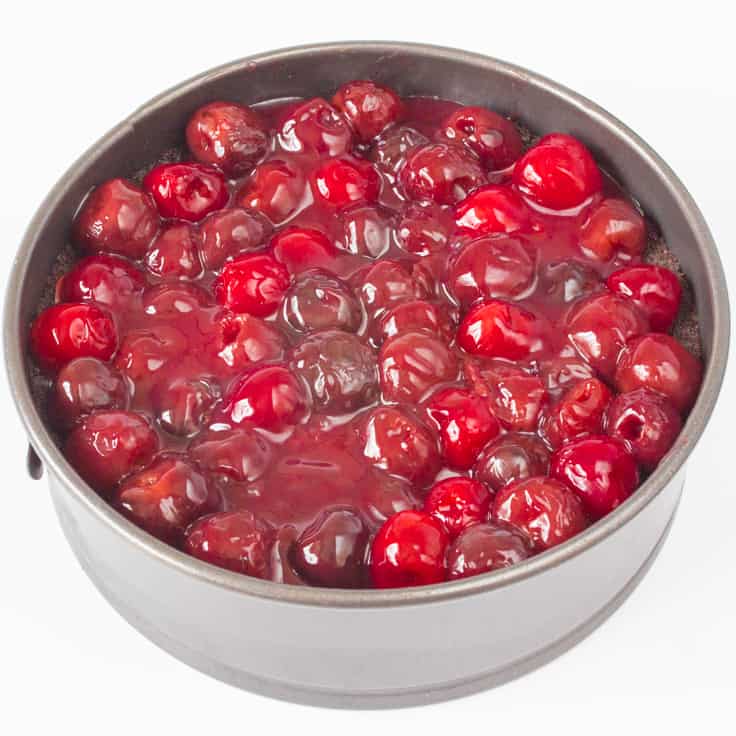 How to Store Cherry Cheesecake

Your cheesecake needs to be refrigerated. Because of the cream cheese base, it can’t stand up being left on the counter. Try not to have your cheesecake out on the counter for more than 2 hours at a time. The USDA recommends not letting it sit out for longer than two hours due to bacteria growing more rapid. 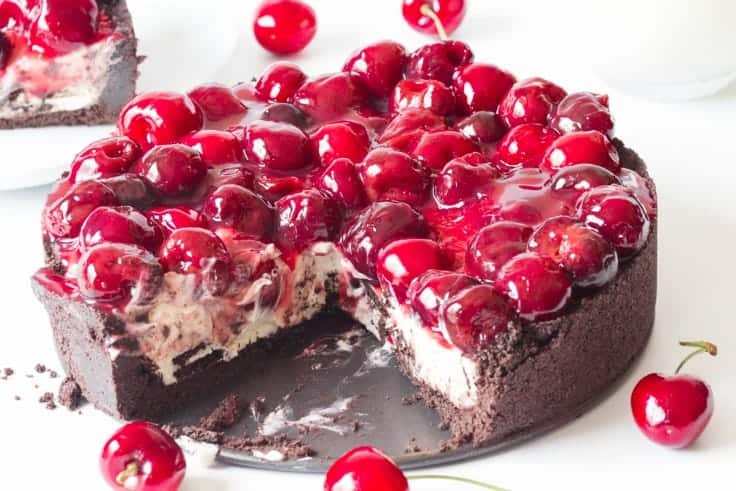 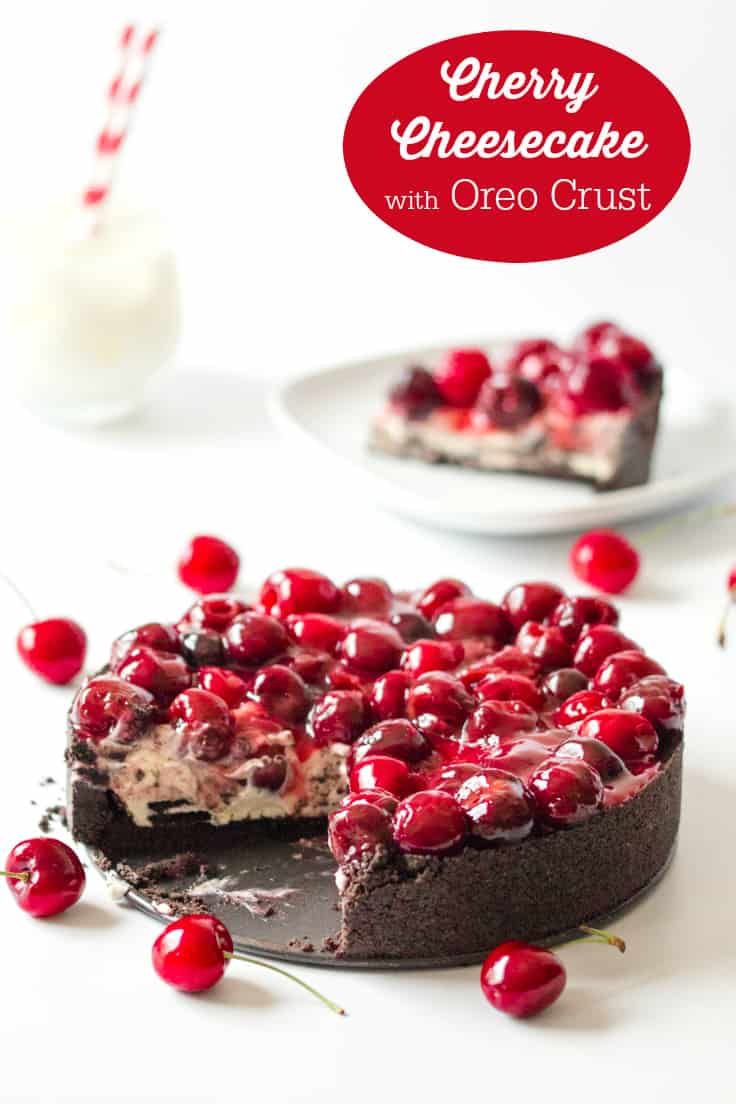 How Long Will Cherry Cheesecake Store in Fridge

You can store this cheesecake in the fridge for 3-4 days. I always recommend using your best judgment in terms of if you feel the cheesecake has gone bad. 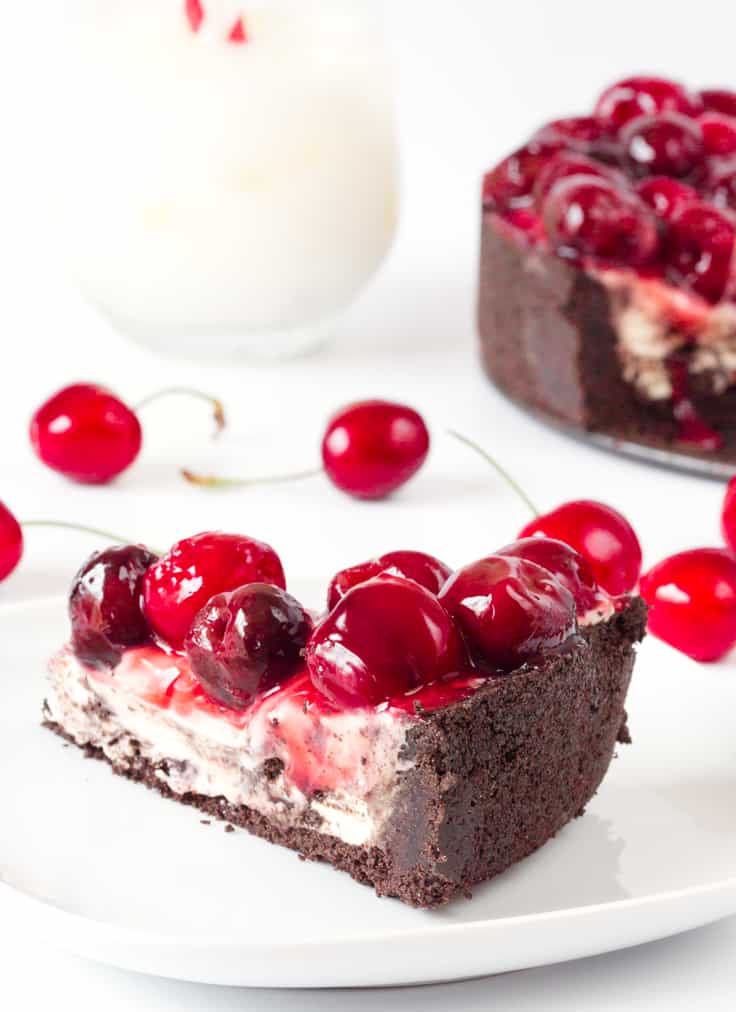 I hope you enjoy this recipe, we love it. It is a few steps but the outcome is totally worth it.

Indulgent Cherry Cheesecake with Oreo Crust recipe made from scratch. To top it off, it’s a sinfully good no-bake recipe! 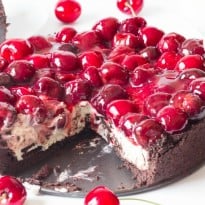