Depression Era Recipes to Bring Your Cooking Back to Basics

Sometimes the simplest recipes are the best and if you want to get ‘back to basics’ with your cooking, Depression era recipes can be a great starting point. 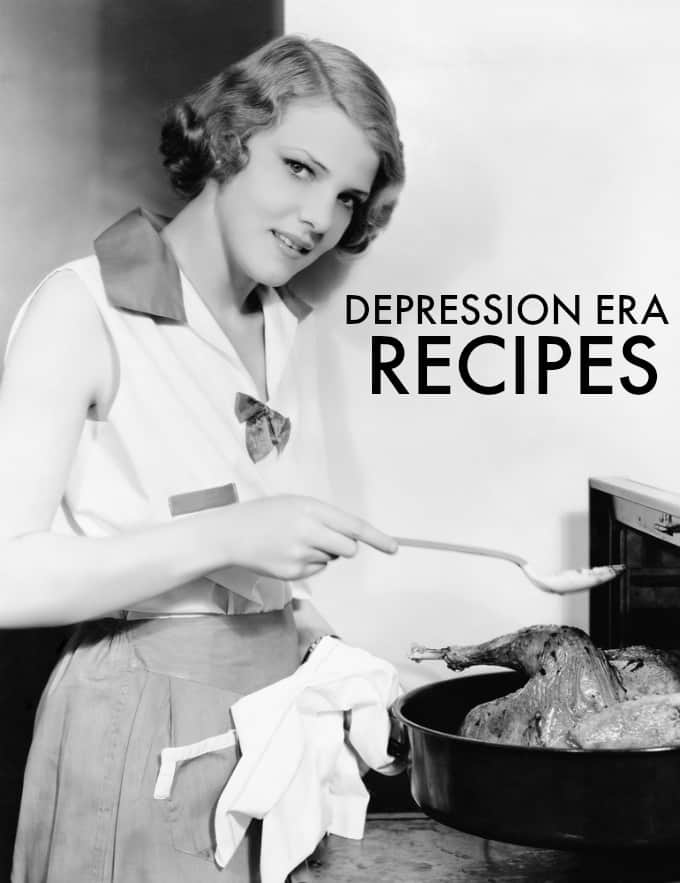 For so many of us, cooking every day has become a chore. From the one kid who is ultra picky and won’t eat anything that has ‘green’ in it, to the spouse who is a fan of meat and potatoes and little else, finding ways to remain inspired in the kitchen can be tough.

And it can be expensive too. Organic this and free range that starts to add up, so if you think back to the Depression era, when kids were plentiful but money was not, how did they feed their families creatively and not end up with scurvy?

A good way to cut the budget, however, is to limit your family’s intake of meat. Beans and cheese were two well used sources of protein during the Depression. Of course, this was the era of cheap hot dogs, Spam and fried bologna too, so you don’t have to go far to find creative ways that meat was included as part of, but not as the main staple, of a dish.

Whether you opt for hot dogs, as would have been done during the Depression, or perhaps some nicer sausages from your local butcher, plating them with baked beans gives your family the protein and fibre they need that will fill them up nicely! Add a little onion to the beans too, for some extra flavour. And it’s a GREAT option for camping out!

Hot dogs and potatoes: two staples in the Depression era cooking. They were cheap, plentiful and filled you up.

Fry a cubed potato with onions, and when it’s all softened and browned a little, add slices of hot dog. That’s dinner! A more modern take on this might be to use ham steak instead of hot dog and add a little tomato sauce for flavour, and a side of smothered cabbage (see later on!)

Creamed Chipped Beef on Toast is one of those recipes that is typical of the era and that you couldn’t get me to eat for love or money, but since it was ubiquitous in the 30s, I’ve included it here.

With potatoes being a staple item, potato soup was almost inevitable! The Depression era version involved boiling four chopped up potatoes in two cups of water with two tablespoons of bacon grease and some salt and pepper.

Take this recipe up a notch for today’s standards and add a chopped medium onion, celery salt. Bring that the the boil and mash the potatoes slightly when they’re cooked through. Then add two cups of cream (half and half will do) and simmer until heated through. You can serve it with cheese on top to make it extra tasty!

Use up leftover mashed potatoes in a snap!

The very idea of throwing out leftovers was just unheard of. So finding creative ways to make them palatable was essential like this recipe for Mashed Potato Cakes.

A little bit of everything

When it came to Depression era cooking, it was often best to use up whatever was available in new ways.

Named for the era’s US President, Herbert Hoover, this was served at soup kitchens across the country: Cook noodles like macaroni until almost done, drain then return them to the pot and add hot dogs, canned stewed tomatoes, and canned vegetables like corn or peas. Bring the whole lot back to the boil and then simmer to heat through and finish cooking the pasta.

Spaghetti with Carrots and White Sauce

Apparently touted by Eleanor Roosevelt as being a simple and accessible meal, the idea was to mix cooked spaghetti with boiled carrots and a basic white sauce (milk, flour, salt, butter and a bit of pepper). Put it in a casserole and in the oven to bake.

Don’t forget the side dishes!

Adding bulk to a meal didn’t always involve potatoes. Other vegetables also made an appearance on Depression era tables, including cabbage in this recipe for Smothered Cabbage.

While dessert wasn’t a priority in Depression era eating, there were occasions to celebrate and there is a uniquely Canadian dessert that fits the bill: Pouding Chômeur (otherwise known as Poor Man’s Pudding)

This French-Canadian staple from the Depression era is still on menus today. It’s a classic and so easy to make!

Do you have any recipes passed down from grandparents that are typical of the Depression era? Any favourites that you still cook today?