Pets » 5 Foods You Should Never Feed Your Dog

5 Foods You Should Never Feed Your Dog

Sure, we love our FurKids, but some ‘treats’ aren’t a treat at all.

Having a dog is a pleasure beyond compare! They greet you when you get home. They’re always happy to see you—unlike surly teenagers! They will cuddle you when you’re sad… They’re awesome! So as a gesture of love, many people think that they are expressing love back when they give their dogs special human food treats. After all, the way to a dog’s heart is through it’s stomach. Oh wait, that’s a man. Anyway… The POINT is that treats and certain foods aren’t always good for our four legged friends; some can be downright dangerous.

Part of the reason this happens is that dogs metabolize foods differently than humans and even other animals do. Their bodies break down the food at a different rate and that’s how some foods can become toxic to them, yet not affect us in the least. 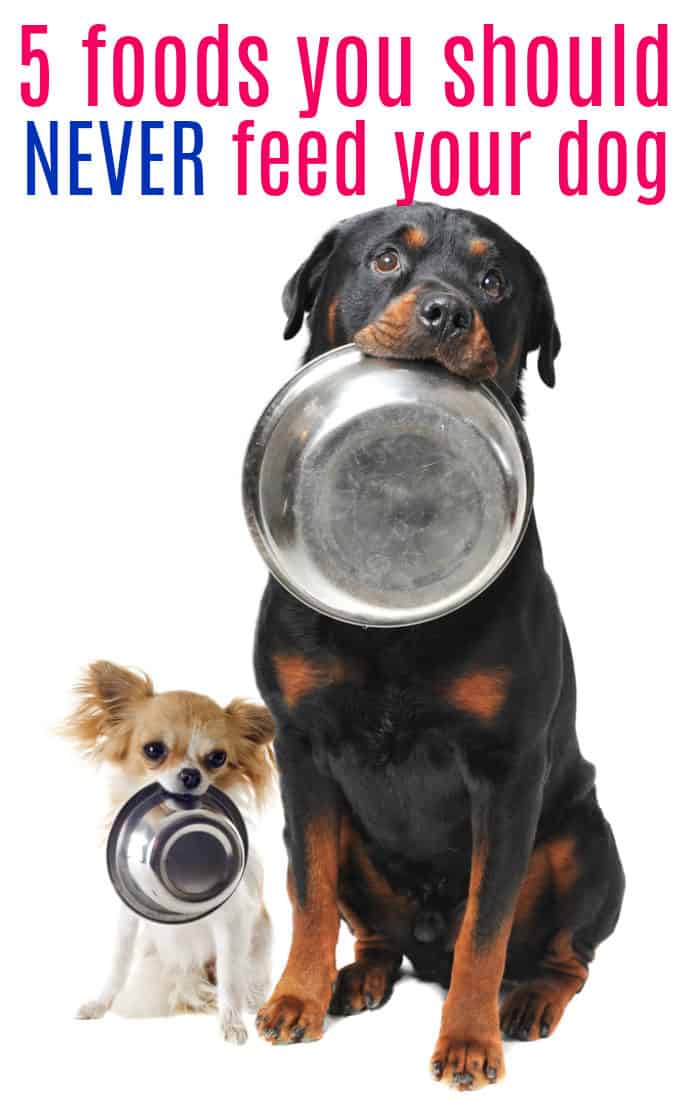 Foods You Should Never Feed to a Dog

Here’s a list of the some of the foods that you should never feed to a dog:

Foods that are toxic to dogs

1. Chocolate— This is a well known one, but bears repeating as every year, veterinarians face cases of dogs who have been poisoned by ingesting chocolate. Chocolate contains a chemical compound that humans metabolize quickly but dogs don’t: theobromine. It builds up to toxic levels in dogs and is similar to caffeine in terms of its effects: it can cause diarrhea, vomiting, cause cardiac issues including irregular heartbeat and even a heart attack. If you suspect that your dog has ingested chocolate by accident, get to a vet or vet emergency clinic right away!

2. Corn on the Cob— The corn isn’t so much the issue here, although too much of that can upset their digestive systems. Really, the issue is the cob. If a dog ingests a cob, it will most likely block their small intestine and have to be removed surgically, as they are unlikely to ‘pass’ it.

3. Grapes and Raisins— While the ingredient in grapes (and their dried counterparts) that causes toxicity in dogs has yet to be identified, it is well documented that grapes, in sufficient quantities, can cause acute kidney failure. The quantity would obviously depend on the size of the dog so it’s best to keep your dog away from this fruit in particular.

4. Onions and Garlic— All types, including chives, contain a compound called N-propyl disulfide that can contribute to anemia and red blood cell damage in dogs (cats too!) by damaging the hemoglobin, the substance that carries oxygen to cells. Avoid giving them human foods that contain onion or garlic, including dried or powdered varieties.

5. Xylitol— This sugar substitute is found in many things including gum, candy, and is sometimes used in ‘no sugar’ options of cakes and breads. This ingredient, even in a small quantity, can cause seizures, liver failure, hypoglycemia and, in sufficient quantities, death. This is definitely not something you want to mess with, around your dogs.

Dogs are best fed a natural raw food diet as directed by a vet, or commercially prepared foods with natural ingredients. While we humans might think it is the height of loyalty and love to share some human food treats with our pets, you could be doing them a fair bit of harm and not know it!

What do you feed your dog on a daily basis? Do they like it or are they picky eaters?