Reviews & Giveaways » Travel » What Not to Miss in Calgary

What Not to Miss in Calgary

See and do it all, but please resist the temptation to yell “Yeehaw”!

Say Calgary and thoughts turn to mountains and cows and one of the coolest mayors in the country (Seriously Naheed Nenshi, you’re awesome!) Such thoughts aren’t far off the mark for a place nicknamed ‘Cowtown’ in homage to its beef cattle roots, but there is SO much more to Calgary than stetsons and boots. As the song says, these boots are made for walking and so is the city of Calgary.

Filled with interesting neighbourhoods, you’re just as likely to go past someone wearing a suit as a stetson and that’s okay with the laid back and almost frontier-like mentality that envelopes this city that is the gateway to the Rockies. 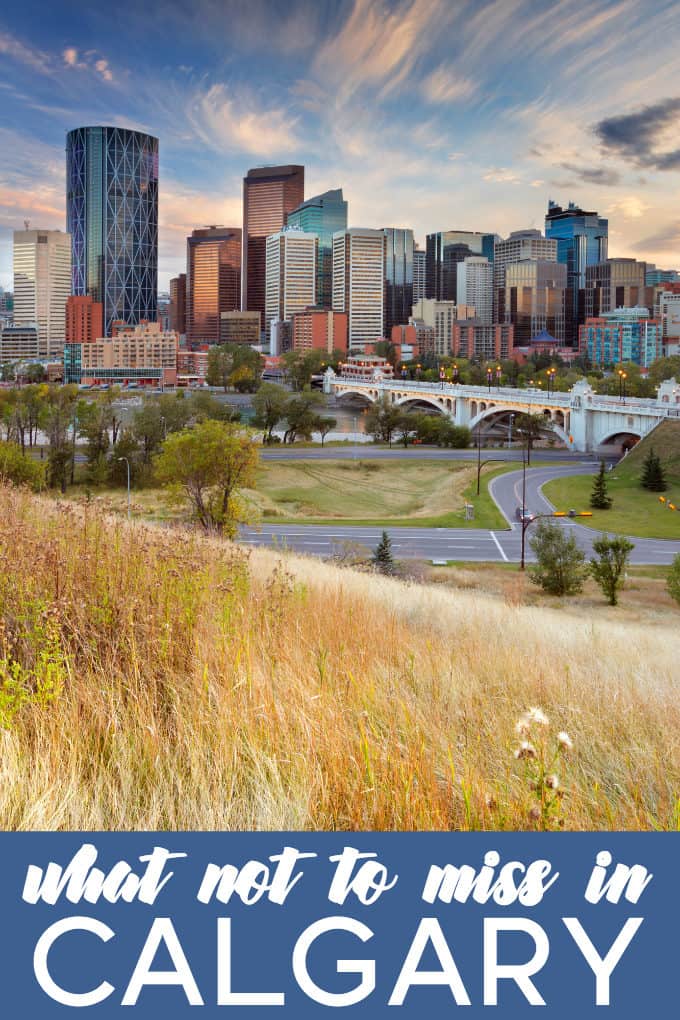 What to eat in Calgary

Aida’s Bistro — Forget steaks and burgers! Instead, why not try out Calgary’s not to be missed Lebanese food! This family run restaurant has something for everyone and is located in the heart of downtown. It’s a favourite for visitors and locals alike.

Reader’s Garden — Escape the hustle and bustle of the busy city in favour of a quiet oasis of the Reader’s Garden cafe. You’ll start with a stroll through the Rock Garden and find yourself in the historic building on site that houses a unique and calming place to take a break.

Spolumbo’s Deli — For a belly busting deli lunch and some of the best sausages around, you have to stop in at Spolumbo’s. Do you know the difference between a Reuben and a Rachel? If not, take a peek at what’s on offer at this popular and bustling deli!

Charbar — You can’t enjoy Calgary’s eats without enjoying a goodly amount of its signature dish: steak. While not a ‘traditional steak house’, Charbar is pushing the frontier of steak—apropos for the city of Calgary, don’t you think—by dry ageing their beef anywhere from 70 days and up to get tender and fully flavoured cuts, and then preparing them on a traditional Argentinian wood fire grill. Hungry yet?

What to see in Calgary

Wonderland Sculpture — What could be more impressive than a 12 foot bent wire sculpture of a girls head? Created by sculptor Jaume Plensa, the concept is said to represent the hopes of young Albertans. Located outside the Bow Building.

Royal Tyrrell Museum — Alberta’s badlands are a well known resource for paleontology, which can be experienced first hand at the Royal Tyrrell. You can go back in time and get into the world of the dinosaurs from the Cretaceous period (among other timelines) and really get a sense of Albertosaurus sarcophagus, a relative of T-Rex, a predator and unique to the Red Deer River Valley area.

Prince’s Island Park – An urban park on an island in the middle of the Bow River is a perfect break for a busy sightseeing schedule!  With many events throughout the year being hosted there, it’s also a busy place but lovely walking paths, playgrounds and picnic areas make it serene nonetheless. Speaking of the Bow River, did you know that it is the third best trout fishing spot in the world (you can try your hand at it downriver at the Bow Habitat Station)

Calgary Tower – At 191 metres, it’s the tallest observation deck in Western Canada. If that isn’t reason enough to book a trip up the tower, then the view should be! A 360 degree view of downtown Calgary and beyond!

What to do in Calgary

Heritage Park — Explore Western Canada’s past at the largest living historical village in the country. Spanning the times from the 1860s through to the 1950s, visitors can see everything from a Hudson Bay Company trading post to the Gasoline Alley Museum, featuring a superb collection of antique vehicles.

Telus Spark —Interactive exhibits make this science and tech museum a worthwhile stop, particularly with active and engaged kids who like to press buttons. But who are we kidding: ALL kids like to press buttons, right? So this is the place for them to check out the some amazing science, get a view of the cosmos at the Dome Theatre (planetarium) and generally SPARK some imagination and learning in the best possible and most fun way!

Canada’s Sports Hall of Fame — For the sports nut in the family, this is a must do stop! With different galleries representing a range of sports, you can get the feel for what it’s like to be a world class ski jumper in the Glide Gallery, a high stakes hockey final in the Sport Check Hockey Gallery and so on! With Olympic and Paralympic collections, a media room and more, every sports fan will have a great time!

Head-Smashed-in-Buffalo-Jump — In the very spot where the Rockies meet the plains foothills, UNESCO has designated this place as a world heritage site, ranking alongside the pyramids of Egypt and the Galapagos Islands, in relative historical importance. A buffalo jump was used nearly 6,000 years ago by Plains Tribes to hunt bison. It’s a fascinating look into the area’s indigenous past.

Banff National Park  / Banff / Lake Louise — The oldest national park in Canada, established in 1885, is a national gem. Really, you can’t appreciate these beautiful mountains, forests and crystal blue waters in a single day, but the area is definitely worth a side trip!

Have you ever been to Calgary? If so, what spots do you recommend?