Factoid: after water, tea is the most frequently consumed beverage in the world, to the tune of 3 billion cups per day. The most prolific sippers? The Irish, followed closely by the British.

While my very English aunt will tell you that tea wasn’t tea until the British came along, she is so wrong. Eastern nations including Russia, China and the Middle East have been drinking tea for upwards of 5,000 years. The English? Not more than 400. Sorry Auntie!

Historically, tea was, like many other commodities, a currency in and of itself. In fact, tea was used AS currency in Siberia, as recently as the early 1800s. Fascinating, right? 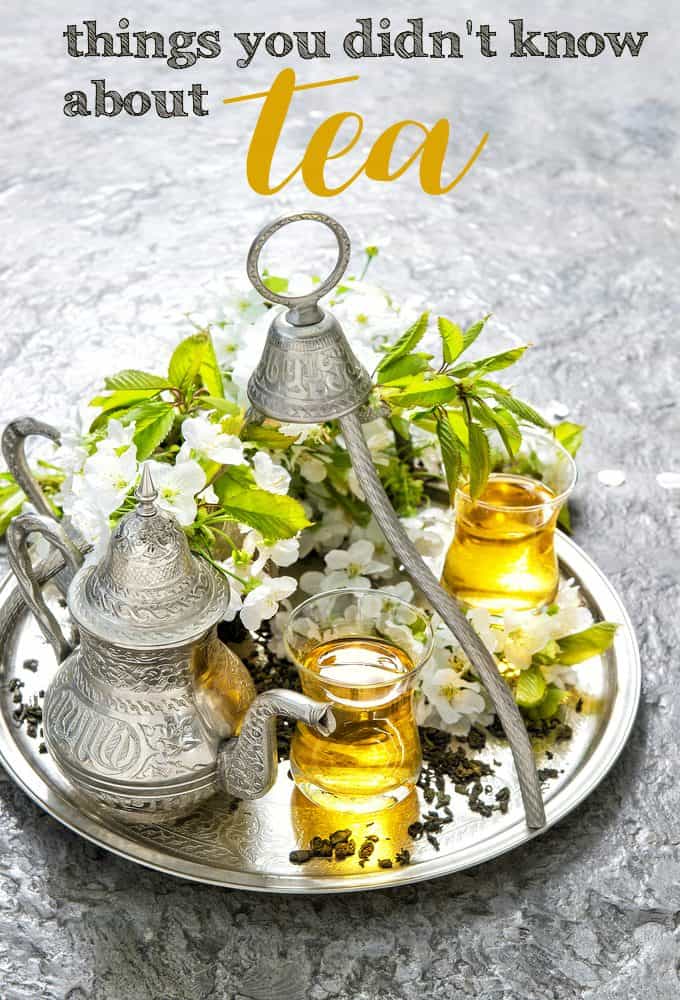 Factoid: The ‘tea bag’ as we know it was invented in the USA, much the chagrin of authentic tea drinkers worldwide. The invention was purely accidental: “In around 1908, Thomas Sullivan, a New York tea merchant, started to send samples of tea to his customers in small silken bags. Some assumed that these were supposed to be used in the same way as the metal infusers, by putting the entire bag into the pot, rather than emptying out the contents.” (Source). Mr. Sullivan went on to manufacture the ‘gauze’ tea bag, which is much the same today as it was in 1920, complete with string and tag on the end.

Although there are different types of tea including black tea, white tea, oolong and green tea, to name but a few, they ALL come from the same plant: camellia sinensis. The distinctions in flavour between the different types are created in the processing, amongst other things. And your favourite herbal tea is not, I’m sorry to tell you, tea at all, but rather a selection of herbs and flowers.

Tea contains a fair shot of caffeine, if that’s what you’re after in the morning. It has antioxidant properties as well as containing vitamins B1, B2, and B6, potassium, manganese, folic acid and calcium. Of all the teas, black tea has the strongest caffeine content: 48 mg per 8 oz cup! Compare this to the average cup of coffee, which contains about 94 mg per cup. (80 mg if you are drinking coffee from your local large chain that also sells those round fried pastries… I’m not naming names, but…)

Brewing a good cup of tea

Loose tea makes the ideal cuppa―stored in an airtight container, in a cool, dark place. You can use individual strainers or a French press for a perfectly brewed cup. The idea is that the leaves are whole, not crushed as they are in the bags, rendering a fuller and more complete flavour. That said, almost 97% of tea drunk today is via the little white baggies, so convenience trumps taste!

The darker the tea, the hotter the water should be: 62 degrees for white or green teas; 100 degrees (boiling point) for black teas. Steeping time is up to the individual drinker but an average is about three minutes.

When to drink tea

The first time I encountered the term ‘elevenses’, it was while reading the Hobbit. A quick post-breakfast, pre-luncheon cup of tea and a nibble. How very civilized! For the Irish and English, tea drinking only ends in the evening, to be most often replaced by the other favoured brew: beer.

If you want to have tea, say around 4 p.m., with light snacks and cakes, you are having ‘afternoon tea’. A silver tea service is not required, but this famous little break is often and improperly confused with ‘high tea’, which is an actual meal served with a pot of strong, fortifying tea. The former was derived by the upper classes and specifically by the Duchess of Bedford, who could not abide the long stretch between lunch and dinner (commonly served around 8 p.m. in England). High tea was the purview of the working class, who couldn’t take a break for dainties at 4 p.m. and therefore needed to go directly to their full meal, after work.

The champagne of teas

Tea grown in the Darjeeling region of India is considered to be the ‘champagne’ of teas. 10 million kgs of the tea are grown annually but 40 million kgs are sold, worldwide. So like the Champagne region of France that seeks to crack down on less reputable ‘copies’ of their delectable nectar, Darjeeling is trying to find the sources of mislabeled blended teas that just aren’t quite up to standard.

Other uses for your tea leaves

You can do as Professor Trelawney does in Harry Potter and read the leaves. Just stir what remains in the bottom of your cup three times. All joking aside, tea leaf reading is considered to be a respected art in parts of Asia. For the rest of us who don’t have the gift of ‘sight’, a far more efficient use of the remains in your press would be to leverage the anti-inflammatory properties they contain on bug bites or puffy eyes (THIS would help with sight!) and fertilize your plants, particularly the rose bushes, with them.

Factoid: Seven multinational corporations are responsible for 90% of the tea market and three quarters of the world’s tea is produced in just five countries: China, India, Kenya, Sri Lanka and Vietnam. (Source)

Before you go, check out these 8 tea subscription boxes for Canadians.

Do you feel like you know more about tea than you ever thought possible? I’ll bet someone has a tidbit to share! Let me know if you have an interesting tea fact or a favourite tea based recipe!