Things You Didn’t Know About Coffee

1.6 billion cups of what I call ‘the nectar of my life” are drunk every single day, around the world. But where did it all begin? 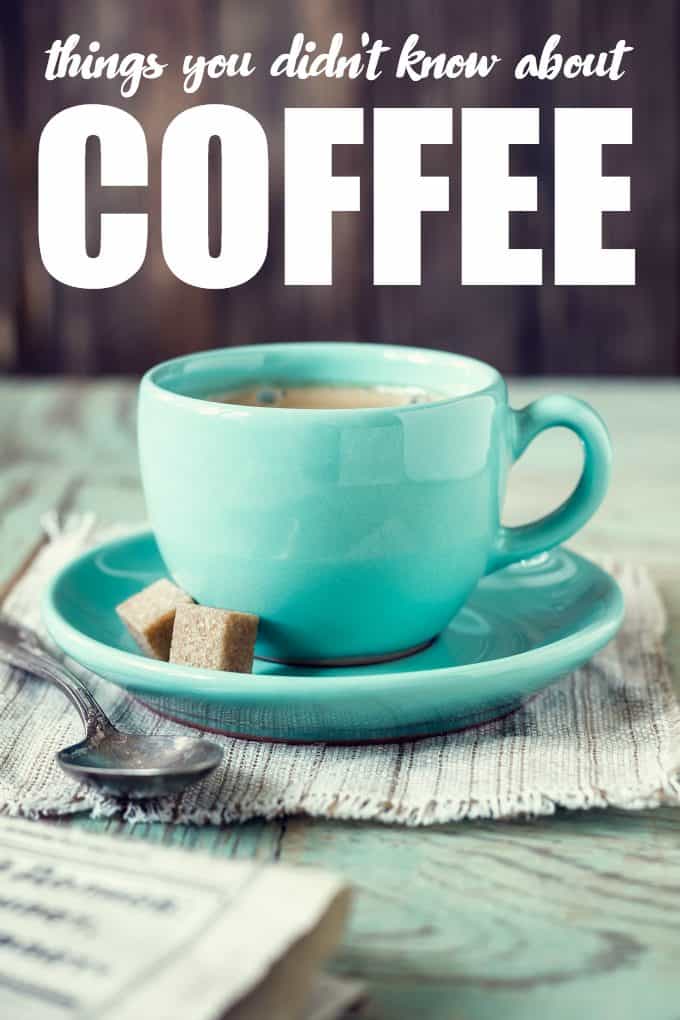 Where did coffee start as something that people consumed?

“Around A.D. 1000, Arab traders brought coffee beans home from Africa and started boiling them into a drink they called qahwa. Translation: “that which prevents sleep.” (source)”

Another source said that long before the traders arrived on scene, Ethiopian goat herders noticed that their charges were a little wired and took up dancing the cha-cha after consuming coffee cherries—the fruit that contains coffee beans. Various tribes throughout Africa took that idea to heart and the first version of consumable coffee was as something that was eaten, rather than drunk.

Did you know? Coffee is the second most traded commodity on global markets, after oil.

The good and the bad about coffee

Coffee is a major source of antioxidants and studies of moderate consumption (3-4 cups / day) have shown reductions in things like colon cancer, liver disease, type 2 diabetes, and reduced risk for multiple sclerosis. That’s the good.

The bad? Coffee can, in fact, kill you. Of course, you’d have to drink 80-100 cups of it in short order for that to happen, so don’t try that at home. That said, new powdered caffeine supplements and caffeine infused drinks can lead to issues like insomnia, irritability, rapid heart rate, among other things.

On a positive note, there is such a thing as a coffee nap. Best of both worlds, right? The idea is that you drink a cup of coffee RIGHT before taking a 15-20 minute nap. The result? You feel rested AND alert at the end of it. (Source)

We know that the morning cup gives us the jolt we need, but how? Without getting overly technical (you can read the scientific explanation here), caffeine causes your pituitary gland to cause your adrenal glands to produce adrenalin, or what is known as the ‘fight or flight’ hormone. The adrenalin gives you the energy boost and sharpens your attention that you are looking for. Another way to create more adrenalin to be released in your body is to experience high stress or a dangerous situation. I’d rather drink a cup of coffee or two, wouldn’t you?

We all know that caffeine can interfere with our internal body clocks and sleep patterns so it’s best to avoid drinking coffee at least six hours before bedtime. Thinking of switching to decaf? It still has caffeine, though you need to drink five to ten times as much decaf to get the total caffeine content in one or two regular cups.

Are you ever confused when ordering coffee?

It’s true that there are a lot of varieties of coffee drinks—and I don’t mean the concoctions to be found at your local donut emporium.

Here’s the low down, so you can look like a coffee pro the next time you wander into a cafe:

Have you ever said that you love coffee so much, you would bathe in it? No? Well, in case you have ever had that notion, it turns out that there is somewhere you can go to make that happen: The Yunessun Spa in Hakone, Japan. Among their more interesting spa treatments, including bathing in wine, chocolate or sake, you can also have coffee poured all over you and then swim in a bath of ramen noodles (you can’t make this stuff up!)

And for something to file under the category of ‘ew’: “Coffee cherries—the fruit that bears our beloved beans—are a favorite snack of elephants, and the beans, or seeds, can be harvested, already hulled, from their dung. Smooth and caramel-tasting, elephant-dung coffee has been known to sell for $500 a pound. (source)” I think I’ll pass on that one.

However you take your coffee, there’s no doubt that it is, for many of us, the elixir of staying awake and functioning. Do you have a weird or interesting fact about coffee that you’d care to share?