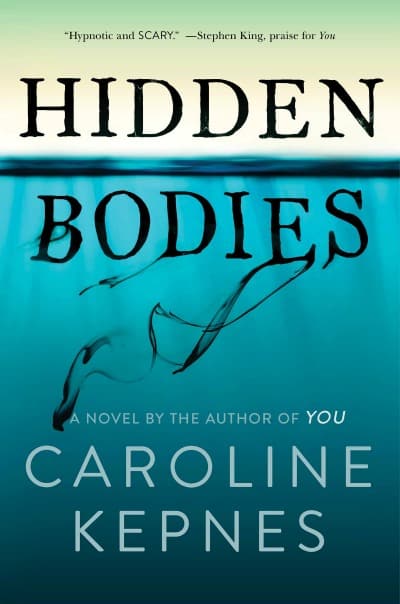 Disclosure: I received a copy of the book from the publisher. All opinions are my own. This post contains affiliate links.

In the compulsively readable follow-up to her widely acclaimed debut novel, You, Caroline Kepnes weaves a tale that Booklist calls “the love child of Holden Caulfield and Patrick Bateman.”

Hidden Bodies marks the return of a voice that Stephen King described as original and hypnotic, and through the divisive and charmingly sociopathic character of Joe Goldberg, Kepnes satirizes and dissects our culture, blending suspense with scathing wit.

Joe Goldberg is no stranger to hiding bodies. In the past ten years, this thirty-something has buried four of them, collateral damage in his quest for love. Now he’s heading west to Los Angeles, the city of second chances, determined to put his past behind him.

In Hollywood, Joe blends in effortlessly with the other young upstarts. He eats guac, works in a bookstore, and flirts with a journalist neighbor. But while others seem fixated on their own reflections, Joe can’t stop looking over his shoulder. The problem with hidden bodies is that they don’t always stay that way. They re-emerge, like dark thoughts, multiplying and threatening to destroy what Joe wants most: truelove. And when he finds it in a darkened room in Soho House, he’s more desperate than ever to keep his secrets buried. He doesn’t want to hurt his new girlfriend—he wants to be with her forever. But if she ever finds out what he’s done, he may not have a choice…

Joe Goldberg is almost the perfect guy. He’s good looking, sexy and charismatic. He seems like a genuine guy that you could be friends with. He has one serious flaw though. He’s a murderer. I’d even say he’s a serial killer – if you get in his way or make him mad, he will kill you.

I first met Joe in the novel, You. I loved it so much that I included it on my Top 20 Best Books of All-Time list. You was written in a second person narrative while Hidden Bodies is in the first person told from Joe’s point of view. Both novels capture an intimate look into Joe’s disturbing mind. The end result is fascinating. Just like You, I could not put Hidden Bodies down.

Joe moves to Los Angeles on a mission: to even the score with a past girlfriend who betrayed him. With Joe, we know that means he intends to kill her. Hidden Bodies is the exciting twists and turns of Joe’s experience in his new home. We follow him on his latest obsessions and watch him take out any person who dares to cross him.

Joe is terrified of anyone finding out who he really is. I was on the edge of my seat waiting for people to find out his past. The bodies are piling up so I figured it was bound to happen. I had to keep reading to find out.

Expect lots of pop culture references like in You. I found there to be even more in Hidden Bodies given the entertainment setting!

Carolyn Kepnes does a wonderful job of creating interesting and diverse characters that you can easily picture in your mind. She even has a knack for making a sociopath like Joe someone you root for. How nuts is that?! I would say that takes talent to make a serial killer seem like a nice guy and one you don’t want to see caught.

My recommendation is to read You first versus starting with Hidden Bodies. There are quite a few references throughout the book to the past events and you’ll be able to see the entire picture of what went down before. Both books are juicy reads and I hope Carolyn Kepnes writes more of them!

Check out my review of You by Carolyn Kepnes. Buy Hidden Bodies on Amazon.com or Amazon.ca.