It’s time to start the countdown! The countdown to the 2016 Summer Olympics that is. The Rio 2016  Olympic Games are just over a year away.

Canada’s Olympic team has been training hard and setting goals. We love to sit down together as a family and watch the Olympics on TV. That’s one time I don’t mind people yelling and screaming in the house. It can be intense!

Do you know any athletes that competed in the Olympics in recent years? My cousin was on the Canadian women’s hockey this team in the recent Winter Olympics. We were very excited and proud!

Why not get the whole family involved in the countdown to the Rio 2016 Games? I’ve got a couple ideas for fun ways to get everyone excited about the Olympics.

1. Play an Olympic sport you’ve never tried before with your family. Water Polo looks like fun and I’ve already mastered the Egg-beater.

2. Research the Canadian athletes who are participating in the Olympics. Find out who they are and what they are planning for 2016. Then when the games begin you can follow their journey.

3. Set up mini Olympics in your backyard with your homemade equipment. Be creative! 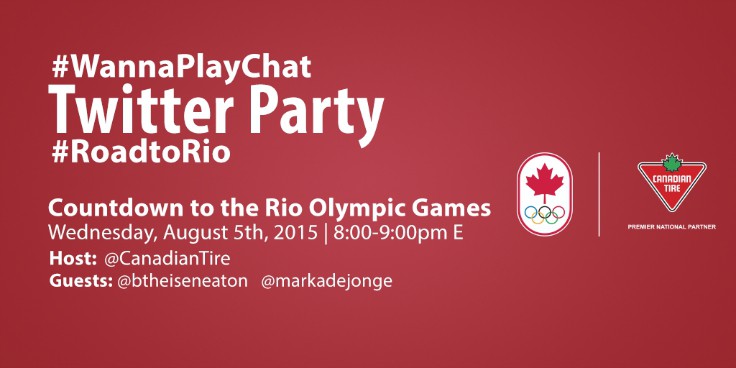 August 5, 2015 marks the start of the one year countdown to the 2016 Rio Summer Olympics. And yes, we are celebrating with a Twitter Party!

Canadian Tire is a proud sponsor of the Canadian Olympic Committee (COC) and will be hosting the party to start the countdown.

Wait, it gets better. Canadian Tire also has athlete relationships with several Canadian Summer Athletes and they’ll BE ATTENDING THE PARTY TOO!  Can you tell I’m looking forward to it?!

Here’s a bit more about the Athlete guests attending:

No RSVP required! I hope you can join us on Wednesday. Tweet with you then!