Refrigerator organization is one of those things that I love seeing, I love experiencing, but when it comes down to it, it never happens. I think that’s because, after you’ve spent two hours preparing a list, grocery shopping, and unloading said groceries, you really don’t care where they go at the moment – you just want them put away. Then, a few hours later, reality sets in because you’re trying to cook dinner and you can’t find the groceries you just bought! 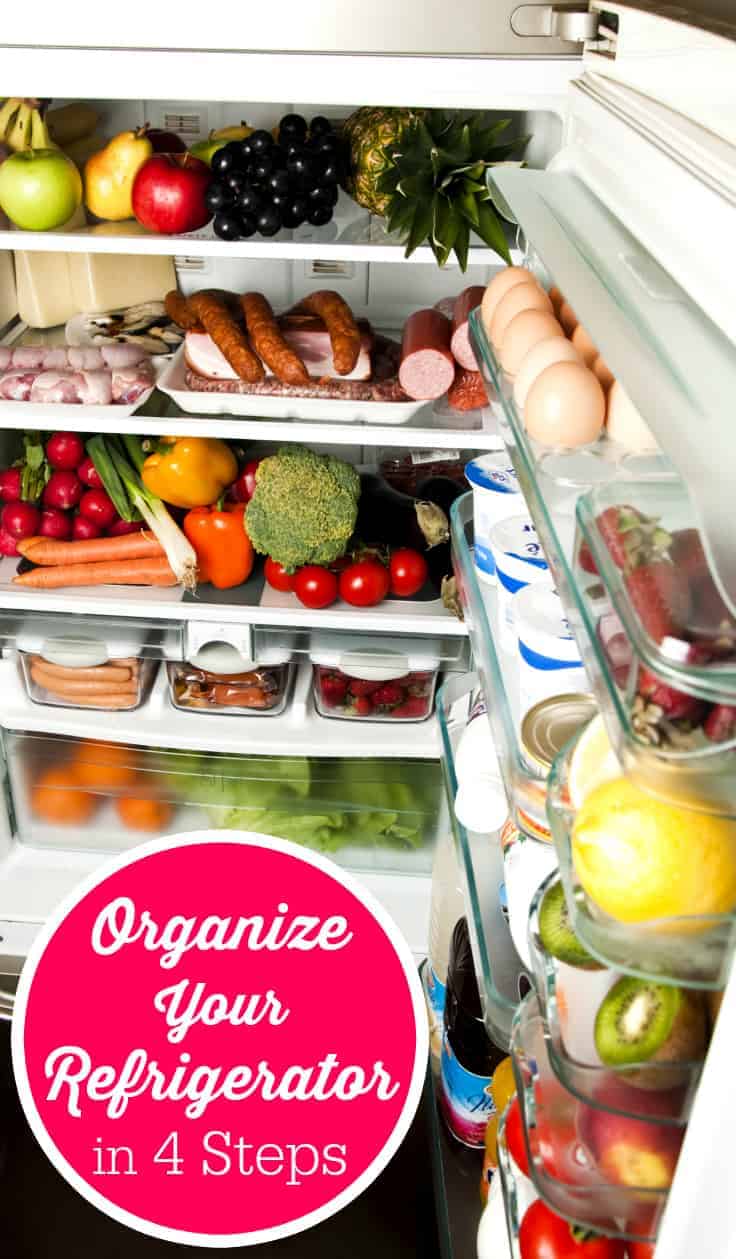 Let’s tackle our crazy refrigerators – together. Organize your refrigerator in these four simple steps.

1. Clean it out – You knew this one was coming. Take some time to empty everything out of your refrigerator. If it’s out of sight, it’s out of mind, so it’s best to take it all out and set it on the counter, table, whatever, while you organize.

After everything is out of the refrigerator, wipe down the shelves and drawers – or scrub them, if they haven’t been cleaned in a while.

Get rid of anything that is expired, and move anything that is closed to its expiration date up front so you know to use it right away. If you have old ketchup packets from fast food joints, ditch them. If you have several of one item, combine them into one container or move them up front so you know to use them all and not buy another until they’re almost gone!

2. Get a handle on drinks by using tall, thin containers rather than big bulky gallon jugs that juices and milks tend to come in. This utilizes vertical space, and frees up some shelf space. Milk should be store on the bottom shelf in the back, because that should be the coldest place in your refrigerator. Other drinks can be stored either in the door or on the top shelf.

3. A place for everything, and everything in its place. Eggs stay in the middle of the fridge, because that’s the place with the most stable temperature.

Veggies go in the drawer at the bottom, and fruits go in the crisper. Lettuce has a habit of going bad, fast, so consider a lettuce saver if you go through a lot of it.

Deli meat goes in the deli drawer, and other meat goes on the bottom in case it drips. You don’t want the rest of your food being contaminated!

4. Label everything, with dates and ingredients. So if you have leftovers, put them in an airtight container and then stick a label on it, listing what it is and when it was cooked – so you know to throw it out if it’s not eaten a few days later.

Once the entire process is complete, it’s time to do the same thing to the freezer! I’ll save that for another post 🙂

When was the last time you organized your refrigerator?