Hi Everyone! It’s Nicky, calling in again from Kitchen Sanctuary.

Today I’m bringing you a recipe born from indecision, a leftover tube of crescent roll dough and a serious craving for something sweet. You may remember from those Snicker Brownies I made a couple of months ago, that I like to go a little over the top when it comes to dessert.

If you’re going to have a dessert, you might as well really enjoy it right? 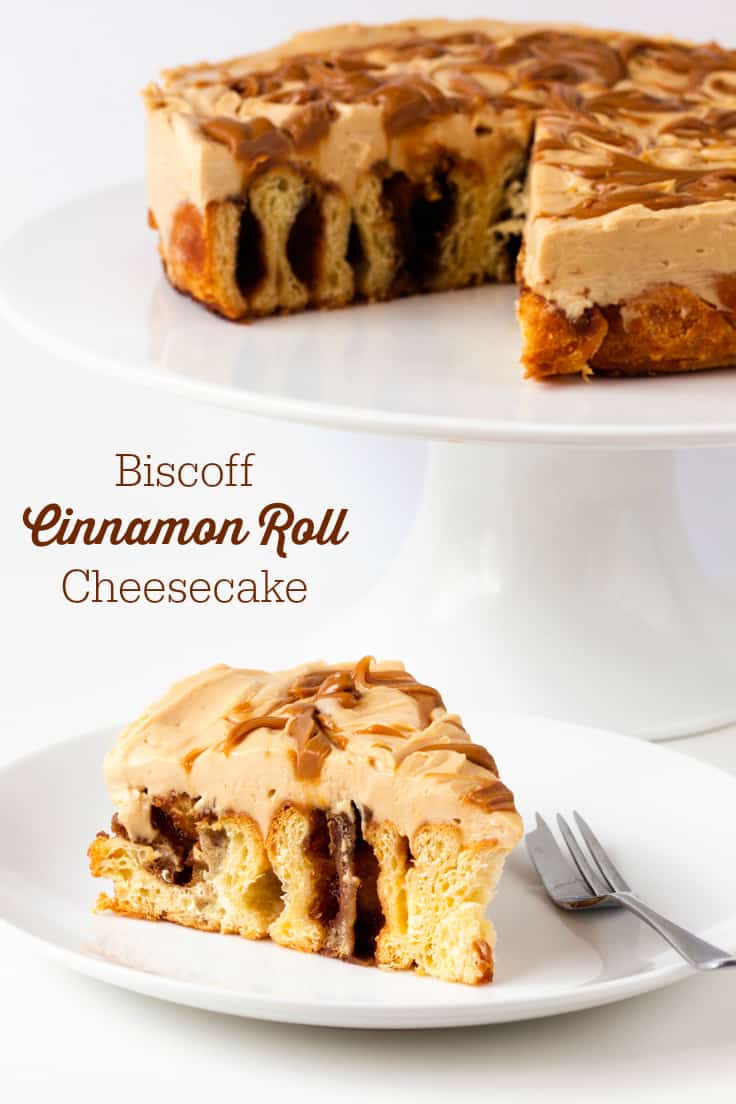 So, staring into my cupboards for inspiration, my eyes fell on a jar of Biscoff spread.  Have you tried it? It’s basically biscuity heaven in a jar (that you want to sandwich between two biscuits before eating – or maybe that’s just me).

I decided it would be a perfect addition to some quick cinnamon rolls.

Whilst the cinnamon rolls were in the oven, I set work thinking about the glaze.

Initially, it was just going to be a standard cinnamon roll cream-cheese glaze. But such was my sweet tooth, that I decided it’d be much more fun to turn it into a cheesecake.  Let’s pile that cheesecake topping on, and hey, whilst we’re there, why not swirl in some more of Biscoff! 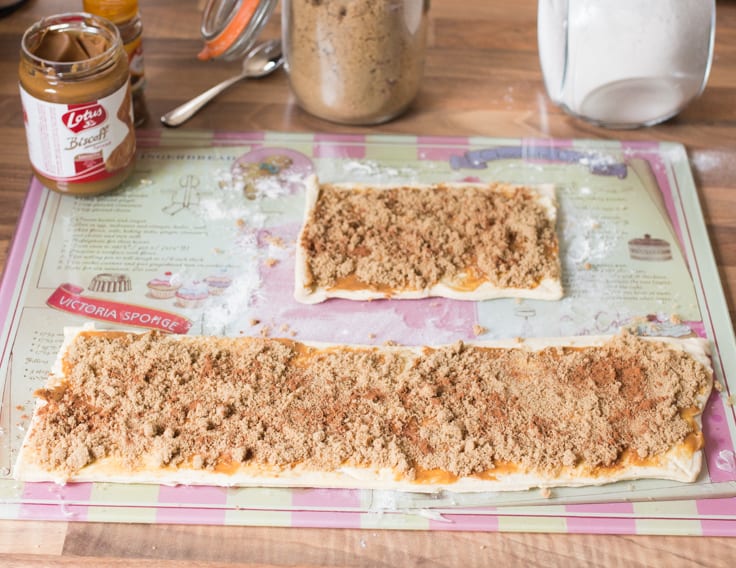 If you have had Biscoff cookies, it is like that but in a more creamy consistency. Very similar to the texture of peanut butter but the flavor is of a cookie that is light, refreshing and irresistible. 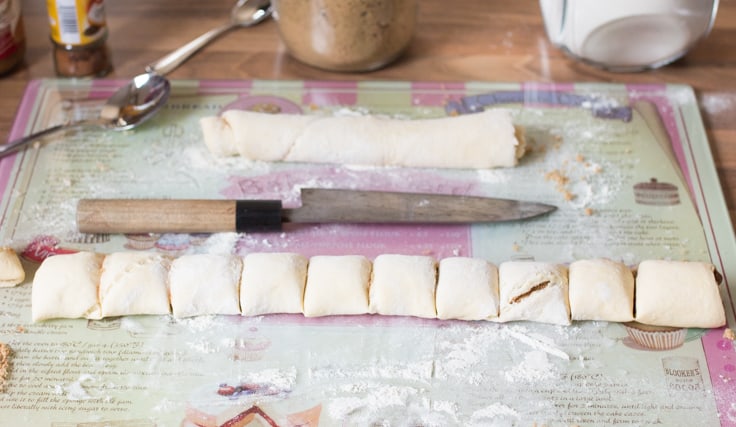 For the cinnamon rolls, I used canned crescent rolls and then dressed them up with a cinnamon sugar filling, and of course Biscoff. Talk about easy cinnamon rolls that offer that delicate and light texture base.

Now, if you have a tried and true cinnamon roll recipe you can’t dare to not use, go for it. I wanted to simplify and eliminate some steps in the recipe, so I reached for canned crescents to speed up the process. No mixing dough, letting it rise, and so on. 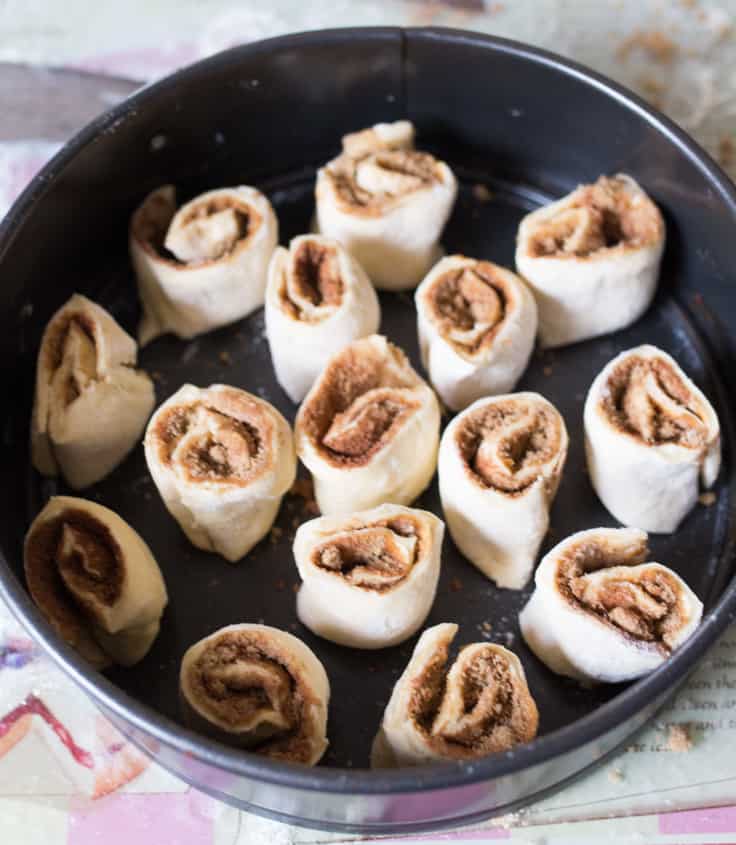 Is This a No Bake Cheesecake Base for Biscoff Cheesecake

Yes. This is a no-bake cheesecake recipe. I did this because it works well together. I find that no-bake cheesecake offers a fluffy texture, and it pairs really nice with the cinnamon roll base. You just have to allow the cheesecake to store in the fridge for a minimum of an hour, to help it set up. 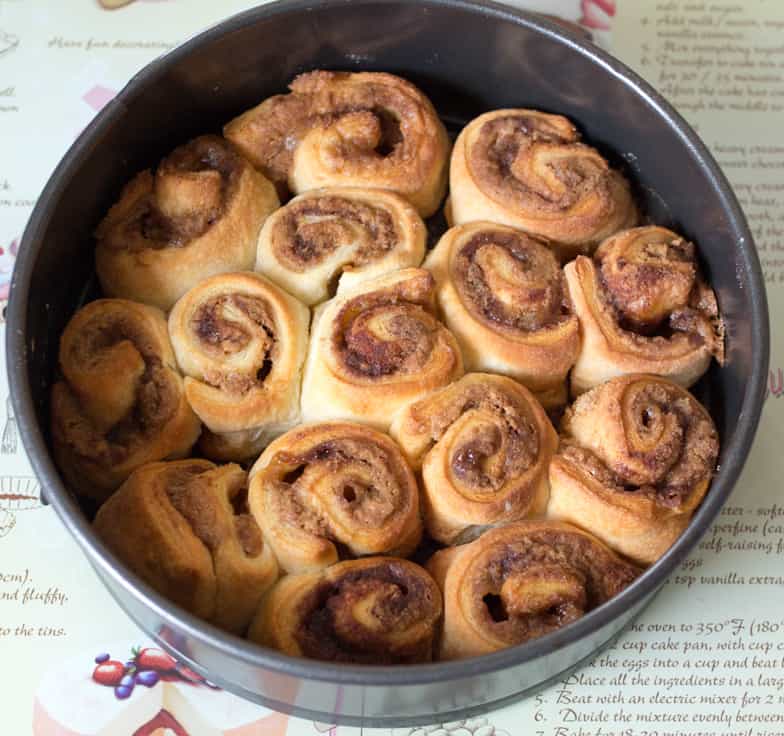 Does Biscoff Cinnamon Roll Cheesecake Need to be Refrigerated

Yes. Because of the cream cheese in the cheesecake base, this recipe does indeed need to be refrigerated. Never leave this cheesecake out on the counter for more than two hours at a time or you run the risk of it beginning to grow bacteria and going bad a lot faster. 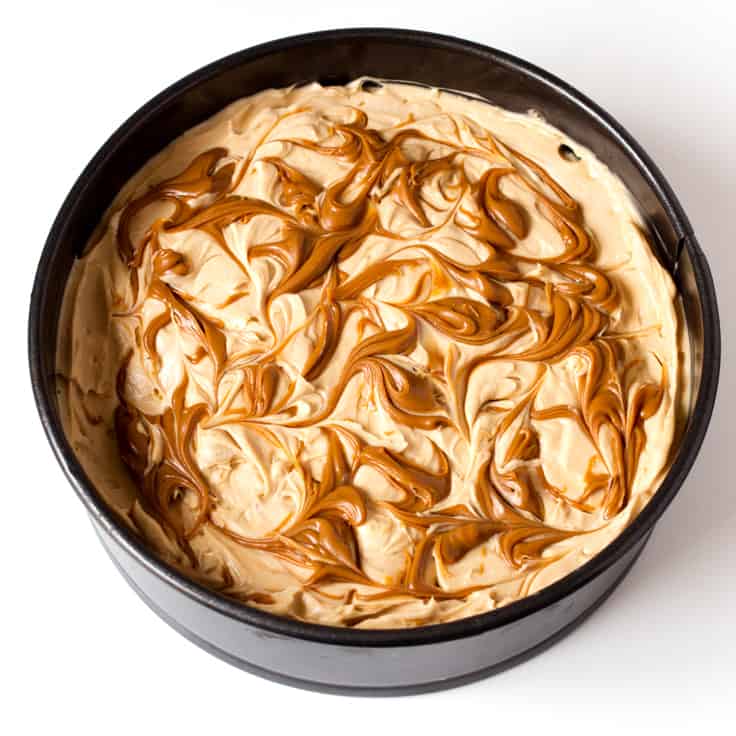 How Long Will Cinnamon Roll Cheesecake Store in Fridge

Around 3-4 days is what you can expect from this cheesecake. I will say that the best time to eat is day one or two. After that, the cinnamon rolls can begin to dry out a little.

Start by grabbing your crescent rolls and rolling them out for a flat surface. Then work on adding the filling in so that you can roll them up and slice them for making mini cinnamon rolls. Once that is done, bake until done and set to cool. Then take room temperature cream cheese and begin working on your cheesecake layer.

I share all the detailed instructions below for you to follow. Then after you fully make your cheesecake it needs to store in the fridge for a few hours to help it set up. Once it is ready, slice and enjoy! 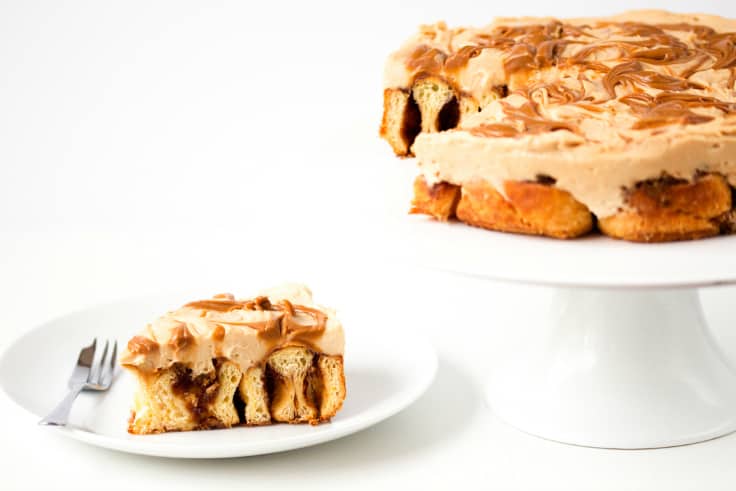 Start with a room temperature cream cheese. If you do not do this, your cheesecake will be clumpy and it won’t cream together like you want. So just set out your cream cheese around an hour or so before you plan to work on the cheesecake layer. 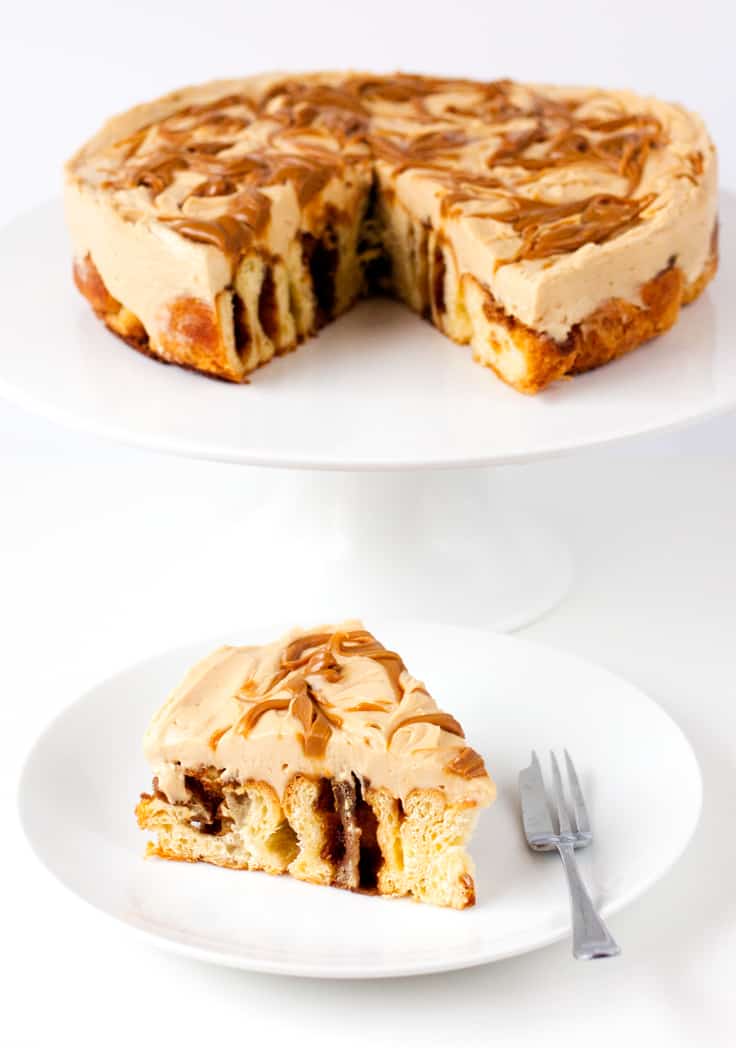 What If I Can’t Find Biscoff Spread

Biscoff spread can be purchased online. In the states it can something you don’t see in the store. If you want you can leave it out, or opt for even a swirl of cookie butter. It won’t taste the exact same, but it will be a tasty and fun twist to the cheesecake.

Give this recipe a try, and let me know what you think. We are loving the flavor and the cinnamon roll crust sets it apart from any other cheesecake we have had. 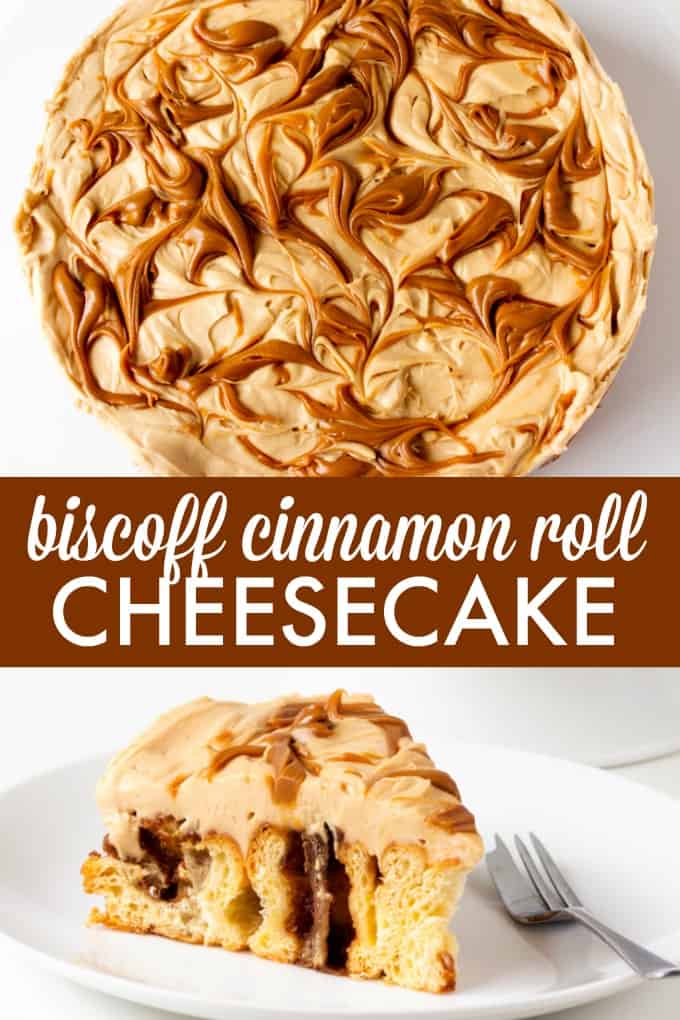 Nicky lives in Cheshire in the UK with her husband and two children. She blogs over at Kitchen Sanctuary where she creates family friendly recipes and mouth-watering photos. Connect with Nicky on Facebook, Instagram, Pinterest and Twitter. 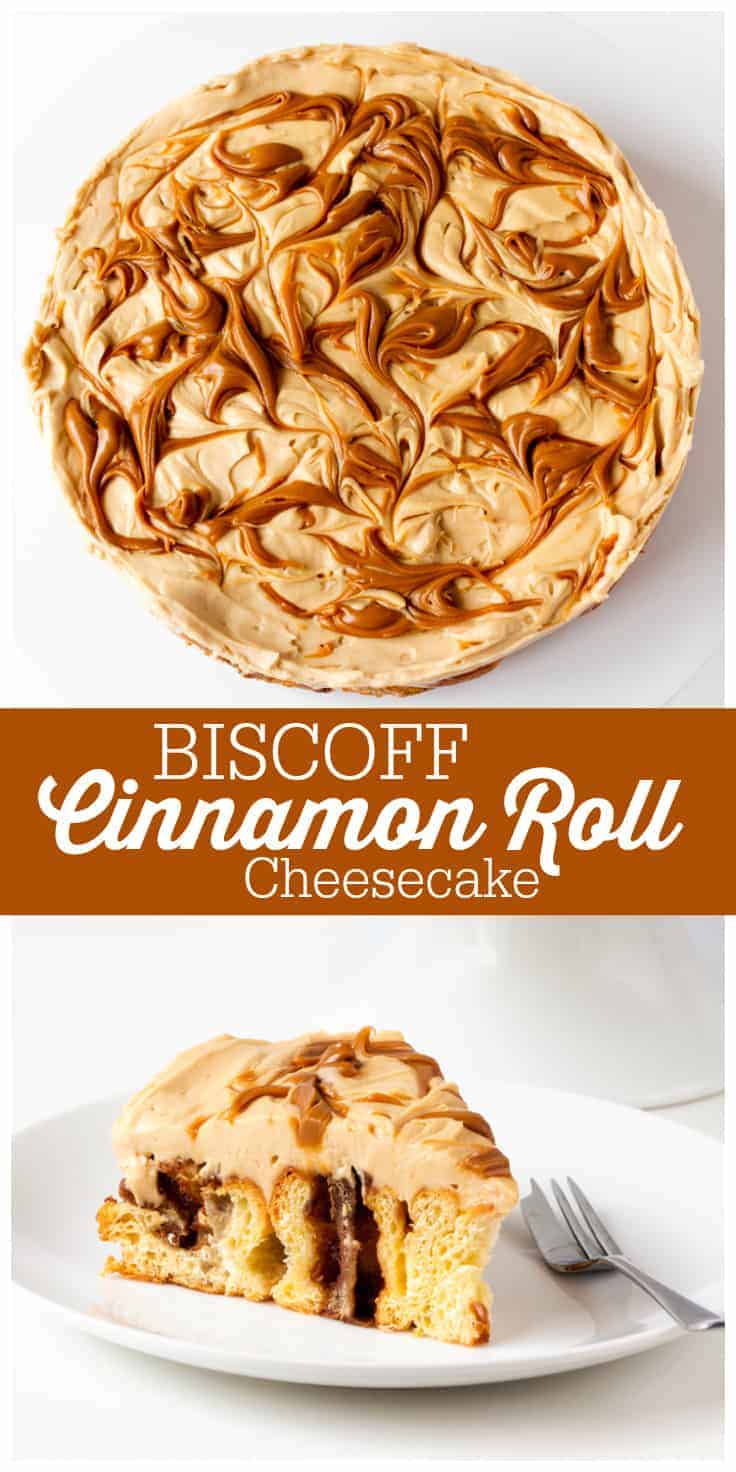 An over-the-top dessert made with fresh cinnamon rolls and cheesecake topping swirled with Biscoff spread! 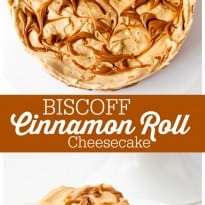