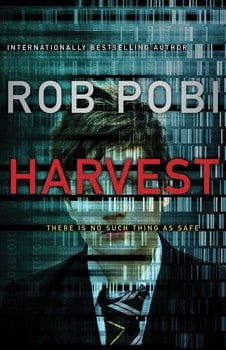 I received a copy of this book for review, but was not compensated financially in any way. The opinions expressed are my own and are based solely on my experiences while reading this book. This post contains affiliate links.

From the internationally bestselling author of Eye of the Storm comes a new novel introducing the fiery Alexandra “Hemi” Hemingway as she tracks down a serial killer cutting a swathe across New York City.

A stifling heat wave rolls into New York City, amplifying the already critical level of tension in the fragile concrete ecosystem. Recently recovered from a shoot-out that nearly killed her, homicide detective Alexandra “Hemi” Hemingway is already on edge. But then, on the morning Hemi discovers she is pregnant, a twisted serial killer makes his debut. And the heat goes up.

Soon, Hemi is besieged on all fronts as she struggles to catch up to a killer who always seems one step ahead. And as she pieces together the clues along the trail, it isn’t long before tensions boil over and Hemi finds herself a target in the deadly competition.

Not for the faint of heart, Harvest is a relentless ride that takes you through the fractured world of a nascent killer. And you will never feel safe again.

When they say this book isn’t for the faint of heart, they mean it! Harvest has some disturbing scenarios that made me cringe – something that is fairly hard to do!

The book is set in New York City under a blanket of deep humidity. Throughout the book, he describes how stifling and uncomfortable the characters are from the disgusting heat. I even cringed a little at that because I can’t stand being hot. Rob Pobi has a way with words that made me feel just how gross the characters felt from the heat wave.

We also meet the main character, Detective Alexandra Hemingway or Hemi for short. I immediately liked her and she was my favourite part of the book – even more so than the storyline! She’s tough and doesn’t take bull from anyone. She’s strong physically, mentally and emotionally and very smart. Hemi is the lead detective on the rash of recent murders in NYC. Someone out there is targeting children and going way beyond just murdering them. He is torturing them. It is truly horrendous.

Expect a few twists as the story develops. Things start to make sense somewhat behind “why” the murders are happening. Still though I wasn’t sure about “who” the killer was. This is one book that will leave you in suspense till the very end.

If you enjoy a thriller, you will probably enjoy this book. I hope that Rob Pobi continues on with more books featuring Hemi. I have a feeling he might and I would be definitely interested in reading them!