Just like there were lots of Elsa’s for Halloween, I’m also willing to bet that their will many Frozen themed presents under the tree this year! I have a 10 year old daughter who was asking for the movie and an Elsa doll. She gave Santa a few ideas on her letter to him earlier this month.

Disney’s Frozen Sing-Along Edition is now available on Digital HD for you to take anywhere when you sign up for Disney Movies Anywhere! Walmart’s VUDU service also recently joined Disney Movies Anywhere (DMA) as a participating retailer, further enhancing the ability to manage and enjoy your digital collections of Disney, Pixar, and Marvel movies at home and on the go.

There’s no need to wait for Christmas to come. You can get your Frozen fill now with DMA! 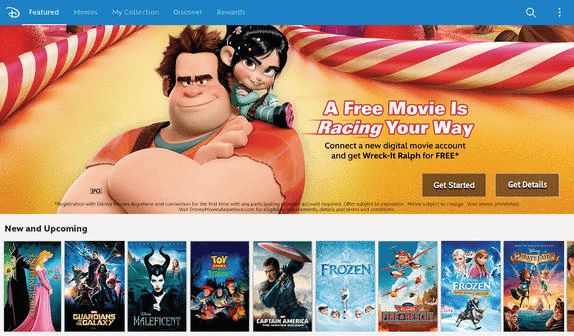 For a limited time, Disney Movies Anywhere users who connect a new participating retailer account will receive a free digital copy of Disney’s hit animated film “Wreck-It Ralph.” The launch of Disney Movies Anywhere on VUDU also coincides with the digital release of “Marvel’s Guardians of the Galaxy,” one of the year’s biggest hits, and Disney’s animated “Frozen Sing-Along Edition.”