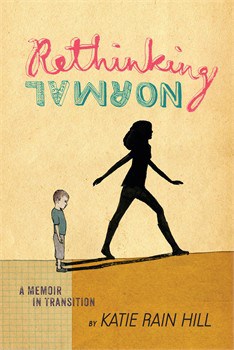 Have you ever worried that you’d never be able to live up to your parents’ expectations? Have you ever imagined that life would be better if you were just invisible? Have you ever thought you would do anything—anything—to make the teasing stop? Katie Hill had and it nearly tore her apart.

Katie never felt comfortable in her own skin. She realized very young that a serious mistake had been made; she was a girl who had been born in the body of a boy. Suffocating under her peers’ bullying and the mounting pressure to be “normal,” Katie tried to take her life at the age of eight years old. After several other failed attempts, she finally understood that “Katie”—the girl trapped within her—was determined to live.

In this first-person account, Katie reflects on her pain-filled childhood and the events leading up to the life-changing decision to undergo gender reassignment as a teenager. She reveals the unique challenges she faced while unlearning how to be a boy and shares what it was like to navigate the dating world and experience heartbreak for the first time in a body that matched her gender identity. Told in an unwaveringly honest voice, Rethinking Normal is a coming-of-age story about transcending physical appearances and redefining the parameters of “normalcy” to embody one’s true self.

Before reading the Katie Rain Hill’s memoir, Rethinking Normal, I had limited knowledge of transgenderism. I’ve never known anyone who is transgender and didn’t give it much thought. I found Katie’s book powerful and informative. It opened my eyes to transgenderism and what life is like for those who are transgender.

Katie was born as a boy named Luke, but knew early on that something was different. She had the body of a boy, but inside Katie knew she was a girl. Growing up she never was truly comfortable in her own skin.

In her junior year of high school, Katie returned after the summer break as a female. She endured bullying, taunts and even violence because she was different. I felt anger reading this because bullying for any reason is completely wrong. Katie is a strong person and I wondered if it were me going through what she was, would I have her strength? I’m not sure. However, I do believe we aren’t given more than we can handle. I think what she went through in her teen years shaped her into the strong and confident woman she is today.

When Katie did make friends, she was tormented with the decision to tell them that she was transgender. She was worried that they wouldn’t want to be her friends anymore. It was a heavy weight she carried on her shoulders and reading about her fear made my heart go out to her even more.

It made happy to see the strong bond Katie has with her mom. Her mom loves her unconditionally and though I’m sure it was a shock to her to learn that Katie wanted to live as a male, she did everything in her power to make Katie happy. Katie’s mom was a strong support to her during these challenging years. She made up for the strained relationship that Katie had with her father.

As the years went on, Katie became stronger and more confident. She became an advocate for transgender people and was featured in the media. She also underwent gender reassignment surgery. She explained how it was done and how the change made a huge positive impact to her life.

She also started dating a boy named, Arin, who was also a transgender teen. Their bond was powerful because they knew what it was like to live in a body you don’t belong. I was glad to see her happy and in a relationship.

I felt like I really got to know Katie by the end of the book. I hope people read it and learn about transgenderism and erase some of the stigma surrounding it.