I grew up watching hockey with my dad. He played for the local team and I remember spending many hours at the rink watching him play. He’s 60 years old now and he still plays hockey every week with the “Old Timer’s League”. Mind you he says that even the “Old Timer’s” are young guys in their late 30s and 40s. I think it’s great that my dad is still doing something he loves and is staying active.

I’ll have to tell my dad about the new CCM Resistance Helmet that recently hit store shelves. It features CCM’s proprietary Rotational Energy Dampening System (R.E.D) and was designed to help with better management of rotational acceleration caused by side impacts to the head that can happen during a hockey game.

Along with the liquid filled bladders of the R.E.D. System, the CCM Resistance Helmet also has Impact Pods in the liner construction. They combine EPP foam with a molded shock absorber to help reduce linear accelerations.

It also has a simple one-step adjustment mechanism at the back of the helmet so the player can quickly customize the helmet for a comfortable fit. 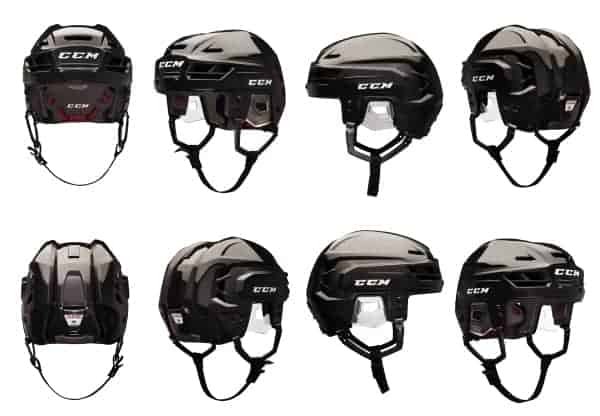 To my untrained eye, it looks like a normal helmet. It was, in fact, designed that way. It looks and feels like a normal helmet and players will play hockey as though nothing has changed. However, with this helmet, they will know that are wearing a helmet made with cutting edge technology and one that offers better protection.

The CCM Resistance Helmet was developed and tested over the course of four years with the Neurotrauma Impact Science Experts at the University of Ottawa. Impact testing was completed on head models to analyze the stress and strain impacts from hockey might cause to the brain. The tests include scenarios that can occur during a game like puck impact, drops and falls.

The CCM Resistance Helmet is different in that it offers protection against both linear and rotational accelerations. Right now current helmet certifications only focus on linear accelerations like if a person were to fall on the ice.

If you’re watching the 2014-2015 NHL season, you may notice a few of your favourite players sporting this helmet. They include John Tavares, Nathan MacKinnon, Patrice Bergeron, Dustin Brown and Alex Galchenyuk. The helmet is not only for NHL players though. Hockey players of all levels can wear one, including young kids.

Want a CCM Resistance for yourself or a hockey fan in your home? They are available now at all major hockey retailers worldwide!

My youngest daughter, Bridget, told us last week that she might be interested in trying out girl’s hockey this year. I may become a hockey mom after all! If she does decide to give hockey a try, I know just the helmet I want her wearing!

Do you know a hockey player who would like to try the CCM Resistance Helmet?