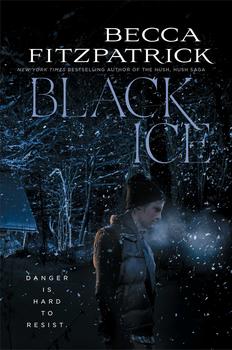 Danger is hard to resist in this sexy thriller from Becca Fitzpatrick, the New York Times bestselling author of the Hush, Hush saga.

Britt Pheiffer has trained to backpack the Teton Range, but she isn’t prepared when her ex-boyfriend, who still haunts her every thought, wants to join her. Before Britt can explore her feelings for Calvin, an unexpected blizzard forces her to seek shelter in a remote cabin, accepting the hospitality of its two very handsome occupants—but these men are fugitives, and they take her hostage.

Britt is forced to guide the men off the mountain, and knows she must stay alive long enough for Calvin to find her. The task is made even more complicated when Britt finds chilling evidence of a series of murders that have taken place there…and in uncovering this, she may become the killer’s next target.

But nothing is as it seems, and everyone is keeping secrets, including Mason, one of her kidnappers. His kindness is confusing Britt. Is he an enemy? Or an ally?

Black Ice is New York Times bestselling author Becca Fitzpatrick’s riveting romantic thriller set against the treacherous backdrop of the mountains of Wyoming. Falling in love should never be this dangerous…

I’ve read Becca Fitzpatrick’s Hush Hush saga and thought they were “ok”. I wondered if I would like a stand alone book like Black Ice better. And I did. Much much better!

Black Ice isn’t supernatural like the Hush Hush saga. I would describe it as a thriller with a bit of romance intertwined. It was one that left me on the edge of my seat throughout and I had to keep reading to know what would happen.

Britt is the main character in the book. She’s a teen who heads into the mountains with her rich best friend, Korbie, who owns a mountain getaway. Britt’s ex-boyfriend, Calvin, who is also Korbie’s brother, will also be there. However, on their way up the mountain, they become stranded in a mega snowstorm and can’t continue driving. They head out on foot to find shelter and discover a cabin with two young guys. And that’s where it all begins.

Britt and Korbie are taken hostage. They find out that Britt knows the mountains and can lead them out to the main road. They leave her friend behind and Britt and the two guys head out into the frozen wilderness.

The author portrayed the scenery perfectly. I felt like I was right there with Britt freezing in the cold and trying to survive. I wondered if she would survive the kidnapping and stay alive in those harsh elements.

Expect some mystery too. We learn that some girls have gone missing previously in the mountains and they never found who did it. I wondered if the kidnappers were the killers or was it someone else.

The only one drawback about a character is Korbie. I couldn’t stand her! She is self-centred and shallow. I knew girls like her in high school and I stayed far away from them. I kept wondering why Britt was still friends with her! Thankfully, she doesn’t have that big of a role in the book.

I wasn’t sure how I felt at first about the romantic aspect. However, as the story goes on, I understood how she felt and was rooting for them. There were some tender moments (nothing explicit though) and it just reminded me that things aren’t always what they appear to be.  That quote sums up the book perfectly.