Dialogues of a Crime 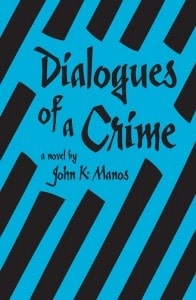 *I received a copy of this book for review, but was not compensated financially in any way. The opinions expressed are my own and are based solely on my experiences while reading this book. This post contains affiliate links*

Title: Dialogues of a Crime

1972. The Chicago Mob stands unchallenged, and college students with drugs provide fodder for political point-making. Michael Pollitz, a nineteen-year-old with connections to the Outfit, becomes one of those political pawns.

1994. Job-weary CPD Detective Larry Klinger becomes obsessed with a cold case from that pivotal moment twenty-two years ago. In the course of his investigation, he encounters questions of ethics, guilt, and justice that make him doubt certainties that have sustained him for decades.

Dialogues of a Crime examines guilt, innocence and the long-term ramifications of crime and punishment in a gray area where the personal lives of perpetrators, victims and law officers overlap.

The most intriguing thing about this book is how much it makes you think and reconsider things you may have always felt strongly about. Michael Pollitz grew up as the best friend of the son of a mob boss, Dominick Calabria. This is important and is the main reason Michael ends up convicted of a felony. I can understand why his father refused to accept Dom’s help as an outsider looking in and not fully understanding the nature of his sons relationship with Dom, but the decision to not accept his help starts a domino effect of bad luck for Michael.

Jump ahead to 1994 and all of the experiences of Michael’s past are behind him until a Detective shows up at his door asking questions from a time he’d rather forget. It’s intriguing and hard to put down. Michael is a puzzle to Detective Klinger which makes him a puzzle to the reader. He is one of the most interesting and hard to read characters I’ve ever had the privileged to read about.

There is a lot of dialogue, especially near the end, and Manos pulls it off brilliantly. It’s hard to keep a reader engaged with so much talking, but the conversations that Michael has with different characters are interesting. Each character has his own voice and a lot of them have accents which I could literally hear in my head while I read. They’re also important and move the story along. They aren’t just filler conversations which makes a big difference.

I found myself torn about how I wanted Dialogues of a Crime to end. The answer of whether or not justice is served is cloudy and I’ve never thought I would ever feel like there wasn’t a clear cut yes or no to justice. Thankfully I loved how it ended. I even forced myself awake after falling asleep just so I could finish the last few pages. I didn’t want to put it down.

Check out Dialogues of a Crime on Goodreads and see how the other bloggers liked the book!