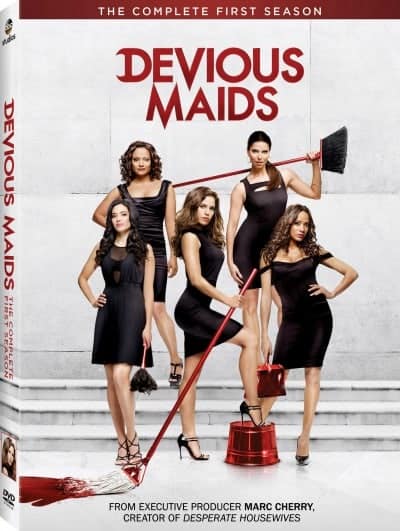 Disclosure: I was not compensated for this post. I received a sample for review purposes. Opinions expressed are my own.

Sex. Lies. Murder…It’s all in a day’s work. From Executive Producer Marc Cherry, creator of Desperate Housewives, comes Devious Maids: The Complete First Season. Meet five women bonded together by their jobs, their dreams and the dirt they sweep under the rug: Aspiring singer Carmen; Rosie, who longs to be reunited with the child she left back in Mexico; Marisol, whose outward identity masks a desperate hidden agenda; and Zoila and her daughter Valentina – both employed by the delightfully unhinged Genevieve Delatour (Susan Lucci).

Before the season is over, illicit affairs will be revealed and depraved secrets exposed, as we learn the sordid details behind a shocking murder. Start your collection with all 13 addictive episodes plus “sin-tillating” bonus features, and relive the intrigue as murder, mystery and mayhem collide amongst the mansions of Beverly Hills!

I’m a fan of the dark humour of Desperate Housewives and Devious Maids has that same type of comedy. John and I watched all thirteen episodes of this season in a just a few sittings. Warning though…it’s addicting!

The show is centred around the five maids and the families they work for. They work in Beverly Hills for the rich and famous, but their lives are so much more than just cleaning houses. The maids are privy to all the secrets and scandals of their employers and have their own scandals of their own.

Zoila and her daughter, Valentina work for Genevieve Delatour and her college age son, Remi. Zoila disapproves of her daughter’s growing relationship because she is the “hired help” and has an experience from her own past in a similar situation that has made her bitter and untrusting. Susan Lucci plays Genevieve and I think she steals the show. She is hilarious!

Carmen goes to work for Alejandro, a famous musician whom she greatly admires. She hope that he is her ticket to make it big into the music industry. Unfortunately she runs into a few snags dealing with the House Manager, Odessa, who forbids her from speaking to Alejandro.

Rosie works for a superstar couple who are having marital issues. Miss Peri is extremely self-absorbed and always has an agenda while Mr. Spence is kindhearted and soft and has feelings for Rosie. Rosie had to leave her son in Mexico to come to America to work and is desperately trying to get him to America.

Marisol is a maid on a mission. She is trying to prove her son’s innocence in a murder he was framed for. She goes undercover to dig up dirt on the maid who was murdered and trying to figure out who is the real killer to save her son.

Expect lots of scandals, secrets, laughs and unexpected twists. I love every second of Devious Maids and can’t wait for season two. It ended on a shocking cliffhanger (of course!) and I need to know what is going to happen.