Book Review | Bring on the Night 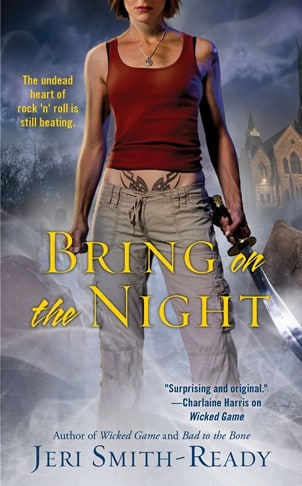 In Bring on the Night, the third book in the WVMP series by Jeri Smith-Ready, Shane and Ciara’s relationship status is put to the test like never before. Shane decides to propose to Ciara, who is still very new to steady and monogamous relationships. Even more challenging for the success of a long-term relationship is the fact that Shane is a vampire. He will never age, but eventually Ciara will be older than he looks—which is around twenty-seven or so—and Shane will have to watch her continue to age until she eventually dies.

Just as Ciara is about to finally obtain her college degree, a mutant virus on the campus starts claiming lives of people that Ciara cares about. Even Ciara herself is not immune to its effects; as a child, Ciara never contracted chicken pox, so the virus Ciara has caught is enough to finish her off. There are two choices: die by the virus or become a vampire like Shane. Life as Ciara knows it is about to end or begin, depending on how you choose to look at it.

I have to admit, I was pretty surprised when Shane proposed to Ciara. But I also keep forgetting that Jeri Smith-Ready’s vampires are so very different than the ones in other urban fantasy series that I’ve read. They feel more human; sure, they have strengths and abilities just like those other vampires, but for the most part they lead fairly normal lives.

The book isn’t just about the relationship between Shane and Ciara, however. Ciara has also enlisted in a paranormal military-like group, one that has an interest in keeping vampires in control. Ciara has been given her new assignment, one she must go along with in order to protect Shane. But there are also people within that agency that put their own interests first and cause more damage than they even realized they could.

Since Jeri Smith-Ready gets straight to the point in her books, I’d recommend reading them one right after the other. I’m one of those readers that cannot read books in a series one after the other; I always need a bit of a break. Unfortunately for me, I took about ten months before coming back to the series. Normally lack of summarizing previous books is something that I appreciate from an author, but I couldn’t help feeling a bit lost in this one. I definitely will not let myself fall so behind with the rest of the books in the series. Smith-Ready makes some very bold choices in Bring on the Night for her characters; at this point, I can’t even begin to predict how it will end.