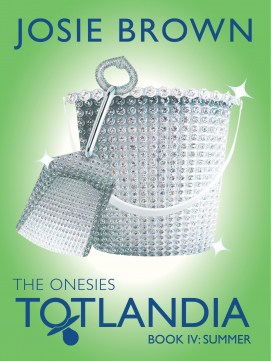 As summer sizzles in Totlandia, emotions boil over for the newest members of Pacific Heights Moms & Tots Club, whose trust in each other is sorely tempted by Bettina and her club politics.

When Jillian’s vindictive joke backfires, she learns the true meaning of forgiveness.

Jade’s betrayal puts her in a dangerous downward spiral with no bottom in sight—until she finds friendship and redemption where she least expects it.

Lorna faces the biggest trial in her marriage, and makes an important decision that may end it for good.

While Ally may regret the choices made she to get accepted in the club, her exile puts new opportunities in her path, thanks to Brady and his ceaseless desire to win her over—with Barry’s help, who is playing his own little game with the Top Moms Committee.

But it’s Bettina who suffers the ultimate punishment—one that changes her life, and the livelihood of the club, forever.

I was really excited to dive back into the world of the Pacific Heights Moms and Tots club. Book 3 was difficult to end on. I hated that Jade betrayed Ally like that and I was hoping for some reconciliation in Book 4.

Thankfully, the book didn’t disappoint. In Book 3 it had appeared for a short while there that Bettina might have been going soft, but she completely squashed that idea in Book 4. I didn’t think it was possible for her to be any more vicious than she already was, I guess I’m just too nice to think that way, but Bettina managed to one up herself. It made for some great conflicts throughout the book.

My favorite thing about these books is that they really capture the hurt you feel at betrayal and the complicated emotions that go with that. Including what could lead someone to betray a friend. In their own ways they all felt justified in their actions. A lot of that had to do with miscommunication and assumptions that were made, but in a weird way all of their actions made sense. Even if I didn’t agree with them.

I hated that the book ends here. Not that the ending wasn’t satisfying. I don’t want to give anything away, but I thought it was wrapped up very well. There are a few things left open and I know these books are The Onesies, so I can’t help but wonder if Ms. Brown is planning on focusing on the next year at PHM&T, but now they’re two. It’s set up in such a way that she could easily do that, but it wouldn’t be necessary. I would definitely love spending more time with Lorna, Ally, Jillian, and Jade though.