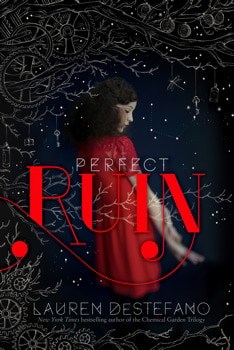 From the New York Times bestselling author of The Chemical Garden trilogy: On the floating city of Internment, you can be anything you dream. Unless you approach the edge.

Morgan Stockhour knows getting too close to the edge of Internment, the floating city in the clouds where she lives, can lead to madness. Even though her older brother, Lex, was a Jumper, Morgan vows never to end up like him. If she ever wonders about the ground, and why it is forbidden, she takes solace in her best friend, Pen, and in Basil, the boy she’s engaged to marry.

Then a murder, the first in a generation, rocks the city. With whispers swirling and fear on the wind, Morgan can no longer stop herself from investigating, especially once she meets Judas. Betrothed to the victim, he is the boy being blamed for the murder, but Morgan is convinced of his innocence. Secrets lay at the heart of Internment, but nothing can prepare Morgan for what she will find—or whom she will lose.

I was already a fan of Lauren DeStefano when I received a copy of her newest release, Perfect Ruin. With this book begins a brand new series, the Internment Chronicles. It’s a dystopian teen fiction which I’m a fan of already. If you enjoyed The Hunger Games or Divergent, you’ll probably enjoy reading Perfect Ruin too.

The main character is a teenage girl named, Morgan Stockhour. She lives in apartment with her mom and dad with her brother and his wife living in the apartment one floor above. The story is set on Internment, a big piece of land in the clouds. The people of Internment are forbidden by the king to even talk about the ground (aka. Earth where we all live). If you do talk about the ground, you are deemed an irrational and your life is ruined. People on Internment have been tempted to see what’s over the edge and some even jumped. They are called Jumpers and something bad always happens to them when they attempt to leave. Morgan’s brother, Lex is a Jumper and he was left blind after his failed attempt to leave.

A young girl the same age as Morgan is brutally murdered and that sets Internment on edge. Patrols are increased and people are scared. More things begin to occur like a fire and Morgan wonders what is happening to her city.

I noticed the story built up slowly which allowed me to really get a feel for the characters. The action picked up drastically towards the latter half of the book. It got to the point where I couldn’t put it down because I needed to know what was going to happen next.

I loved watching the relationship between Morgan and her betrothed, Basil, develop. At first they were a bit shy with one another, but their fondness grew quickly. They had genuine feelings for each other which is good since people on Internment only get one shot at love.  There was one point in the book where I wondered if Morgan was going to develop another love interest. However, it didn’t happen and I was glad because I think her and Basil are perfect together.

The book ended on a cliffhanger and I need to know what is going to happen!!! It’s going to be hard to wait to read book #2.