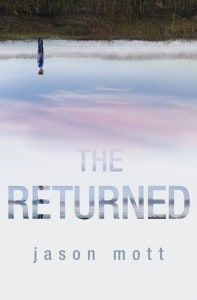 I know this book is going to get a wide array of reviews. Some people will love it, others will hate it. And that might seem unfair to say, but once you read it you’ll understand why I say that. I personally loved it. It wasn’t what I expected, which is why I think there will be a lot of people out there who feel dissatisfied and disappointed, but for me it was even better than I anticipated.

I expected it to focus more on the science fiction behind the phenomena of the dead returning. Of answering the question of who exactly these returned were and how they had come to be. But that doesn’t happen. Normally I’d hate to say that, but if that is your only draw to this book, your curiosity about what would cause such a thing, then I wouldn’t want you to feel your time was wasted. Those questions are never answered. And for some people that would drive them crazy. Something like that would usually drive me crazy. But the underlying message, the thought provoking experiences and the beautiful writing made it okay for me to not know.

There is an author’s note at the very end that explains where Mott came up with the idea for the returned and what the journey of writing it was for him and what he hopes it will accomplish for those who read it. If you read the book and are left feeling unsatisfied, I would encourage you to read the author’s note and hopefully some of that dissatisfaction will go away.

There is definitely a psychological journey that you go on and I’m sure those who have lost a loved one recently will have their heart strings pulled a bit more than those who have never lost someone close to them. I kept thinking about a friend of mine who lost a husband a few years ago and has since been remarried. What would it be like for her to have her first husband show up at the door after she’s finally managed to move on? These are the types of things this book goes into. As a psychology major, I thoroughly enjoyed it and felt that Mott did a fantastic job of capturing the emotions that everyone could potentially feel when faced with a lost loved one, or the lack of one. Fred Green, for example, is a character filled with a deep sadness when his wife isn’t one of the returned, only he doesn’t realize he’s hoping that she’ll come. Instead, he focuses his feelings on hating those who do return. I hated to hate him because I felt I understood where he was coming from, but he was doing horrible things and I just wanted to hit him on the back of the head for his stupidity. Any book that makes me feel that engaged with the characters is one I will highly recommend. And if you’re like me, you won’t be disappointed.

The Returned has been optioned by Brad Pitt’s production company, Plan B, and will air on ABC this fall under the title “Resurrection”.