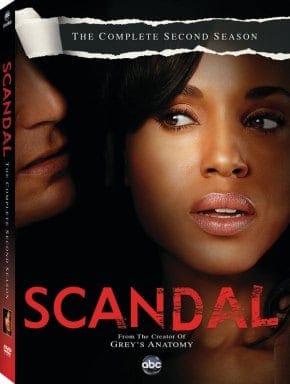 Experience every breathless, jaw-dropping moment as Olivia Pope and her team of “gladiators in suits” turn up the heat and raise the stakes in “Scandal: The Complete Second Season.”

For Olivia Pope and Associates, cleaning up other people’s messes takes a shattering personal toll. Season Two blows the lid off Quinn’s identity, exposes Huck’s dark past, and uncovers Olivia’s darkest secret – something so shocking and enormous that it threatens the entire nation. From boardrooms to bedrooms, relive all 22 episodes of the explosive second season of “Scandal” including exclusive, never-before-seen bonus features with this riveting 5-disc set.

The second season of Scandal blew my mind! I loved it 100x more than Season One (which I also enjoyed). It’s the type of show with mysteries and secrets that keep on building and you need to keep watching to know what happens.

In Season Two, we learn who Quinn really is and how she ended up working for Olivia. That info will come in the first few episodes of the season. We also learn more about Huck and his past. Some of the information that came to light surprised me. It made me like Huck’s character that much more.

I like how some episodes had a specific focus that was solved by the end of the show. Then other episodes had a storyline that spanned over several episodes. It seemed to make the show flow really well and keep me wanting to know more.

We see more about Olivia’s past and how she started her relationship with the President when she was working for the White House. Their relationship is up and down throughout the season and that was a bit annoying. I actually don’t want to see her with the President! If she became the First Lady her life as she knows it would not exist. I don’t like the current First Lady, Mellie, either though. She’s manipulative underneath that sweet smile. It doesn’t surprise me that she was involved in the big political scandal that came to light in Season Two.

The season ends on a cliffhanger (of course!) and I can’t wait to uncover the secrets behind that mystery. Season Three can’t come soon enough!