*Disney provided me with an all expenses paid trip to Los Angeles to attend a press junket for The Little Mermaid. All thoughts and opinions are 100% my own and were not influenced in any way.*

On October 1st, 2013, Academy Award winning The Little Mermaid makes its debut onto Disney Blu-ray Diamond Edition with a 3-disc set and restored picture and sound so you can relive the magic and wonder of a spectacular world beneath the sea.

Long before The Little Mermaid was adapted for film by Walt Disney Studios, my mother read me the original Hans Christian Andersen fairy tale. I don’t know if her reading me the story began the start of my love for mermaids, or if she read it to me because I already loved mermaids. If you don’t know the original story, things do not end well for Andersen’s mermaid—she does not live happily ever after with her prince; he marries someone else and the mermaid turns into sea foam. The story broke my heart into a million pieces, and I cried for the mermaid. Then one day I saw an ad on television for the new Disney movie and excitedly yelled for my mom to come into the room and see. She gave me a worried look and said, “you can’t watch that; you’ll cry when the mermaid dies.” Luckily, Disney had included one of the scenes from the end of the movie, showing Ariel in human form wearing a wedding dress. I knew this version of the story would have a happy ending, and that is all thanks to writers/directors Ron Clements and John Musker, whom I met in Los Angeles last month. 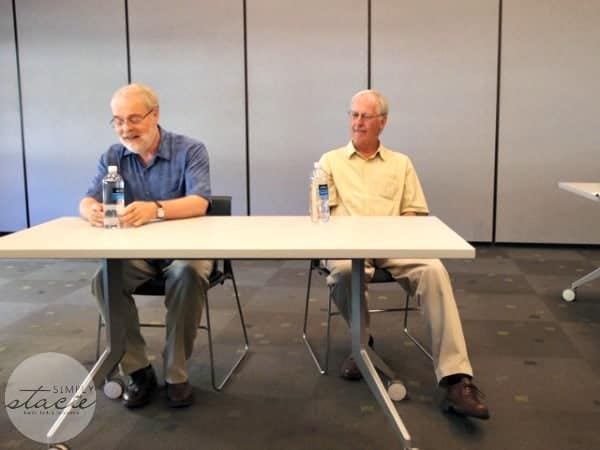 Ron Clement and John Musker have a long history together at Walt Disney Studios. Although they had worked on films together prior to The Little Mermaid, it was when they both were kicked off of 1985’s The Black Cauldron for creative differences that they began to bond with one another. They wanted to remain true to the story in the series of books by Lloyd Alexander, but others wanted to make the film more like Star Wars.

When Michael Eisner and Jeffrey Katzenberg came to Walt Disney Studios from Paramount, they wanted to see an actual script for The Little Mermaid before giving the project a green light. Back then, Disney projects were approved based on notes and outlines rather than a full script. “I asked him if he was interested in collaborating on writing this script,” Ron said of how their adventure on The Little Mermaid began. “We wrote the script together, and Jeffrey actually liked the script a lot … it made sense then that we would direct it.”

Similar taste in films, style of humor, and television shows undoubtedly help them share the same vision on any project they’re working on together. They also each have their own strengths. “Ron’s more big on structure, and I’m a little bit more dialogue oriented … we weren’t doing exactly the same thing, although certainly he wrote some very funny dialogue and I occasionally have a structural idea … the sum is more than the parts.” John said of their collaboration on writing the script for The Little Mermaid.

Outtakes from The Little Mermaid

With any film, characters, scenes, and plot elements often land on the cutting room floor. That holds just as true for animated films, including The Little Mermaid. Ron Clements and John Musker shared a couple of interesting things with us that didn’t make it into the final film.

How the Mermaid Got Her Name

Since I have strong memories of reading The Little Mermaid as a child, I asked Ron Clements and John Musker about their first time reading the original story. Neither one had read it as a child; they read it for the first time as they were preparing to write the script. In the original tale, the mermaid is not given a name. In the two-page treatment for the film, they named her Ariel. Subconsciously, the name may have been inspired by the fiery, spirited daughter of an uptight minister in the film Footloose. “To me, it just seemed like a good name for a mermaid; it just sort of popped into my head,” one of the writers shared.

Howard Ashman wrote the lyrics for The Little Mermaid (as well as Beauty and the Beast and Aladdin), but sadly passed away in 1991. Ron Clements and John Musker were working on Aladdin at the time of his death, and unfortunately Howard Ashman never got to complete the music.

Several songs that Howard Ashman wrote for Aladdin never made it into the animated film, but they are actually in the Broadway stage adaptation.

An animated short featuring Howard Ashman’s songs will most likely be completed sometime in 2014.