My daughter, Keira, spent the first 2 months of her life in the NICU as she was born at 29 weeks gestation. While there isn’t much positive I took away from that period of time, the one thing I am grateful for is that I had the support of the nurses during the initial learning curve. Especially when it came to diaper changes.

Admittedly, I was not the most nurturing type of woman prior to becoming a mother myself. I did not take parenting classes in high school. I did not babysit anyone under the age of five. I did not have siblings so much younger than me that I could help out. The diaper, until about two weeks after Keira was born, remained a mystery. 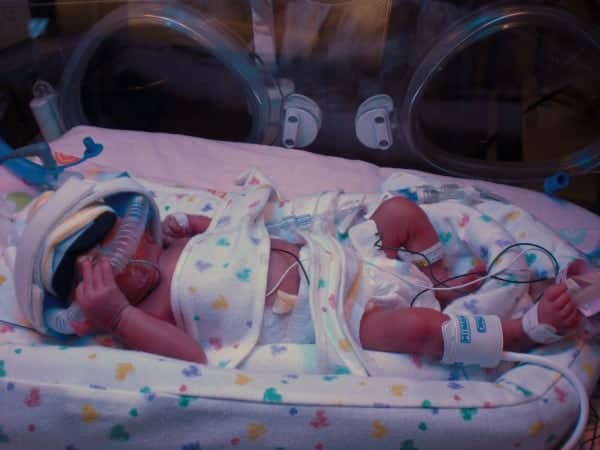 I was shown by a nurse how to change her a couple times before being given the go ahead to do the job myself. She was tiny at just 3 lbs and the diaper change was a bit more complicated than is normal in a newborn. It involves folding of the disposable diaper to make it fit and avoiding all the wiring she was attached to. The first few times I was a little nervous and shaky but soon felt like a pro.

That is until the day of the great poonami and incubator swap.

I showed up one morning ready for diaper change, temperature check etc… and took on the duties myself. I used the hand sanitizer as you must prior to opening the incubator and got started. The diaper change involves sticking your hands into the two arm holes in the incubator after placing all diaper supplies inside. Things seemed to be going well, I had placed a new diaper ready under her and was in the midst of removing her dirty diaper when it happened.

I could tell by her body language that she was about to poo. I could just see it. I quickly moved to catch it all in the clean diaper but the newborn style liquid yellow poo out-manoeuvred me and sprayed all over the incubator and it kept going and going. Not to be gross, but it was running down the sides of the incubator, all over the sheets, all over Keira… it was quite possibly the most disgusting thing ever.

I quickly called over her nurse who looked at me like I was dumb and did something wrong, but together we got her cleaned up but there was no salvaging the incubator. Instead we had to transfer her and all her belongings to a clean incubator while the dirtied one was removed to be cleaned by some poor person.

When I left that day, I left feeling not too confident in my diaper changing skills.

The next day, when I showed up I noticed Keira was in yet another incubator. The nurse from the day before was there to greet me, and she laughingly told me Keira pulled the same trick on her just a few hours prior!

It just goes to show, it doesn’t matter how much you know about babies… you just have to be quicker than them.

During the week of Sept. 23, the Playtex Mommyville Facebook page will be dedicated to Diaper Diaries, where fans can share their stories with others, creating a fun and informative dialogue all about the challenges of motherhood. You can share and read stories just like mine. I know that each one of you moms out there have at least one hilarious or crazy story to tell about an epic diaper change!

Elizabeth is an IT Professional and a Family Review Blogger at Frugal Mom Eh. She enjoys writing about a variety of topics including parenting and frugal living. When not writing she enjoys playing with her daughter ‘Keira’, painting and reading.