On August 20th, 2013, Disney’s Return to Never Land landed in stores in a new combo pack containing the Blu-ray, DVD, and Digital Copy. As a huge fan of the original 1953 Peter Pan, I was so excited when the first ads came on TV to announce this sequel. Return to Never Land is for anyone who ever wondered what became of Wendy, if she ever saw Peter Pan again, or if Captain Hook escaped the hungry jaws of the crocodile and took his revenge on Peter Pan. 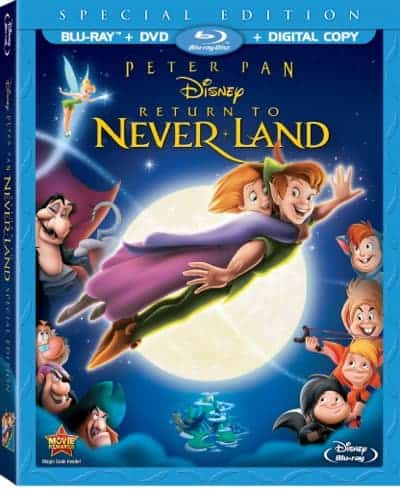 In Return to Never Land, Captain Hook is once again behind the helm of the Jolly Roger and has traveled to London to kidnap Wendy as bait for Peter Pan. But Hook unknowingly takes Wendy’s practical daughter, Jane. As expected, Peter Pan dashes to save “Wendy.” Hook’s plan doesn’t go as well as he’d hoped, and soon Jane is with Peter Pan and the Lost Boys in their secret hiding place.

Eager to get home to her mom and little brother, Jane has her spirits crushed when she learns that the only way out of Never Land is to fly. Having grown up way too fast due to the war, Jane has never believed in Wendy’s Peter Pan stories or in Never Land. Peter Pan, Tinker Bell, and the Lost Boys must help her to believe—before she betrays them all to Captain Hook.

In Return to Never Land, Peter Pan almost feels like a completely different person. He loved to tease Wendy, but he is much kinder to Jane, as is—shockingly—Tinker Bell. To my knowledge, none of the original voice artists reprise their roles. Some are more noticeable than others, but Captain Hook’s and Peter Pan’s were very convincing in certain parts throughout the movie.

Overall, I really enjoyed the movie, but wish a different name had been chosen for the dog. “Nana Two” seemed such a weird thing to call the dog; just call her Nana (we’ll all know it’s not the same Nana as from the first movie) or give her a different name.