Celebrate the 25th anniversary of Disney’s Oliver & Company with the Blu-ray DVD combo pack, released on August 6th, 2013. Disney puts a “twist” on the classic Dickens tale Oliver Twist with a modern story set in New York City and starring a cast of lovable, furry dogs and one cat who’s just looking for a home to call his own. 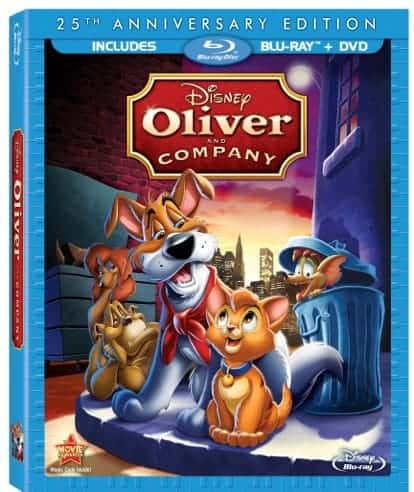 Oliver (Joey Lawrence) is a kitten who is left to fend for himself on the unfriendly, cold streets of New York City. One day as he attempts to find food to eat, he encounters the streetwise dog Dodger (Billy Joel) and falls in with the wrong crowd. Dodger and a group of dogs belong to Fagin (Dom DeLuise), a human who owes money to an influential and frightening man by the name of Sykes (Robert Loggia).

Oliver is taken in by the dogs and by Fagin, but when he meets Jenny (Natalie Gregory), a lonely girl who just wants a friend, he feels loved and at home. Dodger and the gang attempt to rescue Oliver, and soon Jenny becomes caught up Sykes’ plan to get the money he is due. Now it’s up to Oliver, Dodger, Francis, Tito, and the other dogs to save Jenny—and themselves!

Oliver & Company is a heartwarming tale about friendship and learning the difference between right and wrong. Oliver knows no other way of life but petty theft, which he learns from Dodger and the other dogs, as they try to help Fagin get out of the debt he owes to Sykes. Meeting Jenny shows Oliver that he can live a good and honest life. Oliver’s presence in Dodger’s life and Fagin’s as well softens them and makes them accept a cuddly little kitten.

Oliver & Company wasn’t one of the movies I knew well as a child, but my five-year-old loves all of the Disney movies with animals as the main characters. The added bonus to this movie is that it’s based on a classic novel, and kids who grow up loving it may also one day decide to read the novel on which it’s based. I know I’ve done that myself with Disney movies—I was twelve or thirteen when I decided to attempt reading The Hunchback of Notre Dame!

From an adult’s perspective, Oliver & Company has some wonderful musical numbers (especially Bette Midler in the role of Georgette) and a lovely opening song called “Once Upon a Time in New York City.” I also love the hand drawn animation against the static backgrounds. Can you believe over three hundred artists were involved in creating those characters and settings?

“Lend a Paw” Short—A Mickey Mouse short in which Pluto rescues a kitten from drowning and then has a hard time accepting it as a new member of the family.

“Puss Café” Short—A Pluto short in which Pluto must defend the cats, birds, and other tempting morsels against a couple of cats looking for a snack.

Sing-Along Mode—Sing along to your favorite songs as the words go across your screen.

Publicity Spots—Check out the original trailer, the re-release, and other promotional footage for the film