I learned a few things I didn’t know about Gwyneth Paltrow when she spoke to us last month at the Sheraton Universal to promote her new film, Iron Man 3. Being an actress keeps Gwyneth plenty busy, but she’s also a wife, mother of two, and author. Based on what I knew of her and her lifestyle, she has it pretty together in all aspects of her life. What I didn’t know was that two years ago Gwyneth had a health scare because she was taking on too many things and hadn’t been eating as healthy as she could. 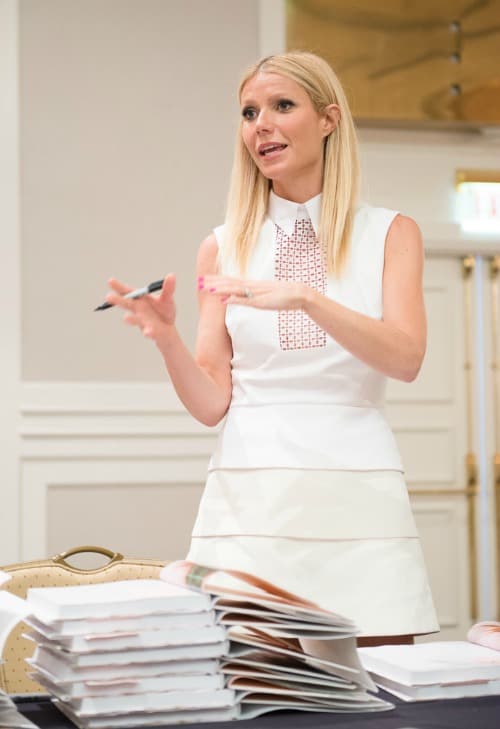 “I had this really insane period where I had this movie, Country Strong, coming out; I was filming Glee, and I was having to sing live… it was really hard on me. I was just like steadily wearing myself down and I think there was some emotional stuff, too.” What followed was Gwyneth believing she was suffering a stroke after the right side of her body went numb. After getting tested for every possible illness, she learned she had low vitamin D and B, her estrogen was messed up, and she had a cyst on her ovary. Several doctors recommended medication and surgeries, but she took the advice of another doctor who suggested an elimination diet. For three weeks, Gwyneth ate a clean diet of things like chicken, figs, and vegetables while eliminating coffee, alcohol, and sugar, to name a few.

To her surprise, within three weeks nearly all of her problems had gone away. “I did have to get my cyst out with surgery, but other than that, I fixed everything with the food. And I was like, this is incredible. Food really is medicine.”

Gwyneth does her best to cook healthy meals at home for her family, but also knows that she doesn’t have complete control over what her children eat when they are away. “I try to cook really healthy at home because I can’t control what they eat at home or at friend’s houses. Nor do I want to. I want them to be autonomous and make their own choices and have a life.” Gwyneth’s children also participate in the cooking process. “Every weekend, we cook something together…My son, especially, is really, really into it, and he can perfectly crack an egg.”

Gwyneth’s love of cooking is something she shared with her father, Bruce. After her father passed away, she began writing down all of her recipes. “We learned together and our connection to food was such a part of our relationship, and so I thought it would be really nice because I sort of felt him in the kitchen, and I sort of felt it would be nice to write the recipes and kind of pay homage to him and our relationship at the same time.” 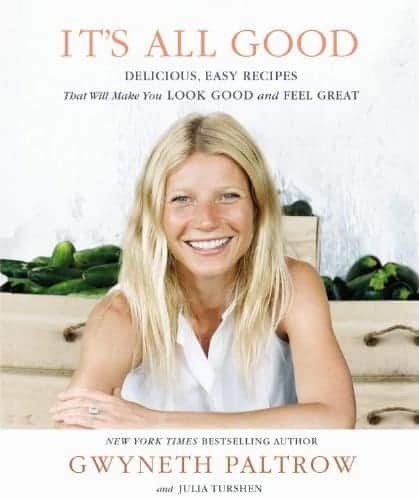 It’s All Good: Delicious, Easy Recipes That Will Make You Look Good and Feel Great was published in April 2013, and Gwyneth gave each of us our very own copy. She even took the time to personalize and sign each one for us. It’s such a beautiful book, something that belongs just as much on display as in the kitchen.

As a mother of one, I can relate to Gwyneth’s own struggles with her son Moses’ allergies. Though Zoe’s allergies are mild compared to those of Gwyneth’s son, it still presents a challenge when certain foods are offered to her and our fears about her starting kindergarten and accidentally ingesting foods we know she should not eat. Ice cream and milkshakes are some of my favorite indulgences, and Zoe likes them too. Unfortunately we’ve come to realize that she is lactose intolerant and gets a tummy ache almost every time she has some. One of her favorite treats is hot chocolate, which from now only can only be an option if it’s made with water. Her second known allergy, cashews, scares me far worse. In addition to a tummy ache, her lips and throat swell up and she’s vomited from them before. We plan on getting her to an allergist before kindergarten so there are no more unpleasant surprises.

Gwyneth’s cookbook offers a wealth of information that I cannot wait to put to use in our own kitchen. My husband often talks about wishing to drop some of the weight he’s put on, but never actually strives to do anything about it. I’m hoping he’ll look through the cookbook with me so we can find some great new meals to try together.

One of the recipes I’m most looking forward to trying (especially for Zoe) is on page 261, and is called Banana “Ice Cream” with Sweet and Salty Roasted Almonds. We know that almonds are a safe nut for Zoe, and we also know she loves the flavor of banana bread. This is a vegan dish, yields a pint, and has the texture of ice cream. Best of all, most of the ingredients it contains are things we often have on hand (or are inexpensive and easily found), so it won’t be expensive to make.

Definitely check out Gwyneth’s new cook book if you are looking to make better food choices for yourself and your family, or if you need fresh ideas to include in a healthy eating plan you already live by!

*I received an all expenses paid trip to Los Angeles to attend the red carpet premiere of Iron Man 3 and to interview select cast and crew members. I also received a complimentary copy of the book mentioned in this post. All thoughts and opinions expressed are entirely my own.*