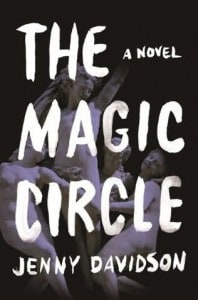 Title: The Magic Circle: A Novel

The Magic Circle by Jenny Davidson follows the lives of three highly educated young women: Lucy, Ruth and Anna. The book is mostly told from the perspective of reserved Lucy, however, a section of the novel is also dedicated to Ruth’s perspective as well. The reader is given a glimpse into the mind of the provocative Anna through her blog posts. Meticulous Ruth, is creating a live action role playing game (LARP) built around the history of the Asylum, near Columbia University. The other two women also become engrossed in the creation of her live action game, Lucy, because, it helps towards her rent and Anna because she has a more altered view of the world of LARP games. She believes that games should greatly affect the mind of the participants, challenging them psychologically in ways, which they have never been tested. The choice between a more academic path or a psychological path is soon decided, and the consequences are deeply vexing.

Initially, the book is slowly deliberate. The first part of the book is mainly dedicated to introducing readers to the world of LARP. Also, glimpses of the characters’ relationships are shared and potential conflicts down the line are introduced in the first section. In the second part of the novel, the pace changes just a bit, delving just a smidge more into the actual game play, and through Ruth, the readers are brought into the mind of Anna. Anna, we learn has a madness to her, which in a sense adds to her intrigue, an intrigue, which perhaps leads Ruth into developing a surprising interest in Anna’s distinctive style of game play, a style, which easily blurs the line between reality and fiction.

Anna’s brother, Anders is eventually introduced near the end of the novel, given the description of the novel, I expected him to play a larger role throughout. Anders is a peculiar character and his intentions are questionable from the start. He, like his sister and Ruth are also interested in LARP, but his preference in play is much closer to his sister’s. The three women and Anders are soon immersed in a Greek tragedy, The Bacchae. What transpires throughout the rest of the novel is a disturbing journey into a deep immersion. An immersion, which plucks the characters out of reality, strips them of their characteristics and transforms them into tragic Greek characters. The lines between the real and the unreal begin to blur and it is quite apparent that the end results will be catastrophic.

I wanted to love The Magic Circle, but I could not. Of course I appreciated the fact that the women were well educated, but their choices betrayed their education. There is heavy drinking throughout the novel, particularly near the novel’s end. The ease at which they allowed themselves to become immersed in this peculiar game, was questionable and outside the line of reasoning. Ruth, was presented as such a controlling character, yet, she quickly lost control while in the midst of the LARP. Lucy’s actions were also highly questionable, her heavy drinking and sexual exploration with a stranger during the game was unlike her character’s earlier portrayal. I also had a difficult time picturing late twenty and early thirty something’s running through the streets of New York playing a Greek game while dressed in their perspective roles. Their actions were foreign to who they were as people and there was not a suitable explanation given as to why they would allow themselves to so easily become something so dangerous, so different. Certainly, I discovered myself immersed in the novel, but I was unsatisfied with the choices made and the why behind it all. Perhaps if Davidson focused more so on why the characters so easily allowed themselves to become so transfixed by a game, the choices would be much more satisfying. As it stands, the decisions made were perplexing and left me disconnected from the characters. The Magic Circle’s promise as a novel is apparent, and it is worth reading, due to the uniqueness of the way in which the story is developed, however, the characters fell short of what was needed to pull off the idea behind the novel.

Check out the book tour page at TLC Book Tours.

*I received a copy of this book for review, but was not compensated financially in any way. The opinions expressed are my own and are based solely on my experiences while reading this novel.*