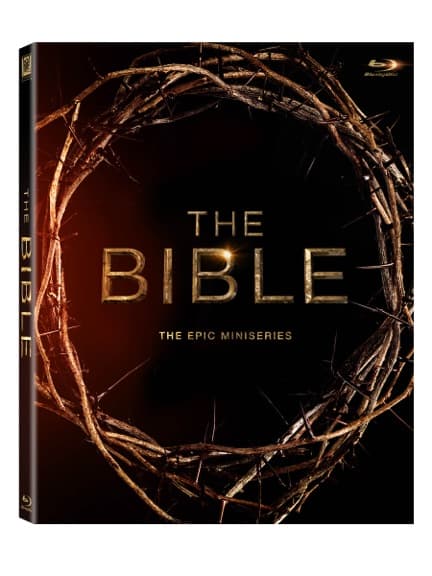 Featuring hours of never before seen behind-the-scenes footage and making-of featurettes in a stunning high bit rate HD transfer and immersive 5.1 audio, THE BIBLE is the must-own Blu-ray and DVD event of the year. The Blu-ray and DVD exclusively feature an all-new cut of the miniseries featuring more of the stories you know in ways you’ve never seen.

Breathtaking in scope and scale, THE BIBLE features powerful performances, exotic locales and dazzling visual effects that breathe spectacular life into the dramatic tales of faith and courage from Genesis through Revelation. This historic television event is sure to entertain and inspire millions across the globe.

The four-disc Blu-ray and DVD set dives deeper into the making of the series and features a behind-the-scenes look at how the groundbreaking docudrama came together. Interviews with producers, directors, and cast illustrate creative collaboration on-set and off and show how the remarkable Moroccan scenery was transformed into the world of the Bible.

Blu-ray and DVD audiences will be captivated by the special features, including:

● The Bible: Genesis – With Mark Burnett and Roma Downey as our guides, we discover how the team approached the daunting task of filming the stories of the Bible

● The Cast of The Bible – Highlighting the international cast, we join Mark and Roma on their search for the perfect actors to bring the characters from the Bible to life

● The Bible: Creation – An emotional three-part journey through the making of THE BIBLE

○ Creation I: The Vision, The Look – Discover the vision of producers Roma Downey and Mark Burnett in this behind-the-scenes look at how THE BIBLE was created including the incredible team, beautiful location, high-quality production and superb costume design

○ Creation II: Production Stories – An exclusive behind-the-scenes look at the challenges faced by the production – including the supernatural experiences with snakes on set – plus Diogo’s approach to portraying who he has called the most complex figure in human history

○ Creation III: Crucified & Resurrected – A deeper look into the emotional filming of the crucifixion, resurrection and the last days in Morocco

● The Bible: Visual Effects – A montage of the striking visual effects that make THE BIBLE the most high-quality Biblical epic of all time

Watching The Bible was an emotional journey for me. I believe in God, but I don’t consider myself a religious person. Growing up, our family went to an Anglican church. I went to Sunday school and was a church server as a teen. As an adult, we moved around so much being a military family that we were never with a church very long. However, my faith was still strong and I pray daily, but in my own way at home.

With that said, I was not prepared for The Bible and the feelings it would bring out in me. I was moved to tears by many of the scenes especially the ones with Jesus. It also reminded me of some long forgotten Bible stories and the important messages they carry.

Each episode is a different story from the Bible. We begin with the Old Testament and move in chronological order. The first story was Abraham’s who is tested and told to kill his son. He is just about to stab him to death before God stops him. It was a test to prove his faith to God. It was really hard to watch and I kept saying, “I can’t believe he’s actually going through with it!”. I didn’t remember the story of Abraham so it was completely new to me.

However, I did know the story of Moses which was featured in the second episode. My favourite part of that episode was Moses parting the sea for his people to cross to safety. The special effects were really something!

Be prepared for violence and blood. I had to turn my eyes away a few times. People were killed in every episode I think!

My favourite episodes were from the New Testament with Jesus. We watch his birth, baptism, how Jesus finds a few of his disciples and ultimately his death and resurrection.  Diogo Morgado was phenomenal playing the part of Jesus. He had Jesus’ love for humanity, wisdom and kindness down perfectly. I was captivated by all his scenes.

The hardest episode for me to watch was called Passion. It was Jesus’ crucifixation. It was horrendous. The pain and torture that Jesus endured broke me down. And still, Jesus asks God to “forgive them for they know not what they do.”

I was honestly sad after I watched the last episode. I didn’t want it to end especially the stories of Jesus. It made me want to dust off my Bible and read it and see how it compares to the miniseries. I’ll definitely be watching this one again.