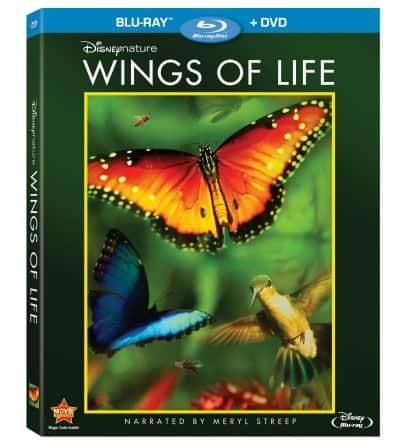 Spring is in the air—literally—as Disneynature prepares to unveil “Wings of Life,” a spectacular, closer-than-close, high-definition look at the intricate world of butterflies, hummingbirds, bees and bats, and their life-sustaining collaboration with flowers. Directed by Louie Schwartzberg (“America’s Heart & Soul”) and narrated by Academy Award® winner Meryl Streep, “Wings of Life” will be available on Blu-ray™ Combo Pack, Digital and On Demand on April 16, 2013—just in time for Earth Day.

“In the chaos and craziness of our day-to-day lives, few of us stop to consider what’s happening behind the scenes in nature that makes our lives possible,” said Streep. “This film is a stunning adventure that literally takes flight alongside all kinds of winged creatures—butterflies, bees and bats—each working hard to pollinate our planet.”

Said Schwartzberg, “For me, the joy of doing this film is to be able to explore worlds that humans can’t easily experience—bats sipping nectar in the middle of the desert at night, orchid bees expertly manipulated by a bucket orchid, exotic hummingbirds flying like airborne dancers, and a clustering monarch colony with millions of butterflies. I hope to share the spectacle of nature and to spark in others the sense of wonder I have about the natural world.”

Employing multiple cameras, both time-lapse and high-speed cinematography and extraordinary patience (while nature took its time unfolding), filmmakers shot on location in more than a dozen areas, ranging from the El Rosario Preserve in Michoacán, Mexico, to Organ Pipe Cactus National Monument Park in Arizona. “Wings of Life” features extraordinary imagery shot with digital cameras—one capable of frame rates of up to 1500 frames per second, and the use of a pinhole lens, which allowed the cameraman to get within millimeters of an insect subject while retaining a clear view of the background. The resulting imagery—intimate and breathtaking—is brought to life for audiences through spectacular high-definition picture and sound quality.

To celebrate the debut of “Wings of Life,” Disneynature has made a contribution to the Disney Worldwide Conservation Fund (DWCF) to protect pollinators worldwide. The DWCF has already supported more than 20 projects across North America focused on protecting pollinators and their habitats. Grants have helped conservationists save endangered butterflies, expand habitat for honeybees and educate children about the importance of pollinators and how they can help protect them.

The “Wings of Life” Blu-ray Combo Pack includes a sneak peek at Disneynature’s 2014 big-screen adventure “Bears.” In an epic story of breathtaking scale set against a majestic Alaskan backdrop teeming with life, the film, which is currently in production, follows two mother grizzly bears as they impart life lessons to their impressionable young cubs. 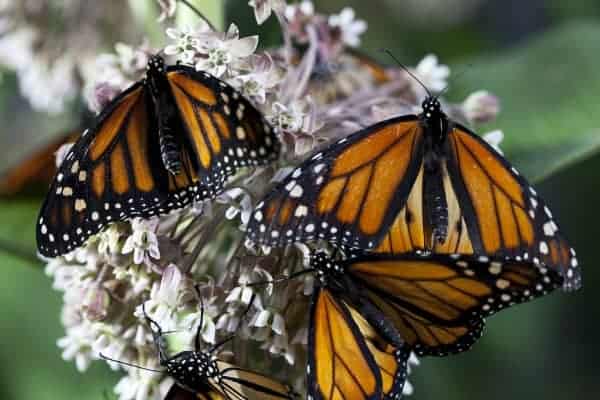 I’m a big fan of Disneynature and was anxiously anticipating the release of their newest addition to the family: Disneynature: Wings of Life. From just looking at the cover, I thought it would be a film about butterflies and birds, but it’s actually all about flowers and pollination and the important role these winged creatures play in their survival.

I think this has to be one of the most captivating and beautiful films I’ve seen in a long time. You need to see the cinematography! Not only were the colours absolutely stunning, but the audience is able to get up close and personal with creatures that we normally don’t pay much attention to: insects. You could actually see their faces and make out their facial features. It made me look at insects in an entirely different light. They have a HUGE role to play in pollination and without them, flowers like we know them would not exist.

We first meet the Orchid bees looking for orchids in a lush rainforest. The bee finds the flower and has to climb a waxy slope to get at the scent it needs to collect in order to attract a mate. However, the flower is designed to ensure it’s own survival and the bee falls into a bowl of secretions. There’s only one escape route and it’s exactly where the orchid wants him to go. When he does finally escape, he is gripped by the flower while it implants its only two pollen pods it will ever make on the back of the bee. It holds him there until the glue is dry and then releases him. The bee then flies to the next orchid with those two pollen pods and pollination occurs. Isn’t nature extraordinary?

I also enjoyed hearing the story of the Nectar bats of Northern Mexico. They live on an island and fly at night to the Sonoran Desert to feast on the flower of the cacti. Without these flowers, the bats would not survive. The bats in turn aid pollination and ensure the survival of cacti. As you can see, it’s a give and take relationship where one cannot exist without the other.

Another part I really liked was the segment on the Monarch butterflies. They make the longest migration of any insect. They travel to the US Midwest and Canada every year just for one thing: milkweed! I also learned that the reason the Monarchs are orange and black. It’s to warn predators to not eat them because they are poisonous. Milkweed is poisonous to every other creature, but the Monarch butterfly.

I plan to show my daughter this movie because I think she will really like it and it can teach her about the wonders of nature.

Check out my other reviews of Disneynature films including Oceans, Chimpanzee, The Crimson Wing and African Cats.

Check out the trailer: