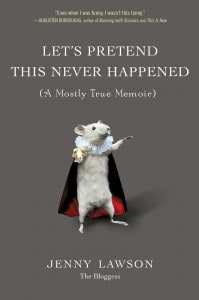 When Jenny Lawson was little, all she ever wanted was to fit in. That dream was cut short by her fantastically unbalanced father and a morbidly eccentric childhood. It did, however, open up an opportunity for Lawson to find the humor in the strange shame-spiral that is her life, and we are all the better for it.

In the irreverent Let’s Pretend This Never Happened, Lawson’s long-suffering husband and sweet daughter help her uncover the surprising discovery that the most terribly human moments—the ones we want to pretend never happened—are the very same moments that make us the people we are today. For every intellectual misfit who thought they were the only ones to think the things that Lawson dares to say out loud, this is a poignant and hysterical look at the dark, disturbing, yet wonderful moments of our lives.

Note: The paperback copy that was just released has a new chapter!

I don’t often read humour books, but I made an exception for Jenny Lawson’s new book, Let’s Pretend This Never Happened. She’s a hugely popular humour blogger and is otherwise known as The Bloggess. (Yes, I spell humour with a “u”…I’m Canadian). I’ve read her blog off and on for a few years now. She is hilarious! I love her reply when she gets a bad pitch from PR. She sends them this post of Will Wheaton collating papers.

Let’s Pretend This Never Happened had me laughing so hard I cried. I took it with me to the hairdressers and read a few chapters while I was waiting for my colour to process. I tried to hold back, but I couldn’t help giggle to myself as I read some of the crazy stories!

The book begins with Jenny’s childhood in the small town of Wall in West Texas. Jenny’s dad is a taxidermist and has a love of animals. He was always bringing home strays. I’m not talking dogs and kittens here. He brings home wild animals (and birds). I really enjoyed Jenny’s story about the psycho turkeys that used to follow her and her sister to school. They made a big mess at school and Jenny’s dad had to come and clean it up. That was the Great Turkey Sh** Off of 1983 and it had me laughing so hard my sides hurt.

Jenny’s high school had courses that we definitely did not have at my high school in Ontario! One of her courses had her going to a farm and artificially impregnating a cow.  She ended up getting her arm stuck in the cow’s vagina. I’m serious! It’s one of the funniest parts in the book.

Another chapter that had me in stitches was the fox infestation in Jenny’s backyard. This happened was after she was married and had her daughter. Jenny read that foxes (or foxen as she calls them) were territorial so she wanted her husband Victor to go and pee around the yard’s perimeter to stop them from coming in. He refused so Jenny asked her mom if her dad could come and pee around the yard. Since they lived far away, her mother said that maybe daddy could mail some of his pee!

Jenny also shares some of her more serious experiences. She talks about her battle with anxiety, her miscarriage and the death of her dog. When she shared about what happened to her beloved pet pug, I cried. I could see how much she loved the dog. I really felt for her because I know what it’s like to lose a family pet.

I think Jenny’s had some bizarre experiences both growing up and as an adult and they have shaped her into the person she is today. Let’s Pretend This Never Happened is brilliantly funny. Jenny is a very talented writer and storyteller and by the time I was done reading, I felt like I knew her as a person. That to me is a sign of a great memoir.