Save Your Token and Classic Monopoly with Speed Die Review

I’ve been a fan of the Monopoly board game for as long as I can remember in all its many forms (board game, McDonald’s Monopoly, and multi-player online). As a teen, I bought my first Monopoly game in Las Vegas at the MGM Hotel and Casino when the Wizard of Oz store still existed. The Wizard of Oz themed Monopoly game was the only one I had to offer up when friends wanted to get together and play, but I always thought it was fun and got a kick out of trying to own the Emerald City and the Yellow Brick Road. Just last year, I reviewed an updated version of Monopoly which allows players to track their earnings and spendings electronically. I love the ease of it, but nothing could ever replace the classic version of Monopoly. 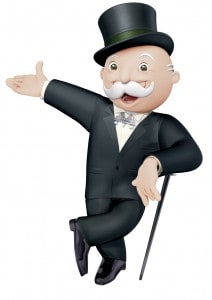 When I received an email in late January stating that one of the classic tokens from Monopoly would be retired and a new token would be voted into the game, I knew I needed to finally get the classic Monopoly game to add to my board game collection. There are a few tokens I just can’t do without, and they are the iron, the thimble, and the wheelbarrow. I’m also pretty partial to the top hat and the Scottie dog. No matter what the decision is, I’ll be sad to see any of the classic tokens go.

There are still a few days left to try to save your favorite token! If you haven’t voted already, visit Monopoly’s Facebook page to vote for your favorite token. Voting ends on February 5th. Unfortunately for me, it looks like the top hat and the wheelbarrow are in the most danger!

Hasbro kindly sent me the classic version of Monopoly to play with my family and friends. While all of the rules are exactly the same as they’ve always been, play time can be speeded up even more with the Speed Die. This is the first time I’ve seen the die, and I can’t wait to play a game using it. Players are given $1000 instead of $1500, the Speed Die is only used after a player goes past Go for the first time. It has numbers one through three on it, as well as images of a Bus and Mr. Monopoly on it. If the die lands on Bus, you get to decide if you move the total number on both white die, or just one of them. This would be especially useful if there is a specific property you want to land on (or avoid!). If you rolled Mr. Monopoly, you would move the total number on the white die and then go forward to the next unowned property. At that time, you can either buy it or auction it.

The last time I played Monopoly with friends, our game was at least two hours long. I’ve played longer games even than that, but with the addition of the Speed Die, I’ll have a better chance of getting people to play with me since the game will be shorter!

What classic token is your favorite? What new token will you be voting for?

*I was not financially compensated for this post. I received a sample of this product for review purposes. The opinions are my own, based on my experience with the product.*