Easter Parade was just released on Blu-ray on February 19th for the very first time! It stars Judy Garland and Fred Astaire and was originally released in 1948. 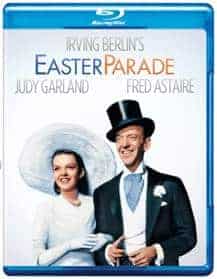 If you can’t join ’em, beat ’em! When his long-time dance partner abandons him for the Ziegfeld Follies, Don Hewes decides to show who’s who what’s what by choosing any girl out of a chorus line and transforming her into a star. So he makes his choice and takes his chances. Of course, since Fred Astaire portrays Don and Judy Garland plays the chorine, we know we’re in for an entertainment sure thing.