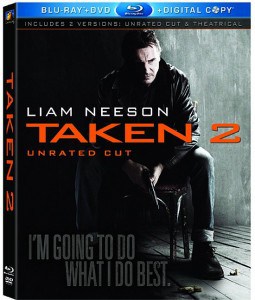 Brace yourself for the Unrated Cut of Taken 2, with even more unstoppable action and thrilling suspense – plus in-depth extras that take you deep behind the front lines of a one-man war. Liam Neeson returns as Bryan Mills, an ex-CIA operative, who finds himself “taken” hostage along with his wife. To survive, Bryan must enlist the help of an unlikely ally and use his brutally efficient skills to take out his kidnappers.

I was a huge fan of Taken and was anxiously anticipating watching its sequel, Taken 2. Unfortunately, this movie did not live up to my expectations and I found it rather disappointing. I had a hard time getting into the movie and was ready to turn it off halfway through. Even the scenes that should have been exciting and thrilling to watch like when the bad guys kidnapped Liam Neeson’s character, Bryan and his ex-wife, Lenore, did not make me sit on the edge of my seat in anticipation.

Basically how it all goes down is Bryan and his ex-wife, Lenore are kidnapped while on a trip to Turkey by the same group of people who took his daughter, Kim, in the first movie. The father of the kidnapper who Bryan killed wants revenge and has plans to capture the whole family. The kidnappers were unsuccessful at getting Kim as she hid in a closet in a hotel room. After being captured and hung up on chains, Bryan manages to call Kim with a cell phone he still has on him. He tells her to draw circles on a map using co-ordinates that he somehow figured out while he was stuck in the trunk of his kidnapper’s car. Then he tells Kim to set off grenades and then draw another circle on the map. He gives her an address and tells her to go there and wait for his call. More grenades at this location too and then Kim drops a gun down a steam shaft to give to her father. It just goes on from there.

I don’t know much about Turkey, but wouldn’t it be strange and warrant swarms of police if a person was throwing grenades in city limits? Kim was throwing them to help pinpoint her dad and I kept thinking wow what if she hits someone?

When Kim finally does rescue her dad, they take off in a car in the winding back alleyways of Istanbul with Kim at the wheel. In America, Kim was just learning to drive, but in Turkey she could drive a stick shift like a race car driver navigating the narrow roads like an expert. I guess that’s why it’s a movie because in real life, she would have crashed the car for sure. There was just a lot about this movie that did not make sense to me.

The one good thing I can say about Taken 2 is that Liam Neeson is a wonderful actor and did what he could with the script. I enjoy his movies and will watch anything he does, BUT I just hope there won’t be a Taken 3. I probably won’t be watching it!