I’ve got two more Christmas movies to share with you today. Have you seen them before?

A dog and a mouse head for the North Pole to deliver a lost letter. Hanna-Barbera superstars lend a helping hand to the world’s friendliest ghost. The greediest boy in the world discovers the magic of giving. What could three such different tales have in common? Hanna-Barbera and Santa Claus, that’s what! Hanna-Barbera assembled its mightiest talents of pen and voice to produce one of its first forays into prime-time animated Christmas specials, A Christmas Story, the tale of Goober and Gumdrop’s quest to save Christmas for one little boy. Dick Van Dyke narrates The Town Santa Forgot, based on Charmaine Severson’s beloved poem “Jeremy Creek” about the confusion created by a gargantuan wish list. Casper’s First Christmas sees Casper facing a Christmas Eve eviction when he receives holiday help from the likes of Yogi Bear, Boo-Boo, Huckleberry Hound, Snagglepuss, Quick Draw McGraw, Augie Doggie and Doggie Daddy. This collection includes: A Christmas Story (1971), The Town Santa Forgot (1993), Casper’s First Christmas (1979). 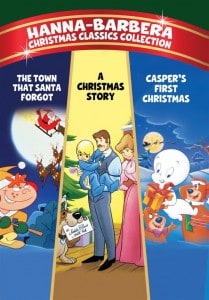 Four family classics from the studio that helped make the holidays magic! The Little Drummer Boy Book II: Starting where the original left off, Book II sends Aaron, the little drummer boy, off on a quest to aid Simeon, crafter of the silver bells. With Greer Garson and Zero Mostel. The Stingiest Man in Town: Rankin/Bass departs from its usual stop-motion “Animagic” process for this line animation adaptation of Dicken’s A Christmas Carol. With Walter Matthau, and Tom Bosley. Pinocchio’s Christmas: After Fox tricks him out of a gift for Geppetto, Pinocchio sets out on an adventure to reclaim Christmas. Along the way he meets up with a beautiful marionette and a jolly old man in a flying sleigh. With Alan King. The Leprechaun’s Christmas Gold: A sailor and a leprechaun join forces to reclaim the Christmas gold after a wailing banshee makes off with it, thanks to the sailor’s blunder. With Art Carney and Peggy Cass. 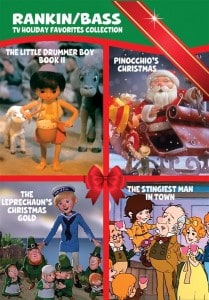