In the acclaimed book trilogy by author, Deborah Ellis young adult readers will be introduced to an eleven year old girl named Parvana who struggles to thrive under the Taliban rule in Afghanistan. In the first story, The Breadwinner, Parvana’s father is considered a “criminal” because he was educated in a foreign country and when her mother becomes ill, Parvana must transform herself into a boy so she can earn money for her family. Contained within one book, the trilogy continues in Parvana’s Journey (the sequel) which is the story of Parvana’s desperate search for food and shelter and ultimately her lost family as she travels through the Afghan countryside. Along the way she encounters other lost children who have been displaced by the war. Finally, in Mud City Parvana’s friend, Shauzia flees Afghanistan for a refugee camp in Pakistan as she dreams of a new life in France. Will Shauzia be able to change the course of her life and her destiny? 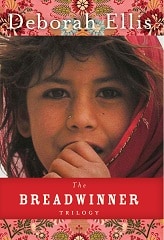 The Breadwinner Trilogy is a riveting chapter book series that introduces young readers (and even adults) to real world social issues that face children in war torn countries. The author succeeds in writing juvenile fiction that translates sadly as all too real. This book trilogy took hold of me in a way that left me wanting to learn more about the children of Afghanistan and will definitely be saved for my children to read when they are older. I would recommend this book for tweens ages 10-14, teenagers and even adults interested in learning more about the children of Afghanistan.

In addition to The Breadwinner Trilogy, Deborah Ellis has released the extraordinary sequel titled, “My Name is Parvana” (hardcover $16.95) which features Parvana who is now 15 years old and is being held by American troops as a suspected terrorist in Afghanistan. During her detainment, she reflects on the last four years of her life in what is a gripping story that kept me awake all night reading it. 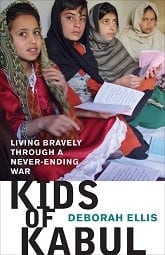 Finally, Kids of Kabul features the real-life stories of boys and girls ages ten to seventeen who live in Afghanistan and who have had their families torn apart by war. Their braveness and resilient spirits are inspiring and captivating.