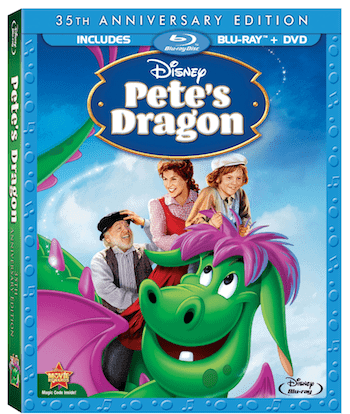 On October 16th, Disney will release PETE’S DRAGON 35th Anniversary Edition Blu-ray. This timeless classic will be available for the first time in high definition with new digital restoration. This film celebrates Pete and his dragon Elliott’s magical friendship and features heartwarming songs including the 1977 Academy Award® “Best Original Song” nominee, “Candle On The Water”!

Synopsis: Rediscover with your family the endearing story between Pete and his invisible dragonfriend Elliott as they develop a special bond and share a magical friendship. With memorable characters and heartwarming songs including the 1977 Academy Award® “Best Original Song” nominee, “Candle On The Water,”Pete’s Dragon 35th Anniversary is the perfect timeless classic every member of your family will love.

Cast: Mickey Rooney (The Fox and the House,Night at the Museum), Helen Reddy(singer/songwriter), Sean Marshall (The Small One, The New Adventures of Heidi), Red Buttons (The Poseidon Adventure, The Longest Day) and Jim Dale (TV’s “Pushing Daisies”)