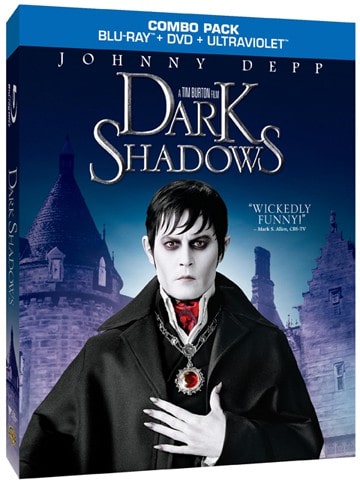 In the year 1750, Joshua and Naomi Collins, with young son Barnabas, set sail from England to start a new life in America, where they build a fishing empire in the coastal Maine town that comes to carry their name: Collinsport. Two decades pass and Barnabas (Johnny Depp) has the world at his feet. The master of Collinwood Manor, Barnabas is rich, powerful and an inveterate playboy…until he makes the grave mistake of falling in love with a beauty named Josette DuPres (Bella Heathcote) and breaking the heart of Angelique Bouchard (Eva Green). A witch in every sense of the word, Angelique dooms him to a fate worse than death—turning him into a vampire, and then burying him…alive.

Nearly two centuries later, Barnabas is inadvertently freed from his tomb and emerges into the very changed world of 1972, a stranger in an even stranger time. Returning to Collinwood Manor, he finds that his once-grand estate has fallen into ruin, and the dysfunctional remnants of the Collins family have fared little better, each harboring their own dark secrets.

Family matriarch Elizabeth Collins Stoddard (Michelle Pfeiffer) is the one person Barnabas entrusts with the truth of his identity. But his rather odd and anachronistic behavior immediately raises the suspicions of the live-in psychiatrist, Dr. Julia Hoffman (Helena Bonham Carter), who has no idea what kind of problems she’s really digging up.

As Barnabas sets out to restore his family name to its former glory, one thing stands in his way: Collinsport’s leading denizen, who goes by the name Angie…and who bears a striking resemblance to a very old acquaintance of Barnabas Collins.

Johnny Depp gives another brilliant performance in a film by Tim Burton. He’s one of my all-time favourite actors because he plays such unconventional and quirky characters. His role as Barnabas Collins in Dark Shadows definitely fits into that trend.

I would consider Dark Shadows a dark comedy because it was so funny! Johnny Depp was hilarious as a vampire returning to life in the future after being stuck underground in a coffin for 200 years. Even in the 1970s when the movie is set, things are MUCH different. I laughed so hard the first time Barnabas saw a set of car headlights. I think that was my favourite line in the movie because it had both John and I in stitches.

There is some violence when Barnabas needs to feed. Remember he’s a vampire and is very thirsty after not drinking for almost 200 years. He kills all the construction workers who found him and later another group of “unshaven young people”. His words. That part was even a bit funny though and despite having to kill them to live, he still remains a likable character.

There’s also a bit of a love triangle. Baranabas falls head over heels with the young nanny staying in his family’s mansion. However, Angie (aka Angelique), a witch and his arch-nemesis who buried him for 200 years, is still around and  causing trouble for the Collins family with her rival canning business. I did not like Angie at all and wanted to see her fail and the Collins’ family win.

I also really enjoyed the movie being set in the 70s with all the 70s music, hairstyles, heavy makeup and clothing. Dark Shadows is a movie I would watch again for a good laugh!