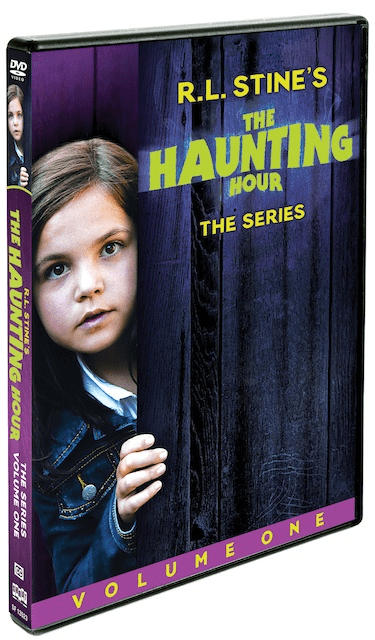 and R.L. Stine’s The Haunting Hour: The Series, Vol.2

This Fall, get ready for a hauntingly good time with the acclaimed television anthology series based on and inspired by the master of children’s horror, R.L. Stine. On September 4, 2012, Shout! Factory, in collaboration with The Hub TV Network, will unleash the highly anticipated R.L. Stine’s The Haunting Hour: The Series – Volume 1 and Volume 2 on home entertainment shelves nationwide, just in time to jump-start this year’s Halloween season! R.L. Stine’s The Haunting Hour: The Series – Volume 1 DVD boasts the first five spine-tingling episodes from the first season and special bonus content. More thrills and goose bumps continue in Volume 2 DVD with five more ghoulish episodes and new bonus features.

Delivering suspense, nervous giggles and captivating spooky family adventures, R.L. Stine’s The Haunting Hour: The Series – Volume 1 and Volume 2 DVDs feature some of young Hollywood’s biggest names as guest stars, including Bailee Madison (Brothers, Just Go With It), Connor Price (The Dead Zone, Will & Dewitt) and Grayson Russell (Diary of a Wimpy Kid and Diary of a Wimpy Kid: Rodrick Rules) to help coax you into keeping the nightlight burning bright. A must-have for loyal fans of the author, kids, and collectors, each DVD title is priced to own separately at the suggested retail price of $14.97.

“R.L. Stine’s The Haunting Hour: The Series” currently airs on Saturdays at 5 and 5:30 p.m. (ET) on The Hub TV Network, a television destination for kids and their families. The popular children’s anthology series recently received seven 2012 Daytime Emmy® Award nominations from the National Academy of Television Arts & Sciences.

Families everywhere will be won over with the charming chiller, as the series is the winner of the Parents’ Choice Award in Television programming for April 2012, proving that moms and dads everywhere are giving their seal of approval for Stine’s latest work. People everywhere love to be frightened, and this series brings the opportunity for families to come together to enjoy the bumps in the night that only R.L. Stine can deliver!

I remember reading a few of R.L. Stine’s books when I was a kid and my older daughter watched Are You Afraid of the Dark? so I knew a bit of what to expect when I sat down to watch The Haunting Hour. I love a good scare and have always been a fan of ghost stories and things that go bump in the night. My daughters were with their dad this week so I sat down by myself in the late evening to start watching The Haunting Hour by myself. John was a big chicken and didn’t want to watch it with me.

Volume 1 starts out with a two episodes title “Really You”. It’s about a spoiled little girl who gets a creepy doll that looks just like her as a present. “Lily B” is not an ordinary doll though. She’s actually a doll with an agenda- to take over Lily’s (the little girl) body. I don’t know what it is about dolls but they freak me out. There’s a few spots that made me jump. However, it wasn’t too scary that my daughters couldn’t watch it.

Another episode that I really liked was “A Creature is Stirring”. A little boy who feels his family is disconnected makes a Christmas wish for them to be a family again. A present magically appears under the tree and inside is the scary looking creature that reminded me of a Gremlin. I watched that movie when I was a kid and it scared me so this story gave me a chilly reminder of those evil creatures. The Gremlin thing wreaks havoc on the house scaring the family and destroying the home (which is an absolutely gorgeous home BTW!). In the end, though, the storyline comes together and we can see why what happened made sense even in a sick, twisted way.

However, I think the scariest episode was “Nightmare Inn”. A girl and her mom go check out this secluded abandoned inn that the mom is interested in buying. The girl meets the caretakers, a guy and a girl, who aren’t what they appear to be.

I loved how each episode was a new storyline with new characters. I recognized many of the actors from some of my favourite movies and shows. Overall, I really enjoyed R.L. Stine’s The Haunting Hour and I think it would make a great scary movie for the girl’s to watch at a Sleepover party this fall!