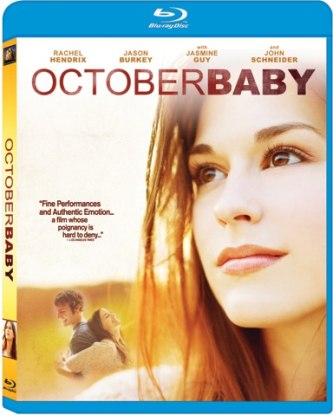 As the curtain rises, Hannah hesitantly steps onto the stage for her theatrical debut in college. Yet before she can utter her first lines, Hannah—unscripted—collapses in front of the stunned audience.

After countless medical tests, all signs point to one underlying factor: Hannah’s difficult birth. This revelation is nothing compared to what she then learns from her parents: she was actually adopted … after a failed abortion attempt.

Bewildered, angered, and confused, Hannah turns for support to Jason, her oldest friend. Encouraged by his adventurous spirit, Hannah joins his group of friends on a Spring Break road trip, embarking on a journey to discover her hidden past … and find hope for her unknown future.

In the midst of her incredible journey, Hannah finds that life can be so much more than what you have planned.

October Baby was very emotional for me to watch. It started out with Hannah finding out the reason behind all her medical issues: she was born prematurely at 24 weeks after a failed abortion and was adopted. My heart went out to Hannah. She was devastated and now understood why she always felt like she was unwanted.

Hannah decides to join her friend Jason’s road trip to New Orleans. Mobile Alabama is on the way and she learned from her birth certificate that it was her birthplace. Her dad is very overprotective and doesn’t want her to go. I can understand his concern because of Hannah’s many medical conditions and the fact that he doesn’t want her to get hurt. Then again, I can see why Hannah wants to go. She needs to find out where she came from.

On the road trip, they settle in for the night in a motel with Hannah rooming with Jason’s girlfriend. The girlfriend is incredibly rude to her and Hannah storms away into the night telling everyone to not bother following her. In my opinion, that was a little foolhardy of her since she didn’t have much money and it was dark out. The next day, Jason comes along with a rental car and picks her up. He tells her he is going to take her the rest of the way. I found that moment really touching and it shows that he is a true friend.

I found Hannah to be a little annoying and immature at times. For example, when Jason and her rent a hotel room, they want two rooms but don’t have the money to pay for it. Why not room together? If they are just friends nothing will happen. Maybe it’s just me, but this seemed strange since they have no money to even pay for two rooms. Then when they get to the room it only has one bed and it was a crisis. Jason ends up laying down to sleep on the floor with Hannah in the bed. Then they get into a  fight and Hannah storms out with pillow and blanket in hand and goes to the couch in the hotel lobby to sleep there. To me, that seemed really strange! And the fact that the hotel staff let her there was even weirder. Then Jason comes down and joins her on the couch and all is well. They wake up there the next morning surrounded by hotel guests.

One of the most poignant moments in the movie was Hannah meeting the nurse who was there with her mother for her abortion and for the delivery. That scene made me cry as the nurse told Hannah what happened. What Hannah learned devastated her. My tears flowed right along with her.

There’s a scene at the very end of the movie that had me sobbing even after the credits had finished rolling. I can’t say what it  is without ruining the story but let me just say that it touched me to the core. This movie is raw and heartwrenching with superb acting. I could feel their pain as my own. October Baby is one film that will stay with me.

October Baby was a novel written by Eric Wilson that was turned into a movie. Check out this Book to Film Discussion Guide: 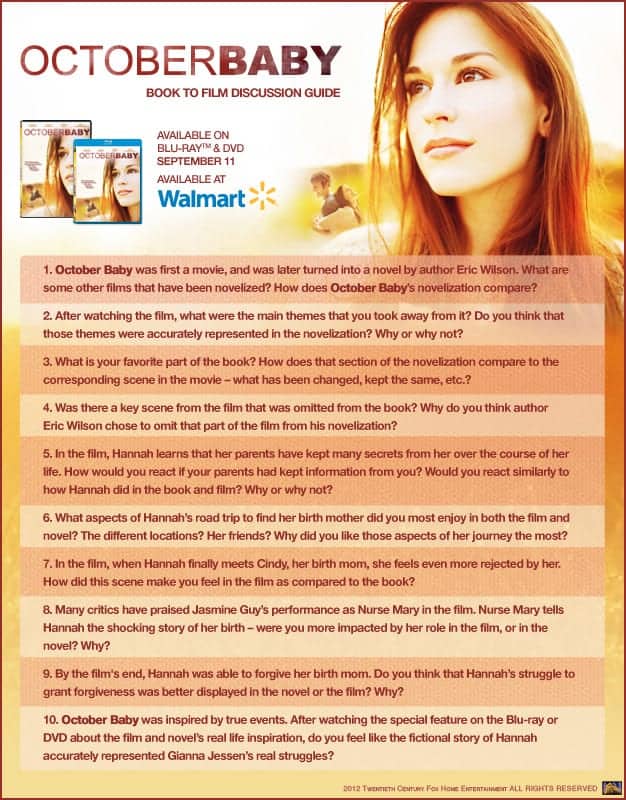