Highlights From My Trip to NYC #TheAvengersEvent

I spent last weekend in New York City with 24 other bloggers for #TheAvengersEvent. The highlight of our weekend was the closing night screening of Marvel’s The Avengers at the Tribeca Film Festival as well as interviews with two stars of the movie, Tom Hiddleston and Cobie Smulders.

I had the best time and am so glad I went. My reviewer, Jennifer, normally goes on the trips, but I wanted to go this time around to see what it was like. I was nervous since it was my first time travelling outside of Canada by myself. I was fine though. It was fast going through Customs and my luggage was one of the first to come out in the baggage area. Phew!

I had about an hour and half wait at the airport for my driver. It turned out he was waiting for me at Terminal C and I landed at Terminal A. I was so lost and had no clue that there was more than one terminal. Oops!

I think I was one of the last of the bloggers to arrive in NYC. Most of them had gotten there early that morning and were out sightseeing when I arrived at the hotel at about 4:30 pm. I headed to my room to lie down for a bit and then get ready to go meet everyone in the lobby at 7 pm for dinner.

We were staying at the Eventi Hotel located in Chelsea. I took some pictures of my room when I first got in. It was really nice! 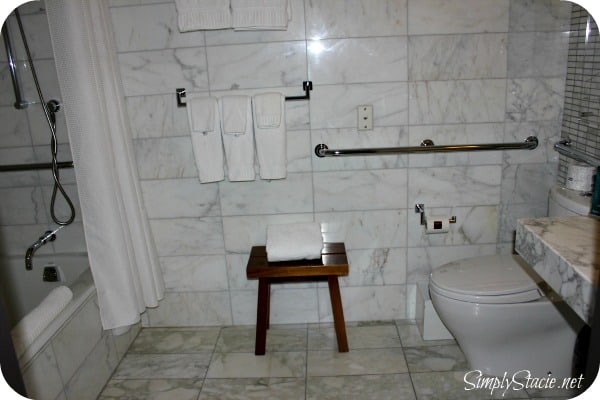 The bathroom was all marble and the tub had two shower heads. The rainfall shower head was amazing! I didn’t want to get out of the shower! 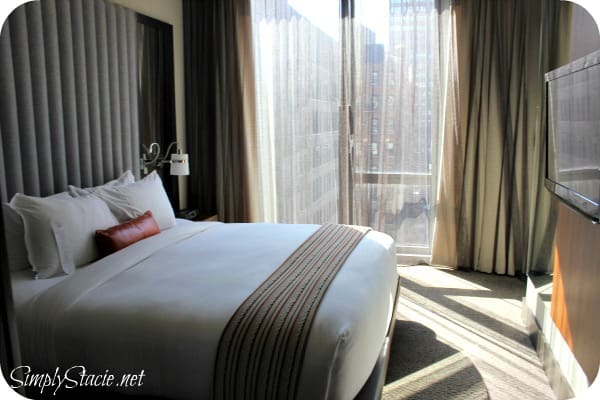 My room had a King Size bed that was super comfortable. I seriously miss that bed. 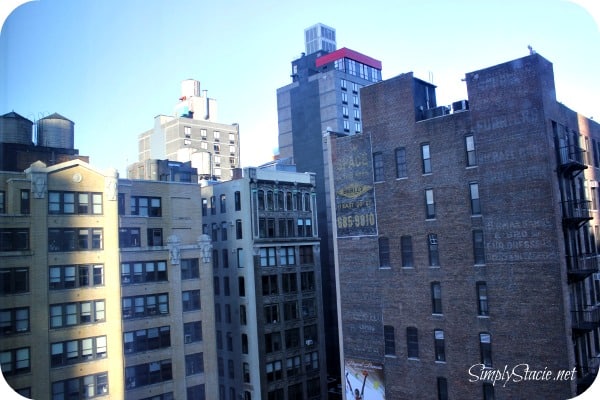 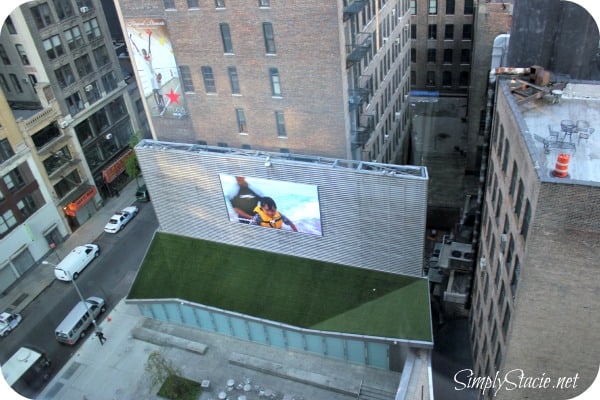 Views from my room on the 9th floor

I put on my Fangirl t-shirt and met all the bloggers down in the lobby of the hotel. For supper, we walked a couple blocks to restaurant/pub, Jack Demsey’s. Yolanda pointed a Tim Hortons on the way there because she knows how addicted I am to their coffee. NYC has six Tim Hortons according to the Timmy Me app on my phone.

We sat upstairs in the restaurant and I had fun getting to know the other bloggers.

Here’s Leanette from Teach Me 2 Save… 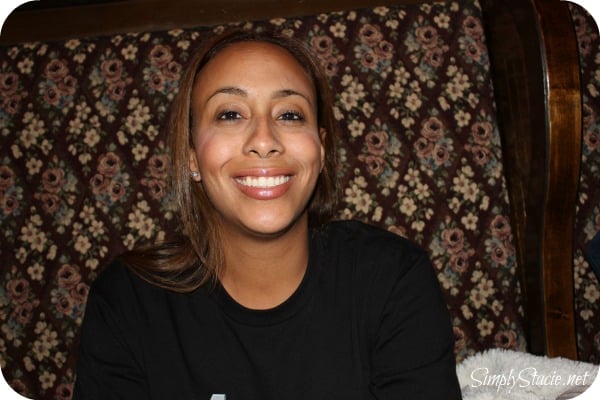 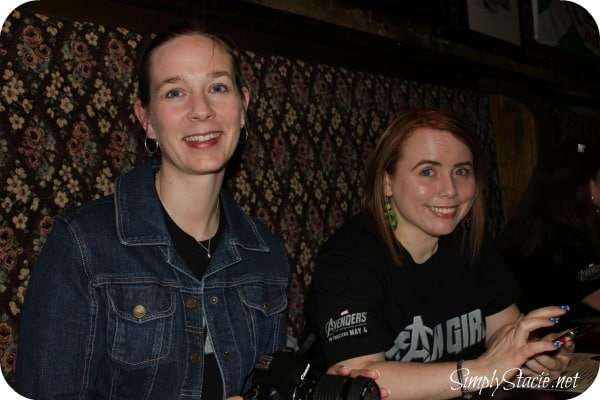 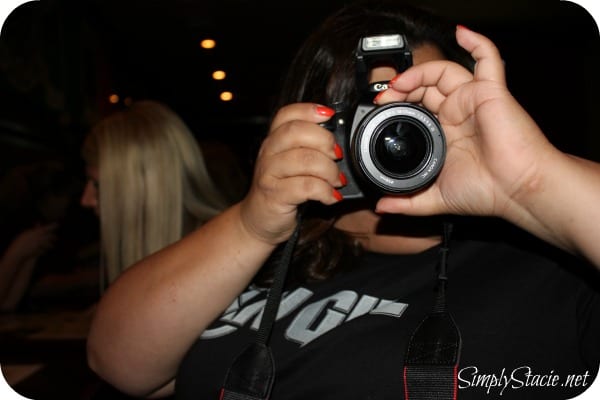 For an appetizer, Yolanda and I shared Fried Calamari with Wasabi Mayo and Marinara sauce. My goodness was it good!!! It’s been so long since I ate calamari. John was jealous because he’s crazy about it. 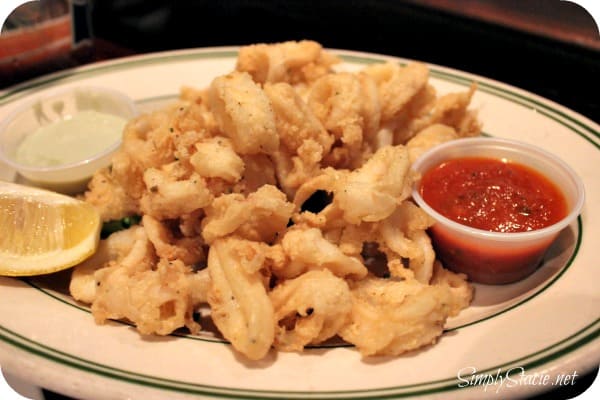 For the main course, I order Pan Roasted Salmon with Lemon Tarragon Garden Sauce. It was served with steamed veggies and rice. Yum! 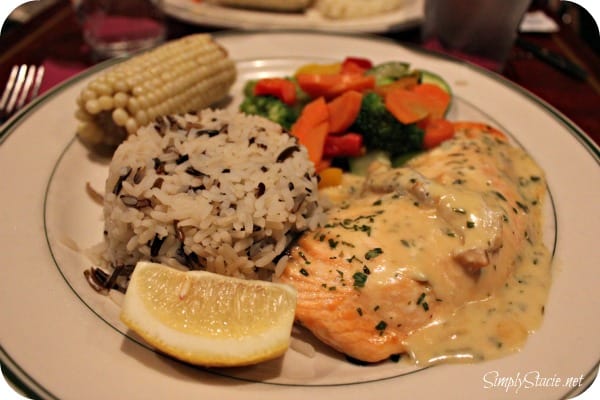 Here’s Yolanda and I after supper in our Fangirl tees… 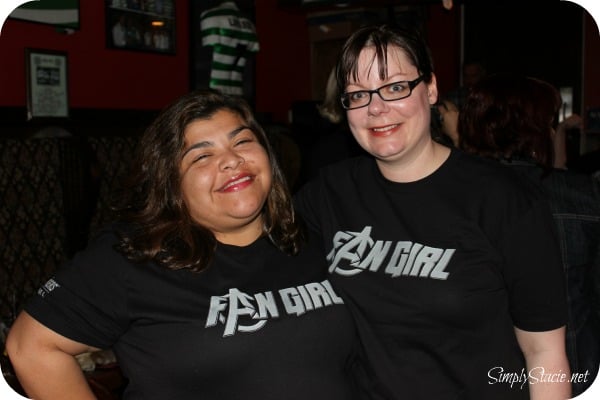 And Jen from Eighty MPH Mom. I met her last year at BlogHer and it was great to be able to get to know her better. 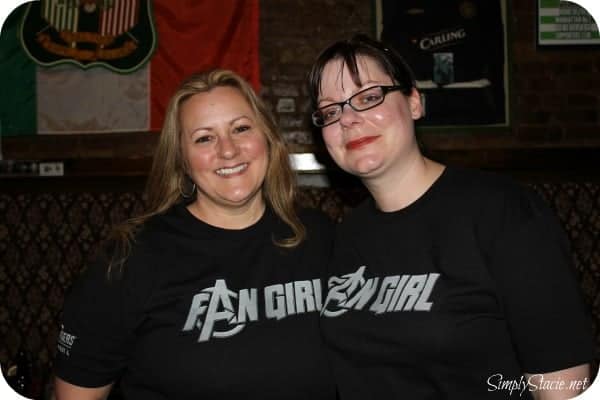 The next morning I got up really early and ordered some breakfast from Room Service. Delicious bacon, eggs, coffee and all the fixins’. 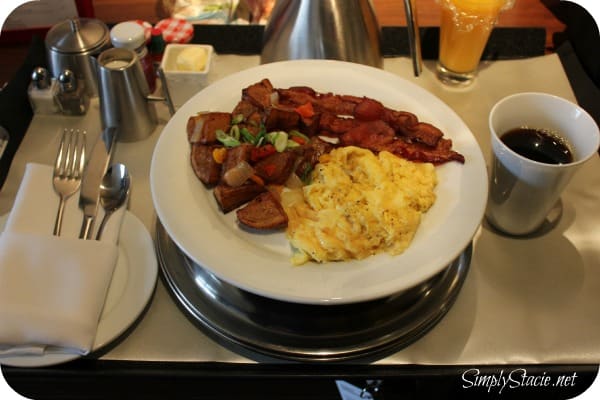 I met with a few of the bloggers and we caught a cab to Central Park. Visit my post for all the pics!

After spending a few hours walking around Central Park, we took a roundabout cab ride to Battery Park. We think the cabbie took us the long way to get more money. It was a frightening ride with him texting and driving!

At Battery Park, I couldn’t believe how LONG the line was for the ferry of Staten Island. All I could get was this picture because we did not want to wait forever. 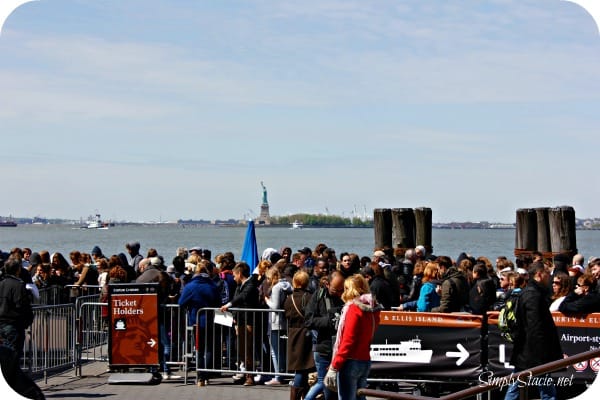 We bought some nuts from a vendor and were feeding the pigeons. Then a squirrel came up to us and started begging for nuts. It was so cute the way he was up on his hind legs as if to say, “please?”

Jen from Eighty MPH Mom went to get him a nut and I guess she wasn’t fast enough for his liking because this squirrel JUMPED on her leg. I screamed because it freaked me out!!! Luckily she was wearing pants and she didn’t get bit or scratched. The squirrels in NYC are aggressive! Yikes. 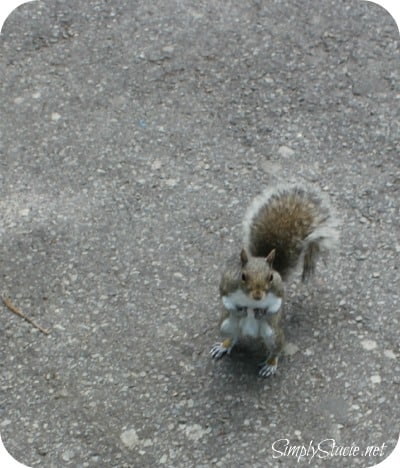 Also in Battery Park was the Sphere which used to be located at the World Trade Center. I actually do remember it from the WTC when I was there in 2000. 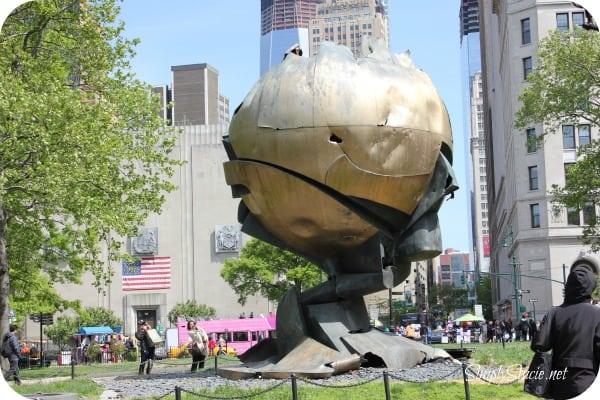 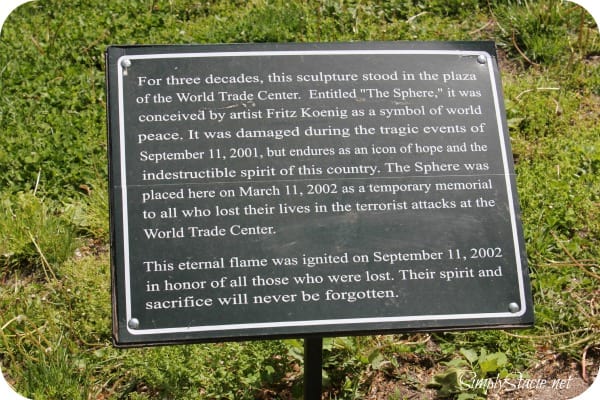 That afternoon, we went to the Trump Soho Hotel to interview Tom Hiddleston (Loki) and Cobie Smulders (Maria Hill).  When we first got to the hotel and were waiting in the lobby, Robert Downy Jr. walked right by us! I didn’t really get a good look because I didn’t realize it was him till after the fact.

The interviews took place in the Penthouse suites and wow what a view they had! Trump Soho Hotel owns the air rights in that area so no other building can ever be taller than it. I took some pics with my phone of the view and one of the bathrooms. 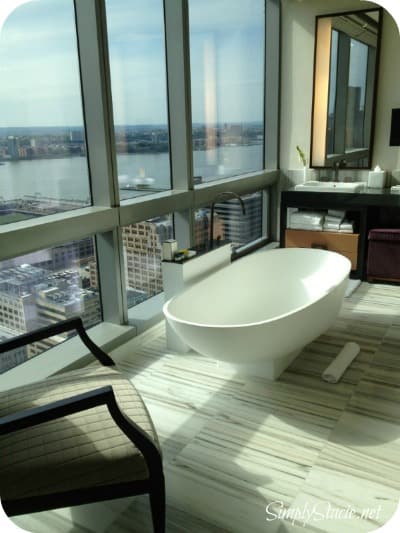 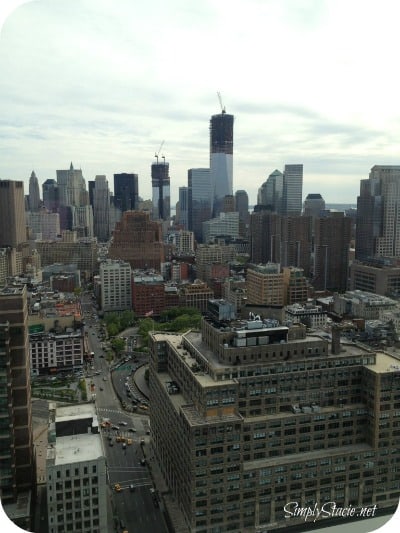 After the interviews we went back down to the lobby but couldn’t go outside because of the paparazzi! It was insane!!! They were waiting for Robert Downy Jr. to come down and when he did they were shouting his name. There was even a topless photographer?! I didn’t know if going topless is illegal or not in New York, but it was a strange sight for all of us to see.

Our next stop was the Tribeca Film Festival to see the closing night screening of Marvel’s The Avengers! You can see my coverage about the heroes, the stars and a review of the movie. It was a night that I will never forget!

The next day, we went to the Disney screening room to watch two movies, People Like Us and The Odd Life of Timothy Green. Both were incredible. I cried during each one and can’t wait till they come out so I can watch them again. We also had a chance to talk to the Academy Award®–nominated director/writer Peter Hedges about The Odd Life of Timothy Green. I’ll be sharing more info about that once we get a little closer to the release of the movie.

Our lunch was catered by Lenny’s Deli. I had a sandwich with cracked pepper turkey, turkey pastrami, jalapeno Monterey jack, lettuce, tomato, onion & capers and it was delicious! Sprinkles also provided us with People Like Us cupcakes.

I was sad when I had to head back to the airport. I had so much fun!

I had a bit of a scare on the plane though! They overbooked so one person couldn’t board. Then when we were all seated on the plane, the flight attendants told us that five people had to get off. No one was volunteering. I only had travel insurance till the 29th and knew John would be at the airport waiting to pick me up so I didn’t want to volunteer. Eventually 5 people said they would get off (they got a $700 travel voucher for anywhere United flies though!). I’m just glad that they didn’t have to start randomly pick people to leave. That’s never happened to me before but apparently it’s pretty common according to the guy in the seat next to me?!

Marvel’s The Avengers debuted last night in theatres! Make sure you go see it if you can! I’m bringing my kids and John to see it this week so they can see exactly what I’ve been raving about since my return.