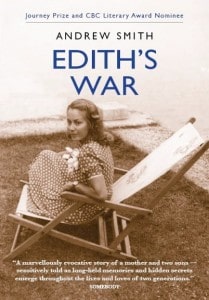 Edith’s War is a World War II historical drama with a fictional story overlaid upon events that took place in Great Britain in 1940. The book flashes between Edith Maguire’s war experiences during that time and her two sons, Will and Shamus Maguire, as they venture to Italy in the year 2002 for a meet-up with Mum.

Edith is pregnant as her story opens in April of 1940. Her husband is fighting in the war and Edith lives with Joe’s mom, next door to the Italian Baccanello family. The flashbacks to 1940 tell of the trials of the Blitz in England, alongside the developing friendship between Edith and the Baccanellos, despite the animosity building quickly towards all Italians in the country.

The Will and Shamus portions of the story delve into the men’s backgrounds and experiences as they endeavor to catch up with each other. They are summoned to Verona, Italy by a phone call from their mother, Edith, and many things are hashed out as they await her arrival.

While the story goes back and forth between time periods almost every chapter, which I find disturbing in any book, you start to get a feel early on for the inevitable conclusion to the family saga. The back story, though, of the cultural problems in World War II Britain is what grabbed me and held me

As a history teacher, I have read many, many stories and first-hand factual accounts of World War II. I had never heard of the British internment of Italians, though, and especially of the tragic sinking of the British internment ship Arandora Star by a German U-boat on June 2, 1940. Of course, I had to run right to the history books to find out if this were indeed true. Sadly, it was. The former luxury cruise liner was pressed into service as an internment ship and housed 1,216 detainees, mainly Germans and Italians living in Britain at the time, as well as POWs. It was on its way to deliver the occupants to Canadian internment camps when disaster struck off the coast of Ireland. Only 586 of the internees survived.

The big story in World War II, and rightly so, is the Holocaust and the hatred towards anyone of Jewish descent in Nazi Germany. Other prejudices pale in comparison. Sometimes, though, I don’t think we even consider that our allies rounded up, detained and transported legal immigrants. Most of the Germans and Italians detained on the Arandora Star were peaceful British citizens or workers legally in the country. It was felt that they were simply too great a risk to national security once Hitler and then Mussolini came to power in Europe.

If you like World War II history, you will enjoy this book which is chock full of it. The history of the period, though, the early days of World War II in Britain, is something you usually don’t read about other than in horrifying tales of the London Blitz. Edith’s War gives you a very different take on that period.

Carla Ives is a blogger/author/teacher/editor/Jill of all trades and master of a few. She studied history at Drexel University and still teaches it… occasionally. You can usually find her writing business promotional items at GhostWriteHer or writing as the Atlantic City Pop Media Examiner for Examiner.com. She also hangs out on Facebook and Twitter while she attempts to figure out the far end of this thing called life. You can contact Carla at [email protected] if you dare!

Carla Ives is a blogger/author/teacher/editor/jill of all trades, master of a few. She studied history at Drexel University and still teaches it. . . occasionally. You can usually find her scribbling on her blog, The Reluctant WAHM (http://thereluctantwahm.com) or writing business and promotional items at her business, GhostWriteHer (http://GhostWriteHer.com). She also hangs out on Facebook and Twitter while she attempts to figure out the far end of this thing called life. You can contact her via email at [email protected]