I have to admit that I was a little nervous about seeing the new Disneynature film, Chimpanzee. I’m extremely sensitive, but especially when it comes to animals. In the past, I have avoided any sort of real life nature show or film because I don’t want to face all of the hardships and dangers that wildlife faces just to survive another day. 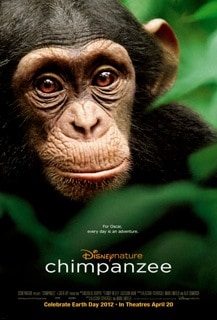 I had my waterproof mascara and a fistful of tissues, and I was bracing myself for the inevitable: sobbing and cascades of tears rolling and splashing down my cheeks. Chimpanzee is rated G, however, and very few tear triggers play out onscreen. Most of the really gritty stuff happens offscreen, and I was extremely grateful to Disneynature for handling it in such a sensitive manner. 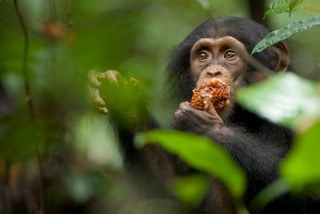 Oscar braves getting stung by bees for something sweet to eat

Chimpanzee was filmed somewhere deep in the forests of Africa, and follows the life of an adorably expressive young chimpanzee named Oscar. It was impossible not to fall in love with Oscar, who shares a touching bond with his mother, Isha. The Disneynature filmmakers capture tender moments between the two as she grooms him, feeds him, and keeps him close to her.

Food has become scarce for this group of chimpanzees, whose leader is an older chimpanzee named Freddy. So that they do not starve, the group must leave their territory and encroach on a rival chimpanzee’s area. The rival chimpanzee group, led by Scar, attacks Freddy’s group later on. During the fight, Oscar’s mother disappears and he is left to fend for himself.

Oscar has little chance to survive unless someone takes him in, but he is rejected by the other older females. Just as it seems that Oscar’s life will slowly and horrifyingly come to an end, a surprising caregiver steps in and bonds with Oscar. 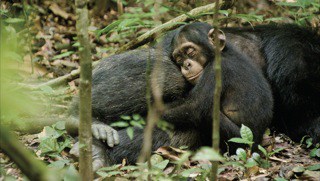 Oscar enjoys a tender moment with his caregiver

Like the chimpanzees themselves, Chimpanzee is filled with playfulness and sincerity. It is a story of courage, survival, and love. No overtly scientific terms are used, and chimpanzees are presented in such a way that even the youngest film goer will be able to comprehend what life as a chimpanzee is like. As a mother, I would be more than comfortable allowing my 4-year-old daughter to see this film. Kids her age and probably even younger will become just as engaged in this African wilderness story as will the adults. If your child is particularly clever, he or she might even recognize the voice of the narrator: Tim Allen (Buzz Lightyear!). The narration is a careful balance of the danger these chimpanzee tribes face, mixed with the innocence of their every day lives.

Chimpanzee is a must see family film; if you see it between April 20th and April 26th, a portion of the proceeds will be donated to the Jane Goodall Institute to protect chimpanzees and their homes. Take the pledge today!

Chimpanzee is in theatres everywhere on Earth Day (April 20th, 2012). To enquire about purchasing tickets in advance, call 1-888-Disney6 for details or log on to Disney.com/Chimpanzee.)

*Disney/Pixar provided me with an all expenses paid trip to San Francisco to attend an advance screening of Chimpanzee. All thoughts and opinions expressed are entirely my own.*