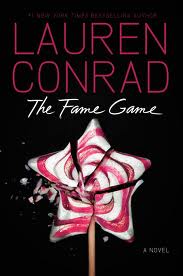 Lauren Conrad’s series L.A. Candy has been on my to-read list for well over a year, but I didn’t know anything about the author herself until I received a copy of her latest title, The Fame Game. I do not follow reality TV stars (other than the Kardashians, but it’s kind of hard to escape any news of them because they are all over the celebrity gossip sites I frequently waste my time perusing), so it kind of became a bit of a shock to me when I learned that the author, Lauren Conrad, is a former reality TV star. I have to honestly say that this made me less excited to read The Fame Game and her L.A. Candy books.

The Fame Game reality TV series will follow Madison, Gaby, Kate, and Carmen as they each pursue different dreams in Hollywood. Carmen has just landed the lead role in a movie, Kate is an aspiring singer/songwriter, and Madison and Gaby were on L.A. Candy together. I’m not quite sure what kind of Hollywood careers that Madison and Gaby are after, exactly.

The Fame Game is written in 3rd person, but I felt that readers would get to know and understand each of the girls better if Conrad had chosen to write this in 1st person, alternating between their narratives, instead. Madison and Kate were the most memorable characters for me, Madison mainly because she is the complex “Mean Girl” sort of character, and Kate because she is the sweet girl who doesn’t yet realize that fame comes with person sacrifices. Kate is currently a nobody (but this may change once The Fame Game becomes popular), and she is unable to publicly see an “on the verge of making it” actor because she could possibly be bad publicity for him. Instead, she has to watch her co-star Carmen pretend to date him, and it is devastating for her. I was liking Luke at first, until he made a bad decision regarding Kate that I couldn’t agree with.

Madison is a difficult character because there were times I both liked her and disliked her. She desperately wants to be someone because she comes from humble roots, but I hate the way that she lets the TV producers mess with her personal life. The return of her estranged father shows off Madison’s vulnerabilities, and I really wanted to slap her for making some really bad decisions on his behalf.

Why anyone would ever agree to go on a reality TV show is something that I will absolutely never understand. If anything, The Fame Game is a good book to read to understand how the people filming the show manipulate what happens in the series. The stars of the show are given “suggestions” on what to talk about, how to act, where to look, and more. Very little of what is seen on a reality TV show is actually reality.