The Secret World of Arrietty Review

When I visited L.A. in September for a special screening of Real Steel and interviews with the cast and crew of Real Steel and The Muppets, I also got to see an exclusive screening of Studio Ghibli’s latest Miyasaki film, The Secret World of Arrietty. It has already been released overseas, but will be in US theatres beginning February 17th, 2012. 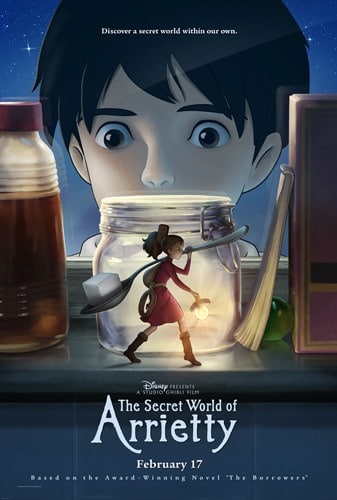 The Secret World of Arrietty is based on Mary Norton’s award winning 1952 novel The Borrowers. I haven’t yet read the novel, so I cannot tell you of the similarities and differences between the two. The Miyasaki film takes place in present day in Tokyo, where a sick little boy named Shō has come to stay with his great aunt. It is the same house where his mother lived in when she was a child, where she imagined that tiny people lived in the walls, and where a dollhouse made just for them with working ovens still exists. But the little people never came to live in that house. When he first arrives, he notices a cat attacking something in the bushes. This is his first glimpse of Arrietty, one of the tiny people who lives underneath the floorboards of his family’s home.

Arrietty has been warned that humans only cause harm to people like her, the Borrowers. Borrowers take small things that the humans have dropped and forgotten about, as well as supplies (sugar, tape, etc.) that they will never miss. Shō makes it known to Arrietty that he means her no harm, but Arrietty’s father and mother decide it is time for them to move on because they have been discovered.

I have to be perfectly honest with you guys; I do not like animé, and when I learned we would be watching The Secret Life of Arrietty, I grimaced at the very thought. I’ve watched Miyasaki films before, and I never cared much for them. I was intrigued by the premise of this one, however, and so I kept a mostly open mind when we went into the screening room and sank into some very comfortable chairs.

Arrietty proved to be a heroine worth rooting for. She is brave, strong, and curious. Her curiosity is what gets her into trouble a few times, but through this, she learns that not all humans mean harm to her kind.

Shō will absolutely break your heart. Here is a boy who believes he is dying, that he has nothing to live for. But his discovery of Arrietty and their tiny world beneath the floorboards seems to give him a strength he didn’t have before he arrived.

The Secret World of Arrietty is charming, beautiful, and simply a great accomplishment. I never thought I would ever like animé, but after seeing this film, I cannot think of any other way that it could have been made to inspire such a reaction out of me. I admit when we left the screening room I was wiping away tears. This movie is such a marvelous tribute to what I am sure is an amazing children’s fantasy novel. Because of this film, children and adults everywhere may be reintroduced to Mary Norton’s beautifully imagined world.

Have you ever had small items go missing in your home? Have you ever believed in the possibility of tiny people like Arrietty and her family?

*Disney/DreamWorks provided me with an all expenses paid trip to Los Angeles for a special screening of this film. I received no compensation for this post, and all thoughts and opinions are my own.*