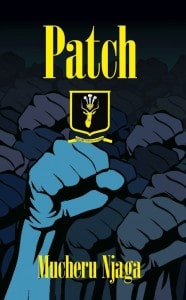 Title: Patch – Assumption is a crime

Too often when watching the news headlines, there are stories of bullying in schools. In his debut novel, Mucheru Njaga gives a fictional account of hazing, bullying, and abuse that occurs in the same prestigious boarding school he attended, Prince of Wales Boarding School, nicknamed “Patch”.

Patch tells a very powerful story, but disappointingly, Njaga’s writing technique and the editing for the finished copy left far too much to be desired. The characters were bland, including the hero of the story, Gabriel Taylor. I felt little emotion for the characters because they were not very well developed, and the unpolished writing kept distracting me and pulling me out of the story. After a while, all of the mistakes that Njaga’s editor missed kept piling up and piling up; if there had been a red pen anywhere near me, I don’t think I could have resisted correcting all of the errors.

The pacing of this short novel is pretty quick, until a rugby match between the freshman and the seniors occurs within the last third of the book. I got bored very quickly with it, and had to fight myself against skimming those pages to get back to the story that truly mattered to me.

The beginning and the ending tie in very nicely with each other, but only if you happen to remember the name of the principal who sends Gabriel overseas to attend Patch. (I didn’t, but…it’s important, so if you choose to read this, pay attention.) Speaking of that principal, I’m a little bit disgusted with him because of what eventually happens to Gabriel. I would have expected the principal to be a little bit less selfish, but he was only thinking about himself, and not Gabriel’s welfare.

I truly wish that Patch had fallen into the hands of a literary agent that recognized how amazing of a book this could be, and had found a talented editor to whip it into shape. In its current condition, I’d call it a rough draft. There is much potential here, but overall, it just wasn’t a well-written book.