A Thousand Voices, A Single Dream | Steve Fickinger and the Broadway Adaptation of Newsies

It’s been almost 2 months since our trip to New York City, and I am finally able to share with you some exciting news about Disney’s newest Broadway show, Newsies. You may recognize that title if you are familiar with the 1992 film of the same name starring Christian Bale as Jack Kelly, one of many young boys who worked on the streets selling newspapers to supplement their families’ meager incomes.

We met with Steve Fickinger, the VP of Creative Development and Licensing, who took us step by step through the process for adapting Newsies for Broadway. Advance tickets go on sale beginning on January 30th, previews start on March 15th, and the official opening night of the show on Broadway is March 29th. The end of the run is June 10th, but if the show is well received, that could mean a longer run. 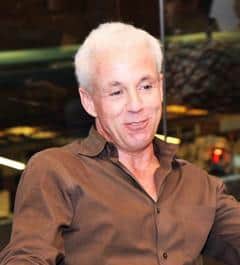 As the VP, it’s Steve’s job to find a writer, lyricist, and composer and determine how much time will be devoted to completing each step in the process of making a musical. The Broadway show of Newsies has been in development for 7 years.

Although I personally can’t think of a single person that doesn’t love the film Newsies, Fickinger told us that it was a huge failure, only bringing in about $3 million and leaving movie theatres after only about one week. 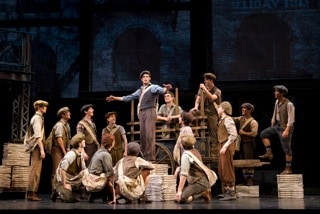 Newsies is the #1 requested show for stage adaptations when people request to do school plays/musicals, dinner theatre, or performing arts center. But until now, there was no stage version of it available for the public to use for such events.

It took about a year before Fickinger was able to arrange a meeting with the people he wanted to involve in creating the stage adaptation of Newsies. Though he originally wanted the film writers Bob Tzudiker and Noni White to adapt it for stage, they politely turned down the opportunity, but still expressed a desire to participate in the process. Ultimately the writing job went to Harvey Fierstein after a chance encounter with Newsies composer Alan Menken. 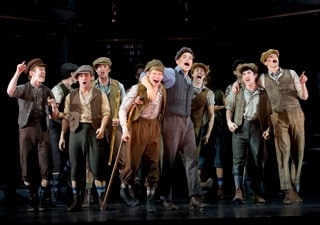 Fickinger had not actually seen the film version of Newsies before beginning work on it. About halfway through watching the film for the first time, he felt that the story began to fall apart. “I was firmly of the belief that what people remembered about it was songs, the emotion, sort of the bravado…” he said of why he believes people remember and love this film. 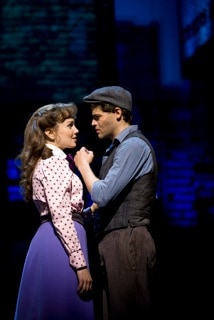 They were given some room to make some changes to the overall story line, and their first read through of the new script took place in May of 2010. After the first read through, they determined there was still work to be done on the script. Their goal was to prepare it for a regional showing to see how well it would do before determining whether or not to make it available to more areas.

The reviews from papers like New York Times, Entertainment Weekly, and New York Magazine gave terrific reviews of the stage adaptation of Newsies. Based on those reviews, they decided to move the show to Broadway. Previews of the show will begin on March 15th, and curtains will officially open on March 29th. 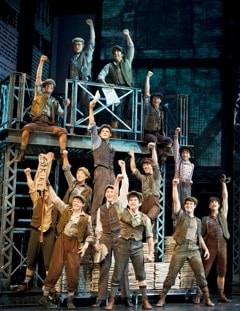 “I want however long it’s open, be it ten weeks, twenty weeks, thirty weeks, I want it to be great. And I’m really, really proud of the show,” Fickinger said. “It is in the best sense of the word, I think, an old fashioned musical.It has tap dancing, it has dancing, it has soaring ballets, it’s got toe tapping tunes, and it’s got a story that is oddly, and, and sort of fantastically timely…I do believe in heart, I do believe in humor, I do believe in emotion, and I think Newsies has all those things, so I think it’s gonna be terrific.”

*Disney/DreamWorks provided me with an all expenses paid trip to New York City to attend a Broadway show, the War Horse World Premiere, and to conduct interviews. Any thoughts or opinions expressed are entirely my own.*