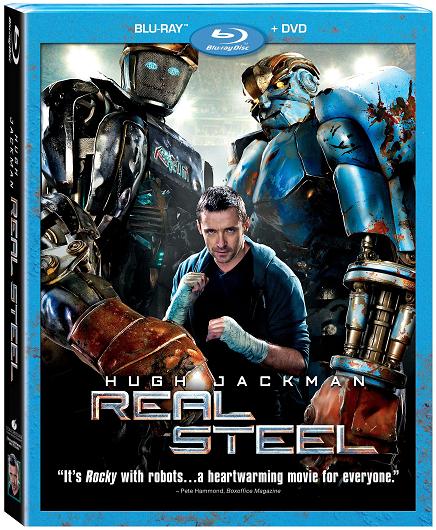 Real Steel was one of my favorite films of 2011, and now it’s finally available on Blu-ray/DVD as of January 24th, 2012. Real Steel is set in the future in a world where robot boxing has taken center ring because humans prefer edgier, more brutal battles (robots can survive illegal hits that would do a human being in). Charlie Kenton (Hugh Jackman), a washed up boxer, barely squeaks by scraping in a living from traveling around from town to town with a battered and beaten up robot that he operates by remote control for non-league fights.

Charlie’s vagabond lifestyle is interrupted when he finds out that his 11-year-old son Max (Dakota Goyo) has lost his mother. Not thinking himself fit to be a father, Charlie readily gives Max up to Max’s aunt and her wealthy husband. But there’s a catch–Max must stay with Charlie for the summer. In return, Charlie is paid a tidy sum, which he uses to purchase a new fighting robot.

Though they don’t hit it off at first, Charlie and Max soon begin bonding over their passion for robot boxing. Max proves himself more than adequate in training a shadow robot (Atom) that he finds in the scrapyard. Charlie programs the robot with his own boxing moves, and eventually Atom–an unlikely champion–works his way to the top to a fight with Zeus, the long standing WRB title holder.

I love Real Steel because it is the type of movie that will appeal to all generations. In the beginning, I wasn’t invested in the robot boxing aspects, but I was interested in the relationship between Charlie and Max, and also the subtle romance between Bailey (Evangeline Lilly) and Charlie. Eventually, though, when Atom began taking the ring, I became breathlessly caught up in the fights. I wanted Atom to win because Max believed in him so much, and had worked so hard to get him that fight with Zeus. My 3-year-old daughter has been playing with a robot action figure from this movie for months, and when she finally got to see her robot fight, she was excited.

Real Steel is a movie that I can happily watch over and over again. I still had a lot of questions once the movie ended, and I would love for them all to be answered in a sequel. Some of those questions include: Who built Atom? What will happen to Max’s custody arrangement? Will Bailey and Charlie get married? What’s next for Zeus? How did the fight between Atom and Zeus affect the world of robot boxing?

Deleted and Extended Scenes I knew about the “butterfly” story line from my trip to Los Angeles last summer, and I was eager to finally see these scenes. If they’d made the final cut, I would have been bawling in the theatre. There is also an extended scene with the 3 little girls at the beginning of the film where Ambush is introduced. Director Shawn Levy introduces all the scenes and explains why they were removed from the final production.

Countdown to the Fight: The Charlie Kenton Story I absolutely love this feature! Charlie Kenton, Finn, Max and Ricky are interviewed for an exclusive look into Charlie’s former boxing career. A lot of these small details didn’t make it into the movie, so I appreciated getting a more in depth look at why Charlie is the way he is.

Bloopers Some funny footage with Hugh Jackman, Kevin Durand, Dakota Goyo and the rest of the cast messing up on their lines.

Making of Metal Valley Shawn Levy shows viewers footage of them building “metal valley” (where Max found Atom buried in the mud), filming stunts, and determining the volume of mud and rain used to make the scene believable.

Building the Bots is a feature that explains why real robots were used in addition to CGI. Early on, Steven Spielberg gave director Shawn Levy advice that the actors needed something tangible to act in scenes with, and suggested they build robots to scale. Shawn Levy introduces viewers to the incredible visual effects team that made the robots possible.

Real Steel Second Screen While you are watching the movie, your iPad can interact with the Blu-ray and give you even more information about the film as you are watching.

Audio Commentary with Shawn Levy Get behind-the-scenes information about Real Steel from director Shawn Levy while you watch the film.

*I was not financially compensated for this post. I received a sample of the product for review purposes. The opinions are my own, based on my personal experience with the product.*