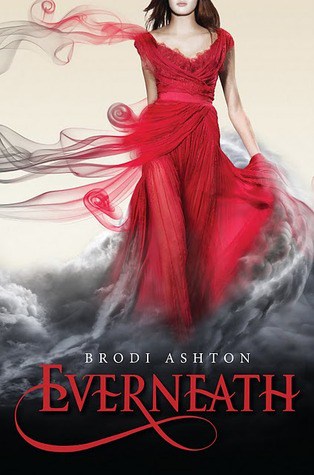 6 months ago, Nikki Beckett, daughter of the city mayor, disappeared and left her boyfriend, Jack, brokenhearted. Now she has returned, but neither Jack nor Nikki knows if they can repair the relationship that they once had. There is much speculation about what happened to Nikki, most of it drug-related. What Nikki cannot tell them is that she was in a place called the Everneath, being fed upon by a horrid creature known as an Everling (an immortal being).

Brodi Ashton’s Everneath was a fun read for me because it’s set in my home state of Utah, in Park City. I don’t spend much time in Park City, but I love that she chose to set a paranormal romance in Utah. Brodi Ashton also lives in Utah. Everneath is a mash up of two well known Greek myths: Orpheus and Eurydice and Persephone and Hades. Ashton seamlessly weaves the two tales into one, and by the time I reached the last page, I had wet eyes.

I enjoyed all of the characters, but Nikki was difficult to like at times. Her insecurity regarding her relationship with Jack, who had a reputation for being a ladies’ man, is what got her into all this trouble in the first place. Her rival, Lacey Greene, wasn’t much help either. Even as Jack proved himself to her time and time again, she still seemed to doubt him. I loved hating on the character of Cole. He’s creepy, stalker-like, and totally evil. I’m thrilled that there is no love triangle between these characters because I dislike him so much and he has no redeeming qualities.

There were a few things I found frustrating as I read, however. The sequence of events is not chronological; a lot of time and chapters pass before we find out exactly how and why Nikki ended up in the Everneath in the first place. I felt the story didn’t begin in the appropriate place; for me, it would have made more sense to start with Jack’s betrayal and then Nikki giving in to Cole’s desires because of her assumptions. It took longer than I had liked to get a basic idea of how Everneath and the various creatures in it work. I’m still a little confused about why Everlings like Cole’s friends would even work together. What do they have to gain by their alliance?

I enjoyed Everneath enough that I will be reading the rest of the series, and am crossing my fingers that the next book will not be as confusing to me as the first on was.